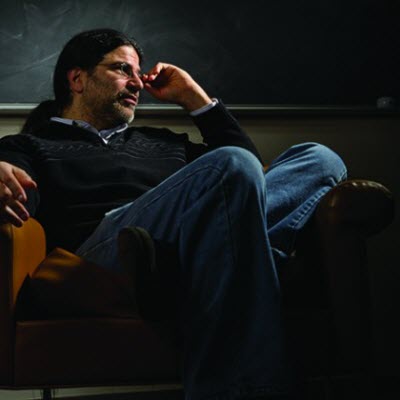 David Kaplan.MATT ROTHDavid E. Kaplan, a Johns Hopkins professor, theoretical particle physicist and documentary producer, received the 2015 Alfred I. duPont-Columbia University Award in Journalism for his contributions to the production of Particle Fever. Kaplan and the cast and crew involved with the production were given the award for producing the feature-length documentary about the identification of the Higgs boson at the Large Hadron Collider near Geneva, Switzerland, in 2012. Particle Fever was one of 14 journalistic works to receive the prestigious award in 2015.

Particle Fever was selected by the duPont jury from hundreds of entries and evaluated by a board of viewers. Winning documentaries are honored for their storytelling and impact in the public interest. The documentary article received critical acclaim for making complex theoretical arguments about particle physics comprehensible. The film was shot over seven years and follows both experimental and theoretical physicists as they approach the announcement from the European Organization for Nuclear Research (CERN), of the confirmed existence of the Higgs boson, also known as the "God particle."

"Our goal was to make a film that allowed people to experience my world through this dramatic time in scientific history, which I suppose is an ideal for journalistic reporting," said Kaplan, "We are honored and very excited to receive this award."

Daniel Reich, chair of the Department of Physics and Astronomy, credits Kaplan with making a critical event in particle physics accessible to the general public.

"David is most deserving of this award. His film illustrates the many human stories behind scientific discovery," Reich said.

Kaplan received his PhD from the University of Washington in 1999. After postdoctoral positions at the University of Chicago/Argonne National Lab and the Stanford Linear Accelerator Center, he joined the Henry A. Rowland Department of Physics and Astronomy in Johns Hopkins' Krieger School of Arts and Sciences in 2002.

Kaplan has been named an Outstanding Junior Investigator by the Department of Energy, a Kavli Frontiers Fellow of the National Academy of Sciences, and a Sloan Fellow.