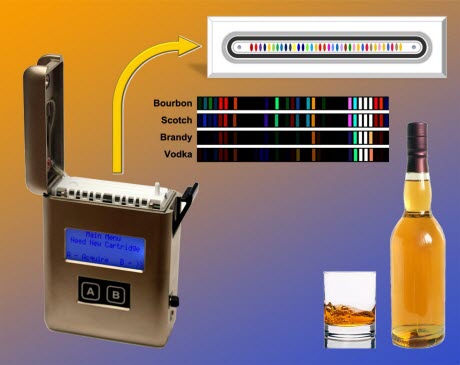 A portable device with an advanced sensor can "sniff" out counterfeit liquors.Image credit: Kenneth S. Suslick, PhDWatered-down or fake liquors can reap financial rewards for nefarious individuals, but the adulteration of liquor cheats consumers and can even lead to health hazards from added contaminants. Scientists now report in ACS Sensors a portable device with an advanced sensor array that can identify liquors and determine if they'd been altered, offering a strategy for liquor quality assurance.

In the past few years, deaths from contaminated alcohol have been reported in Indonesia, Mexico, China, Poland, and Russia, among other places. Unscrupulous individuals hoping to make a profit may homebrew liquor and bottle it in official-looking packaging or dilute liquor with anything from water to antifreeze. Kenneth S. Suslick and Zheng Li from the University of Illinois at Urbana-Champaign wanted to address this growing health concern by engineering a device that can easily identify tainted products.

The researchers developed a disposable sensor with 36 dyes that change color upon exposure to particular components in liquor. Partial oxidation of the liquor vapors improved the sensor's response. Using a handheld image analyzer to detect these color changes, the scientists correctly identified the alcoholic content and brand of 14 different liquors, including various scotch whiskies, bourbon, rye, brandy, and vodka with greater than 99 percent accuracy. In a proof-of-concept experiment to demonstrate a real-world application, the researchers also sniffed out booze that had been watered down, even by as little as 1 percent.