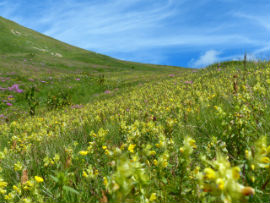 Rhinanthus, Castle Hill National Nature Reserve in Sussex.Photo courtesy of the University of YorkBy altering the densities of  the hemiparasite (a parasitic plant that also photosynthesises) Rhinanthus minor, in the Castle Hill National Nature Reserve in Sussex, ecologists from the Universities of York, Sussex and Lincoln were able to assess the impacts of the ‘vampire’ plants on the biodiversity of a species-rich semi-natural grassland.  The scientists compared the plant and invertebrate communities in areas where R. minor was removed, left at natural densities, or increased in abundance.

The results, published in the journal Ecology, show for the first time the positive effects of a ‘vampire’ plant further up the food chain – not only on other plants, but also on animals feeding on dead plant and animal matter, herbivores and their predators.

Lead author, Professor Sue Hartley, of the Department of Biology at York and Director of the York Environmental Sustainability Institute, said “This was a really unexpected finding. Although hemi-parasites are known to increase the diversity of other plants in the community by suppressing the dominant species they parasitize and so allowing other plants to flourish, none of us predicted there would be such dramatic and positive impacts on other components of the grassland community.

“R. minor increased the abundance of all sorts of animals including snails, woodlice, butterflies, wasps and spiders. This is an important finding for the conservation and management of these chalk grassland communities, which are exceptionally species rich but also rare and threatened.”

Co-researcher Dr Libby John, Head of the School of Life Sciences at the University of Lincoln said: “Overall, our findings demonstrate that parasitic plants can have dramatic and lasting impacts on abundance, richness and diversity across multiple trophic levels within semi-natural grassland communities. Our study provides a clear demonstration of the importance of indirect interactions as major structuring forces in ecology and the strong cascading effects of these interactions across trophic levels. Our results also illustrate that keystone species such as R. minor can have both negative and positive impacts on other species.”

Understanding the impact of species on community structure is a fundamental question in ecology and there is a growing body of evidence that suggests that both sub-dominant species and parasites can have disproportionately large effects on other organisms.

Plots with natural and enhanced densities of R. minor had lower plant biomass than plots without the hemiparasite, but in enhanced densities the number of invertebrates was almost doubled, with effects evident in herbivores, predators and detritivores - emphasising its role in grassland communities.

The results demonstrated that the manipulation of a single sub-dominant plant species causes substantial changes in the abundance and diversity of organisms across four trophic levels.

The changes induced in the plant community were consistent with previous studies of the impact of R. minor, particularly in the suppression of grasses. However, the striking enhancement of invertebrate abundance across several trophic levels has not been recorded previously.