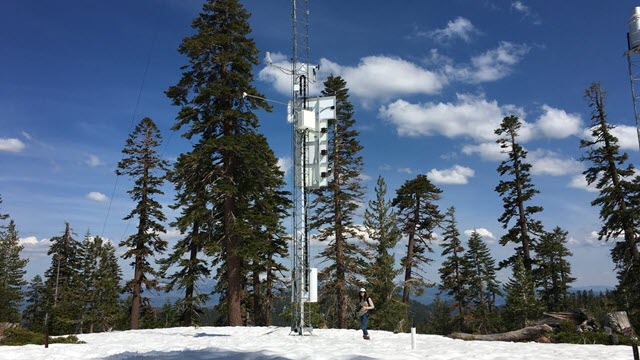 Winter snows are accumulating in the Sierra Nevada Mountains, creating the snowpacks that serve as a primary source of water for the western U.S.

However, due to rising average temperatures, snowpacks in the Great Basin appear to be transitioning from seasonal, with a predictable amount and melt rate, to "ephemeral," or short-lived, which are less predictable and only last up to 60 days. Unfortunately, ephemeral snow, and the reasons for and impacts of this transition have been poorly tracked and understood. Recent research and two published papers by a former University of Nevada, Reno graduate student and her professors are shedding some light on the subject.

"Small temperature changes can lead to large ecological changes," explained Hydrology Graduate Student Rose Petersky. "More intermittent snowpacks means water flow is more difficult to predict. We might not get as much water into the ground, throwing off the timing of water for plant root systems, reducing our supply and use, and even affecting businesses such as tourism."

Petersky, under the guidance of Natural Resources and Environmental Science Assistant Professor Adrian Harpold in the College of Agriculture, Biotechnology and Natural Resources, was the lead author in two recently published papers analyzing the change. One reports on the causes of the ephemeral snow, and the other reports on the impact of the transition on vegetation in the Great Basin. Natural Resources and Environmental Science Assistant Professor Kevin T. Shoemaker and Professor Peter J. Weisberg also worked on the project and are coauthors.

With funding through the Nevada Agricultural Experiment Station and from NASA, Petersky and the team analyzed both ground-based and satellite-based remote sensing data collected every day from 2001 to 2015. Petersky also wrote an algorithm, or computer formula, to fill in data lost due to cloud cover. To map changes, the team ran the data and algorithm through Google Earth Engine, computing many millions of computations in a few minutes.

With the resulting maps, they discovered that topography can play an important role, with more snow at higher elevations and on more north-facing slopes. In the Great Basin and eastern Sierra Nevada, shifts to more ephemeral snowpacks are due primarily to more rain falling instead of snow. They show that warming is likely to increase ephemeral snowpacks, even beyond the extreme 2015 drought. Consequently, the vegetation types at the greatest risk due to more ephemeral snowpacks were quaking aspen, red fir, Gambel oak and big mountain sagebrush, which represent ecosystems across the Great Basin.

"When it comes to managing natural resources, more information is better," said Harpold. "It will help us identify targets for intervention and work toward better managing the important water resource issues."

The team hopes others can use their results to identify species and areas most in need of management intervention in the form of forest thinning or assisted migration.

"Ultimately, this work will lead to more accurate models and reliable predictions for better water allocation and vegetation management in Nevada and beyond," Petersky concluded.