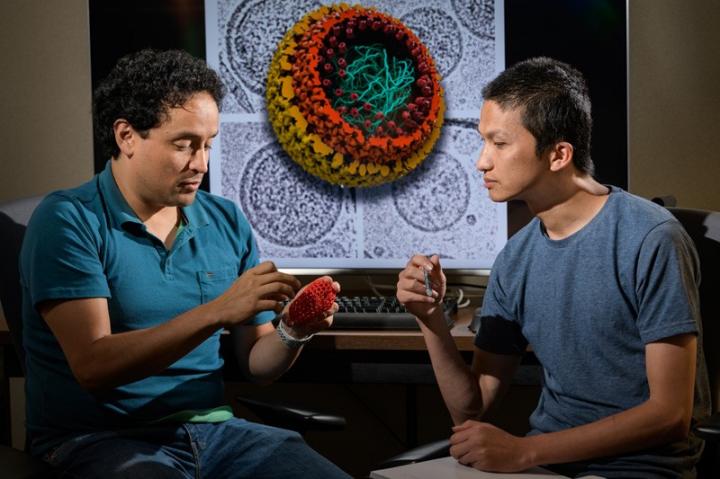 UD Professor Juan Perilla (left) and doctoral student Chaoyi Xu examine the structure of the HIV virus, using both a physical and a computer-generated modelEvan Krape

Research by a multi-institutional team, including two members from the University of Delaware, has revealed new details about the HIV virus capsid structure and how it develops.

A capsid is a protein shell that encloses a virus's genetic blueprint.

The study, led by Cornell University scientists, was published Aug. 1 in the journal Nature and focused on the role of a naturally occurring, small molecule called IP6. The researchers found that IP6 plays an important part in both the immature and mature phases of the HIV life cycle as the virus assembles its structure.

"This small molecule acts in two different assembly steps in the pathway," said Robert Dick, a postdoctoral researcher at Cornell and the first author of the paper. "A cell can make millions of virus particles, but if they don't go through the maturation process, they are not infectious."

The discovery of the key role played by IP6 "opens a door for development of new treatments" that would target that molecule, said Juan R. Perilla, assistant professor of chemistry and biochemistry at the UD.

Perilla and UD doctoral student Chaoyi Xu, who are co-authors of the paper, conducted computational and analytical work for the research project, using supercomputers to model the capsid of the HIV virus and the role of IP6 in its assembly.

"Many experimental techniques are just a snapshot," Perilla said. "With the computational microscope [the use of laboratory data in combination with supercomputers], you can actually see how things move."

Perilla and Xu ran their simulations through the Extreme Science and Engineering Environment (XSEDE) project funded by the National Science Foundation, which allocates supercomputer resources to specific research problems. The computers they used were housed at the Pittsburgh Supercomputing Center and the Texas Advanced Computing Center.

Perilla's research team at UD has done similar types of simulations and analysis on other aspects of HIV and on the hepatitis B virus. The researchers have also investigated other retroviruses, in addition to HIV, including equine and poultry viruses.

"Just as we found that HIV uses IP6 to develop and become infectious, we want to learn how retroviruses in general 'learned' to use these kinds of molecules," Perilla said. "Viruses always evolve, but this particular mechanism is especially important.

"When did it evolve? It's a question we haven't answered yet."

Researchers have now shown how to generate and characterize an entirely new type of light, synthetic chiral light, which...

Sygnature’s Computational Chemistry department have spent the past year looking at how augmented reality can be applied...