Record drought and heat have some farmers worried about where and when crops can be grown in the future, even in California where unprecedented microclimate diversity creates ideal growing conditions for many of the most popular items in America's grocery stores. A third of the vegetables and two-thirds of fruits and nuts consumed by Americans are now grown on more than 76,000 farms across the state, yet 20 years from now certain California regions may simply become too hot and dry for continued production.

New research from Lawrence Berkeley National Laboratory (Berkeley Lab) shows that by the years 2045-2049 future temperatures will have more of an effect on when cool-season crops, such as broccoli and lettuce, can be grown than on where, while for warm-season crops (cantaloupe, tomatoes, carrots) the impact will be greater for where they can be grown versus when. The scientists describe pairing computer modeling with information about historic and ideal growing temperatures for five important California crops in their paper, "Projected temperature increases may require shifts in the growing season of cool-season crops and the growing locations of warm-season crops," which appeared in the journal Science of the Total Environment earlier this month.

"To ensure food security for California and the rest of the country, it's important to predict how future warming will affect California agriculture," said the paper's lead author Alison Marklein. "We need reliable information about how future climate conditions will impact our crops in order for the agricultural system to develop an adequate response to ensure food security. For instance, one major challenge when considering relocating crops is that growers have specialized knowledge of their land and crops. If crops can no longer be grown in their current locations, then the farmer has to either move to a new area or grow a different crop, which presents a practical and economic burden on the farmer."

Now a scientist at University of California (UC) Riverside, Marklein had previously led the project while completing a postdoctoral fellowship at Berkeley Lab and collaborating with Peter Nico, a study co-author and staff scientist in Berkeley Lab's Earth and Environmental Sciences Area. Scientists from the US Department of Agriculture and UC Davis also contributed. Funded by the University of California's Global Food Initiative, the research represents a significant research focus for Berkeley Lab: sustainable agriculture. Another current Berkeley Lab study applies machine learning to developing microbial amendments that could replenish soils depleted of nutrients like carbon and phosphorus. 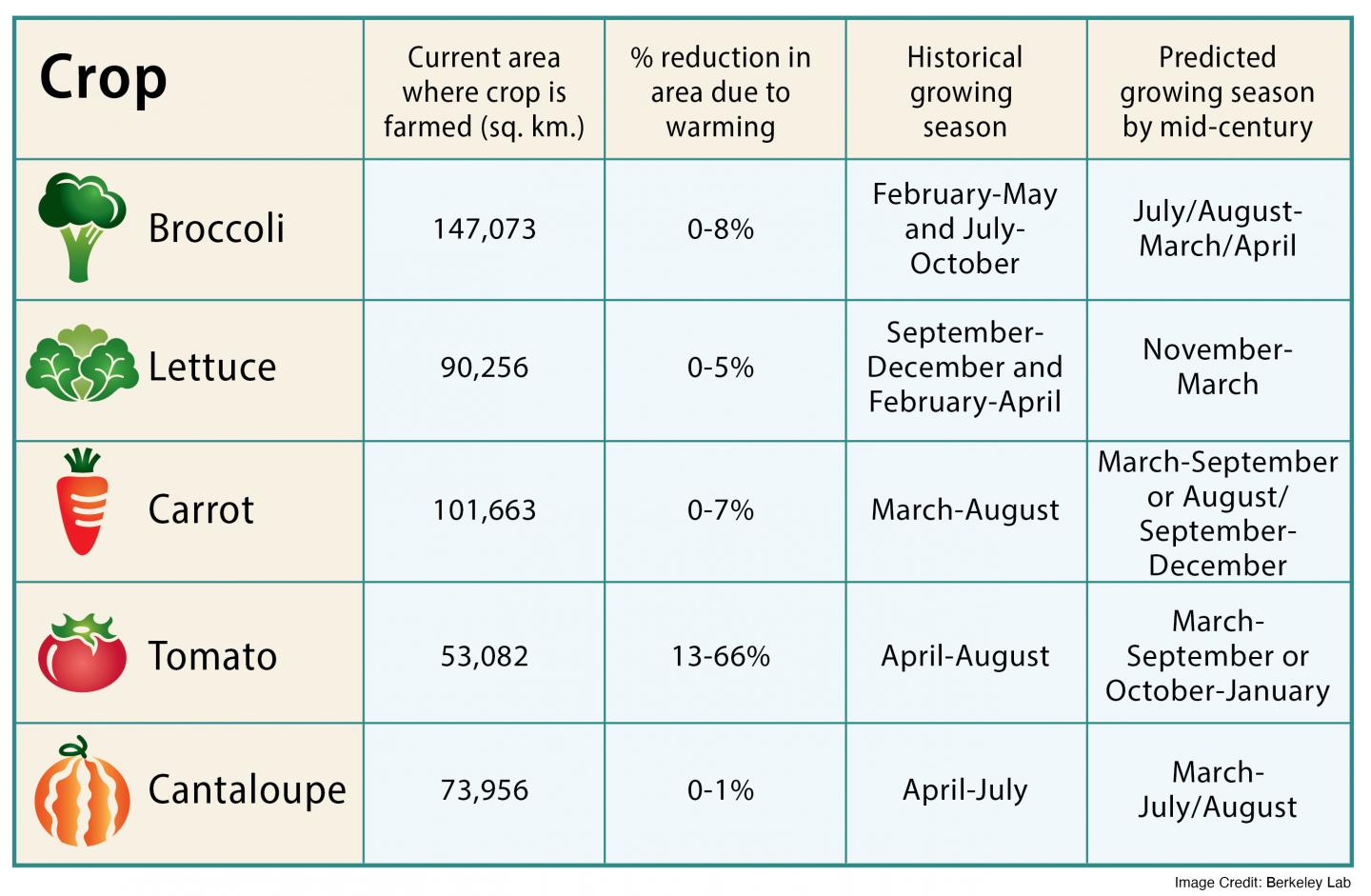 Researchers compared how future warming will impact where and when five California crops can be grown.
Berkeley Lab

In carrying out the study, the researchers first selected five annual crops that are produced more in California than any other state—lettuce, broccoli, carrots, tomatoes, and cantaloupe. These nutrient-dense crops contributed 64 percent of the state's cash value of vegetable and melon crops in 2016 and are essential to food security, as evidenced by their place among the top vegetables and fruits donated to four studied California food banks.

The team then obtained 15 years of air temperature data beginning in 1990 from locations across the state, as well as information about crop temperature thresholds—or maximum and minimum air temperatures beyond which crop failure occurs—and growing locations for each of the five crops going back seven years. They also considered a crop's optimal growing-season length: for example, broccoli requires four consecutive months of minimum 39 degrees Fahrenheit and maximum 95 degrees.

Setting out to compare how each crop would do across California under different possible climate scenarios, one hot-dry and another cool-wet, the researchers looked at how higher temperatures may affect the crops in their historical growing locations. Next, they identified possibilities to expand any crop to a more ideal growing location based on that crop's temperature threshold, looking at all areas where that crop has not been grown, even where land had not previously been used for agriculture.

Finally, the team calculated how much of the land historically used for growing each of the five crops can be maintained under future warming scenarios (hot-dry, cool-wet); how much of the land used would be untenable due to temperature rise; and how much land not formerly used for agriculture could potentially support each of the five crops in comparison to historical agricultural land where these crops have not yet been grown.

Tomatoes could face some growing pains

"We found differences in how warmer temperatures will affect the cool-season crops versus the warm-season crops," Marklein said. "For cool-season crops like broccoli and lettuce, it may be possible to extend their growing seasons. But it may become too warm to grow warm-season tomatoes where they have been historically farmed in summer, and may require moving them to milder climates warm enough for growing tomatoes under the new climate scenarios."

The team found that both cool-season crops, broccoli and lettuce, are currently grown nearer to their lower temperature thresholds during fall and spring. The climate models predict an increase in winter temperatures above the minimum temperature threshold for both crops, suggesting that by mid-century these crops could also be grown into winter, even in areas where they have not historically been grown.

The warmer temperatures in fall and spring suggest that tomatoes might benefit from a shift in growing season. But that could prove harder than it appears.

Opportunities could crop up all over

While it's true that some of the crops studied, tomatoes especially, will lose areas where they have been traditionally farmed due to future warming, there could be some ways to mitigate these potential challenges. For example, because their analysis focused on air temperature rather than crop temperature, in practice irrigation may be able to reduce some negative heat effects.

In total, Marklein said this study gives agricultural planners a lot to think about. "This is really a first step in planning for future climate scenarios. This work could be used to help prioritize resources like cropland and water to maximize agricultural productivity and food security," she said. "It's critical to plan ahead for future warming scenarios, particularly in areas like California that feed the nation."