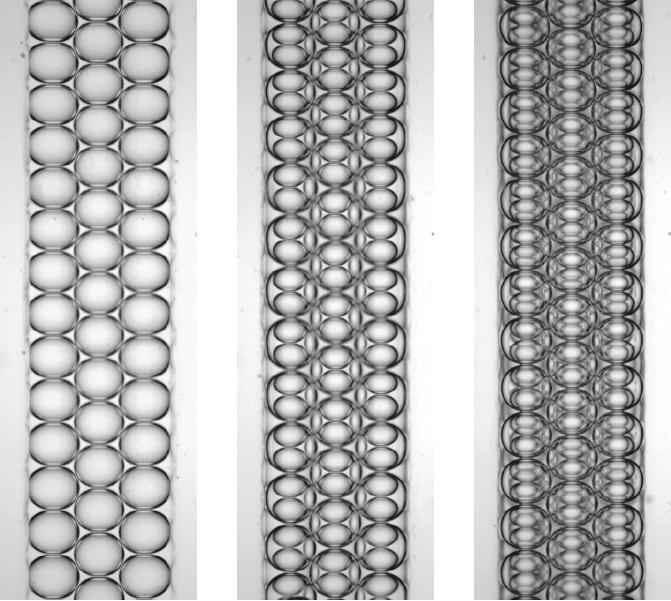 One, two and three layers of self-assembled droplets in 3D microchannelsSUTD

Self-assembly is the process by which simple building blocks interact and organize themselves into ordered structures. Nature abounds with fascinating examples of self-assembled structures. Inspired by nature, researchers have long sought to exploit self-assembly as a "bottom-up" fabrication technique to engineer complex materials and devices. Currently, the self-assembly of ordered emulsions has elicited much interest for its potential application in multiple fields such as material synthesis and high throughput analysis.

In contrast to previous studies which used microchannels with no variations in height, the researchers at SUTD used a microchannel with a gradual increase in height. In such 3D microchannels, the droplets, unconfined by the top or bottom walls and driven by a density difference with the surrounding liquid, either sink to the bottom of the microchannel or float to the top of microchannel. They then accumulate, jam and self-assemble into ordered structures. The research team demonstrated that self-assembly into 2D lattices could be achieved when droplets occupied just 5% of the total volume of liquid injected into the microchannel; and by gradually increasing the droplet concentration beyond that, self-assembly into 3D lattices could be achieved. To further demonstrate the potential of their discovery the researchers used self-assembled 2D lattices of droplets as a template to fabricate millimeter wide hydrogel fibers with anisotropic pore structures.

"The simplicity and versatility of the concept--the use of 3D microfluidics for the controlled self-assembly of droplets--should be of interest to researchers exploring the interface between microfluidics, self-assembly, and soft matter" said Dr. Pravien Parthiban, a postdoctoral fellow at SUTD and the lead author involved in the work.