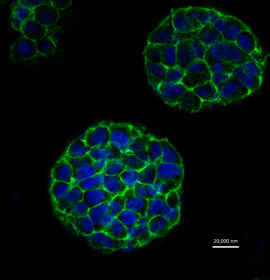 After eight days, the printed mixture of cervical cancer cells and hydrogel grows into living spheroid tumors—shown here in fluorescent dye.Drexel UniversityDrexel’s Wei Sun, PhD, Albert Soffa chair professor in the College of Engineering, has devised a method for 3D printing tumors that could soon be taking cancer research out of the petri dish.

Using a mixture of cervical cancer cells and a hydrogel substance that resembles an ointment balm, Sun can print out a tumor model that can be used for studying their growth and response to treatment. This living model will give cancer researchers a better look at how tumors behave and a more accurate measure of how they respond to treatment.

“This is the first time to report that one can build a 3D in vitro tumor model through 3D Printing technology,” said Sun, the director of Drexel’s research center at the Shanghai Advanced Research Institute. “This may lead to a new paradigm for cancer research and for individual cancer therapies. We have developed a technological platform and would like to work with biologists and pathologists to encourage them to use the developed platform for 3D biology and disease studies.”

While researchers have been able to make cell models and tissues using rapid prototyping methods for some time, Sun’s lab, is the first to produce a living 3D tumor model through additive manufacturing –also known as 3D printing. In a study published in the journal Biofabrication in April, Sun reports a procedure his team developed for growing research-grade models of cervical cancer tumors.

Cancer researchers are aware that working with two-dimensional samples comes with inherent limitations. For example, tumors in the body have a much different surface area, shape and cellular composition than samples grown in a lab, thus data from tests of cancer treatments will differ from the reaction of an actual tumor to the drugs. But until now, these in vitro cell cultures were their best option.

“Two-dimensional cell culture models are traditionally used for biology study and drug screening,” Sun said. “However, two-dimensional culture models can not represent true 3D physiological tissues so it lacks the microenvironment characteristics of natural 3D tissues in vivo. This inherent inadequacy leads to shortcomings in cancer research and anti-tumor drug development. On the other hand, 3D tumor models can represent true tumor 3D pathological organizations and will lead to a new paradigm for cancer study.”

As part of the National Science Foundation-funded study, Sun tested his tumor model against a two-dimensional culture sample using a common anti-cancer drug. Sun’s 3D printed tumors showed more resistance to chemical treatment than the same cancer cells grown in a petri dish –an illustration of the disparity that exists between test results and success rates of cancer treatments.

Sun, who is a mechanical engineering researcher with a focus on biomodeling, designed and patented a special 3D printer in 2002 so his lab, the Drexel Biofabrication Laboratory, could make tissue samples and bone scaffolds as part of their research. As his work progressed, it became apparent that the next step was to figure out a way to print living 3D models of tissues and organs.

With a significant background in the extrusion, or additive, modeling process, Sun and his team were able to control for the main variables: diameter of nozzle, speed and pressure of extrusion, pattern and size of deposition, and viscosity and temperature of substrate materials.

For the undertaking, Sun’s team, composed of researchers at Drexel University, Tsinghua University in Beijing, China, and Drexel-Shanghai Advanced Research Center in Shanghai, China, used a multi-nozzle printer to extrude a gelatinous mixture of hydrogels and living cervical cancer cells. The result was a cellular deposition in which 90 percent of the cancer cells survived the process and within eight days had grown into spheroid-shaped tumors.

“The keys to keeping the cells alive were controlling the temperature of the nozzle and using a hearty strain of cancer cells,” Sun said. “We chose the Hela cell, which is a robust form of cervical cancer that has been used in research for many years. Because of this, we had a good idea as to how it would behave under certain conditions. This allowed us to control the variables of the extrusion process until we were able to successfully create a model.”

Sun’s team plans to continue its research in hopes of creating tumors that are even more similar to those that grow in the body. They will work to print tumors composed of multiple different cells –a trait often found in those removed from cancer patients. In addition, the group is working on ways to attach the models to tissues and vasculature that they’ve printed, which would recreate the way tumors grow in their bodily habitat.

“We will try to understand the cell-cell and cell-substrate communication and immune responses for the printed tumor-like models,” Sun said. “Our goal is to take this tumor-like model and make it into a more of an in vivo simulation. And to apply it to study the development, invasion and metastasis of cancer, to test the efficacy and safety of new cancer drugs, as well as the specific therapy for individual cancer patient”