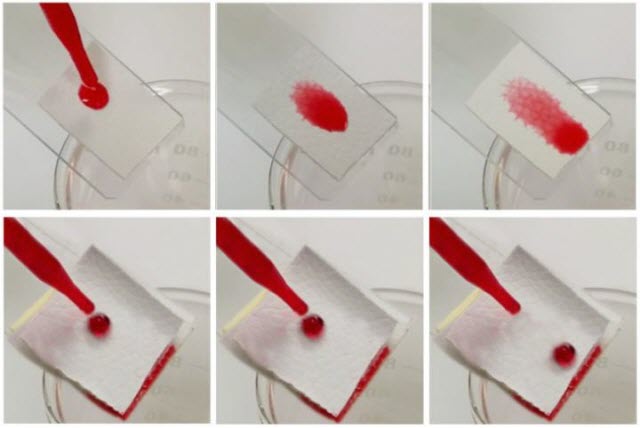 COLUMBUS, Ohio — If you've ever stained your favorite leather-look jacket or had to peel your bare legs from a sticky vinyl car seat in the summer, the solution to your woes just might be found on the surface of a lotus leaf.

Researchers at The Ohio State University have previously used a nano-engineered texture based on the fuzzy leaves to devise self-cleaning glass and a mesh that separates oil from water.

Now, in the journal Colloids and Surfaces A, they report that they found a way to adapt the same nature-inspired coating to plastic-based synthetic leather. Both water and oil roll off the coating, which keeps the leather-like surface from getting sticky up to temperatures of 70 degrees Celsius (158 degrees Fahrenheit).

"Genuine leather has been an important material since the beginning of human history," Bhushan said. "Today, the market for synthetic leather is growing because it's less expensive and easier to work with. To our knowledge, this is the first time anyone has managed to fabricate synthetic leather that is not just water resistant, but super-liquiphobic—it repels both water and oil-based liquids."

Synthetic leather is made from fabric coated with plastic, usually polyurethane (PU) or polyvinyl chloride (PVC). Both PVC and PU can be molded into flat sheets with grooves that give it a leather-like texture. Like genuine leather, synthetic leather is somewhat permeable to liquids. Unlike genuine leather, it gets sticky at high temperatures because heat softens the plastic surface.

Bhushan specializes in biomimetics, the science of creating materials and processes that mimic nature. Much of his work has been inspired by lotus leaves, whose bumpy surfaces naturally repel water.

As in their previous experiments creating water- and oil-repellant surfaces, the researchers tried to create a bumpy texture by spraying a coating of silica nano-particles on the surface of the synthetic leather.

But Bhushan and doctoral student Dev Gurera quickly discovered that the plasticizers in the synthetic leather—that is, the chemicals that give plastic its plasticity--prevented the nano-particles from sticking, especially inside the leather-look grooves. So they cleaned the surface with an ultraviolet light treatment commonly used in computer chip manufacturing.

The result: The nano-particles stuck to the cleaned synthetic leather, creating a bumpy surface. Then the researchers sealed the nano-particles with a silicone resin. The coating was mostly transparent, so the leather-like texture was still visible.

Bhushan and Gurera coated samples of PU and PVC and tested them for water and oil repellency and self-cleaning properties, as well as durability and heat resistance. 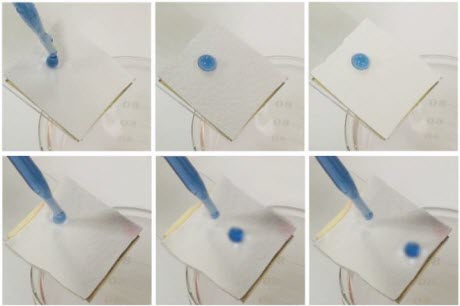 To see how wear affected the coating, the researchers scratched a groove into the surface by dragging a small sapphire bead back and forth over it 100 times. The tilt angle required to get droplets to roll off the scratched surface increased to 7 degrees—still super-liquiphobic—but only when the droplet rolled across (that is, perpendicular to the direction of) the worn-in groove.

When the leather was placed so that the droplet would have to roll inside the worn groove, the required angle for the droplet to roll off increased to 44 degrees. That sounds pretty bad, but it's still better than the untreated PU and PVC surfaces, which remained coated with water or oil even when they were tilted to 90 degrees.

To test self-cleaning, the researchers sprayed black silicon carbide powder on the leather and measured how much of the powder could be washed away by a single water droplet. On untreated synthetic leather, the water washed away about 10 percent of the powder, while on the treated leather, 90 percent of it was washed away.

And the stickiness? The hottest temperature reported inside a closed car sitting in the sunlight is around 80 degrees Celsius (176 degrees Fahrenheit). At that temperature, the researchers said, the coating can't maintain its integrity, because the PU or PVC beneath it begins to flow like an extremely viscous fluid. The coating did remain un-sticky up to 70 degrees Celsius (158 degrees Fahrenheit), so it could keep your legs from sticking to a car seat on most hot days.

It won't prevent a very hot seat from burning you, however—so watch out. At least your favorite "leather" jacket will look and feel the same.