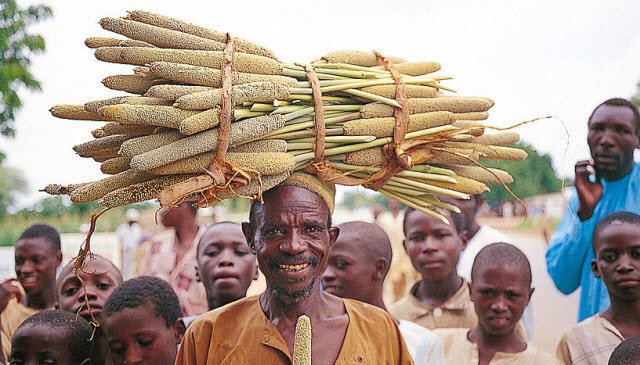 An international consortium under the lead of the non-profit organization International Crops Research Institute for the Semi-Arid Tropics (ICRISAT) and including the participation of a research team led by the system biologist Wolfram Weckwerth has published the genome sequence of Pearl millet, a drought resistant crop plant most important in arid regions in Africa and Asia. This so-called C4 plant is especially important to small and medium farmers who grow the plant without larger irrigation. Peal millet delivers a good harvest index under drought and heat conditions when rice, maize, or wheat no longer produce any grains.

Plant diversity and adaptation to different climatic conditions—especially important in the era of global climate change—is synonymous for the concept of natural and genetic diversity. Research tackling this natural genetic variation and the corresponding biodiversity provides one of the largest treasures of mankind. This exact genetic variation of plant families, plant genera, and even within one plant species is the key to cope with global climate change and dramatic consequences for agriculture. For the purpose of sustainable research, breeding and protecting genetic diversity, especially of crop plants, many public non-profit research organizations have formed under the umbrella of CGIAR and are active in research and building non-profit biobanks. ICRISAT is the Indian pendant of the famous CIMMYT which started in the 60s to distribute disease resistant wheat varieties to poor farmers in developing countries.

Pearl millet (Cenchrus americanus 72 (L.) Morrone synonymous for Pennisetum glaucum) is a staple food plant in arid and semi-arid regions of Africa, India, and Asia. This so-called C4 plant shows high resistance to drought stress but the molecular mechanisms behind this are unknown. "The first steps to elucidate molecular mechanisms in any organism from plants to animals to microbes is to sequence and analyze their genome, proteome, and metabolome," says Weckwerth, head of the Department of Ecogenomics and Systems Biology and Chair of the Vienna Metabolomics Center of the University of Vienna. An international consortium (http://ceg.icrisat.org/ipmgsc/) with participation of the University of Vienna has now sequenced the genome of pearl millet as well as 994 further breeding lines and wildtypes to reveal molecular properties hinting at drought resistance mechanisms on a genome basis. "Furthermore, this study provides the basis for marker-selected breeding studies," says the coordinator of the genome project, Rajeev Varshney.

In a related study, Arindam Ghatak, Palak Chaturvedi, Weckwerth, and other team members investigated the drought resistance of pearl millet with respect to metabolism and proteome changes. From these studies, the first molecular-physiological hypotheses were derived as to how the plant can adapt to water deficiency and heat and at the same time keep a reasonable harvest index. The initial genomic information of pearl millet was essential for these studies.