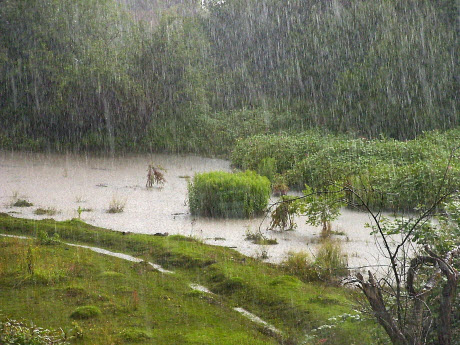 Rain doesn't simply cleanse the air of particles but also spurs organic material to go from the soil into the air.Photo courtesy of Wikimedia CommonsRICHLAND, Wash. – Most of us think of that sweet smell after a storm as the aftereffect of rain that has rinsed the air of pollutants and dust. But it turns out that rain also triggers the release of a mist of particles from wet soils into the air, a finding with consequences of its own for how scientists model our planet's climate and future.

The evidence comes in the form of tiny glassy spheres, less than one-hundredth the width of a human hair, discovered at the Great Plains of Oklahoma after a rainstorm and put under scrutiny by scientists at several U.S. Department of Energy facilities. The study appears May 2 in Nature Geoscience.

According to the authors, scientists have largely assumed that organic particles from the soil enter the air through erosion by wind or through agricultural work. The effects of rain splash haven't been part of the discussion.

But the team's field observations indicate that up to 60 percent of particles that are airborne after a rainstorm in certain areas, such as grasslands and tilled fields, come from the soil. These organic particles are carbon-based and come from decaying vegetation and organisms. The tiny bits of organic matter can hold tremendous sway over our climate, playing a role in the fate of sunlight as it hits Earth.

Authors of the study are from two DOE Office of Science user facilities—EMSL, the Environmental Molecular Sciences Laboratory at the Pacific Northwest National Laboratory, and the Advanced Light Source at Lawrence Berkeley National Laboratory—as well as the Berkeley Lab and the University of Massachusetts at Amherst.

Chemist Alexander Laskin led the team at PNNL and chemical scientist Mary Gilles led the group at the Berkeley Lab.

Captured, freed from the soil by raindrops

It's not simply that raindrops hit the ground and dislodge some dirt which flies into the air. Rather, as the rain falls, organic matter in the soil dissolves in puddles that form. As more rain falls, the splashing creates air bubbles which mix with the dissolved matter of the soil. The bubbles float upward and quickly burst, releasing into the air a mist of the soil organic compounds.

In the air, the droplets in the mist dry and their contents become solid glassy organic particles. These tiny spheres—made mostly of carbon, oxygen, and nitrogen—are about half a micron wide and disperse through the air, sometimes depositing on the ground almost immediately but usually staying aloft for days or weeks, oftentimes traveling thousands of miles.

Such was the case March 27, 2014, in Lamont, Okla., a day after a strong rainstorm swept through the region. As part of an exploratory study, researchers with the Gilles team gathered samples of airborne particles at DOE's Atmospheric Radiation Measurement Climate Research Facility. Under the microscope, scientists quickly determined there was something special about the air sample: It was full of tiny, spherical, glassy particles.

They were so out of place that when Gilles first examined the particles under the microscope, she scribbled in her lab notebook, "Something is wrong with these samples."

The same was true of particles the team gathered after two other rainstorms in Lamont as well as those emitted from a garden in Richland, Wash., after it was watered by sprinkler.

"The idea of rain producing aerosols, much less solid ones, just hasn't been on anyone's radar," said Gilles. "Rain cleans the atmosphere; it hadn't occurred to me to think of rain as a mechanism to produce solid particles from soil."

The particles, sometimes called "brown carbon," have the potential to absorb sunlight, perhaps heating the planet. And the particles can serve as nuclei controlling processes related to cloud formation, creating more clouds or making existing clouds brighter—actions which would cause sunlight to be reflected.

Finding a new source of the airborne particles, known as aerosols, is important for scientists seeking to understand the planet's climate.

"This is a new mechanism for bringing carbon from the soil into the air. These particles have a unique set of physical and chemical properties and they may have a substantial effect on the Earth's climate," said Laskin, who led the study.

The research meshes nicely with work published last year by a team from the Massachusetts Institute of Technology that demonstrated in the laboratory that raindrops could release fine particles from water accumulated on mineral surfaces into the air. The new work by PNNL and LBNL scientists showcases a real-world example of this phenomenon and explores the implications for Earth's climate.

The team plans to study soil organic particles from different locations to better understand their environmental impact. Those findings will be integrated into an atmospheric model that will assess the implications of the findings on local and regional climate scales.

To do the study, scientists took advantage of the science capabilities at three DOE user facilities: EMSL at PNNL, the Advanced Light Source at Lawrence Berkeley National Laboratory, and the Atmospheric Radiation Measurement Climate Research Facility, where the soil organic particles were first recognized. Researchers also relied on data and analyses at the Canadian Light Source and the U.S. National Oceanic and Atmospheric Administration.

The study was funded by DOE's Office of Science and by PNNL.