Fifty years ago, Monty Python's famous sketch, "The Ministry of Silly Walks," first aired on BBC One. The sketch pokes fun at the inefficiency of government bureaucracy. It opens with the Minister (John Cleese) walking in a rather unusual manner to his work, the Ministry of Silly Walks, where Mr. Pudey (Michael Palin) is waiting to meet with him to apply for a government grant to develop his silly walk. In the spirit of Monty Python's humor, based on an actual gait analysis, a Dartmouth research team finds that the Minister's silly walk is 6.7 times more variable than a normal walk. The findings are published in Gait & Posture.

Although Mr. Pudey's walk was found to be only 3.3 times more variable than a normal walk, the research team agreed with the Minister's decision that he had a promising silly walk that was deserving of a Research Fellowship. 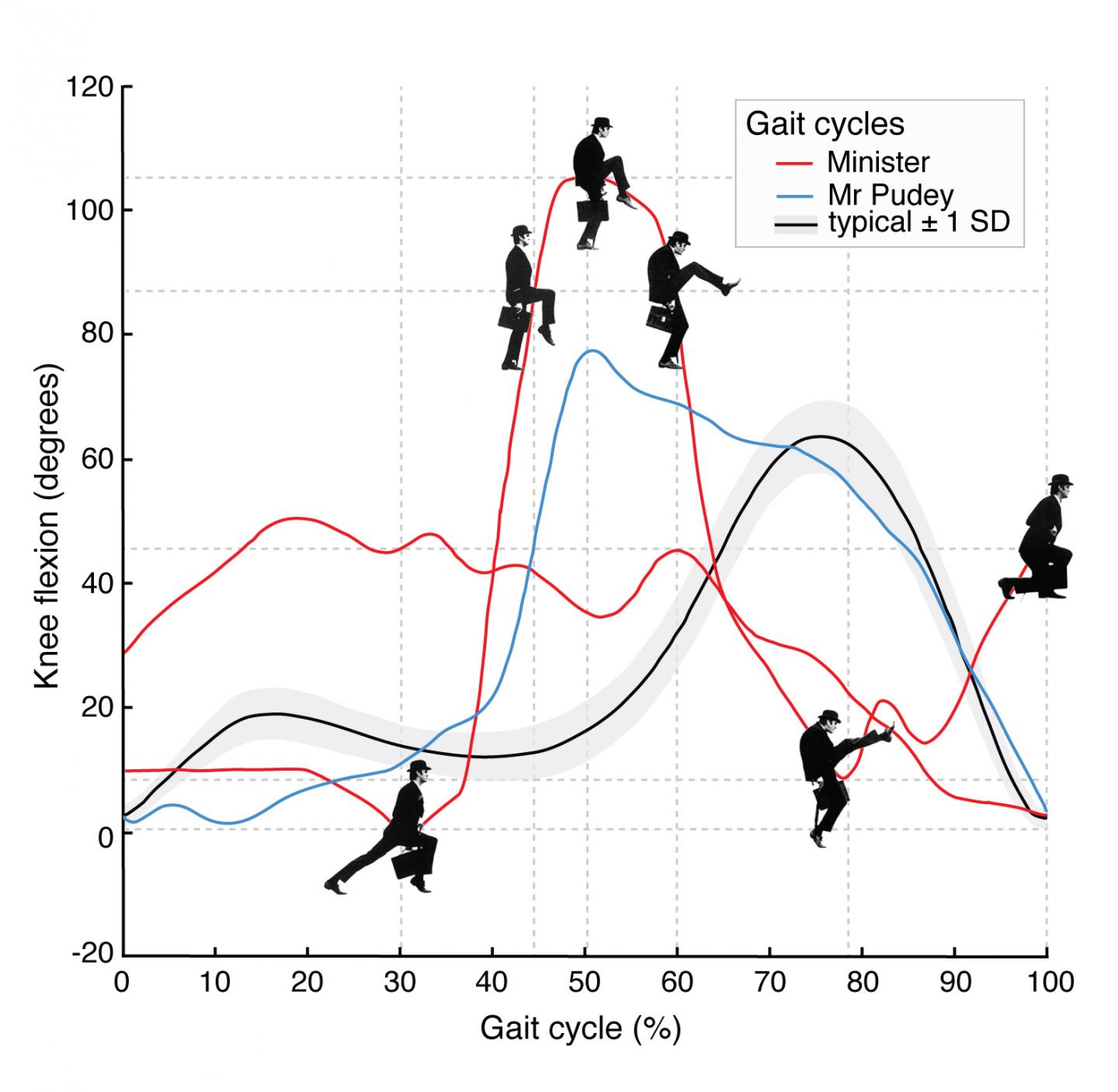 Monty Python's 'Ministry of Silly Walks': Comparison of two complete gait cycles of the Minister, one of Mr. Pudey and the mean curve for people without pathology. (Data source: Motion & Gait Analysis Laboratory, Lucile Packard Children's Hospital at Stanford). Left knee flexion in the sagittal plan of motion normalized to a single gait cycle. (Two gait cycles of the Minister are from the televised sketch, which premiered Sept. 15, 1970 and the live stage performance in Los Angeles, Calif, in Sept. 1980 [video source: the 1982 concert film Monty Python Live at the Hollywood Bowl]. Gait cycle of Mr. Pudey is from the original sketch).
Chart created by Erin E. Butler and Nathaniel J. Dominy

The team points out how bureaucratic inefficiency can be likened to that of the peer-review process associated with academic research in the health sciences, particularly when applying for funding. Applying for a federal grant is extremely time consuming and can take months to prepare. An application may require a 150-page proposal followed by a review by a panel of researchers, who are often flown in for the occasion. Peer review protocols often require that the panelists must reach a consensus of 75 percent or more to approve a proposal.

By contrast, the Dartmouth team points out how the National Health and Medical Research Council of Australia pioneered a streamlined grant application process in 2013, which resulted in an estimated savings in 2015 of $A2.1-$4.9 million per year.

"The peer review research process has become rather unwieldy," said Nathaniel J. Dominy, the Charles Hansen Professor of Anthropology, who co-authored the study with Erin E. Butler, who was a postdoctoral fellow at the Neukom Institute at Dartmouth at the time the research was conducted. "If the process was streamlined and grants were awarded more quickly, researchers could start their work earlier, accelerating the timeline for research. Similarly, grant administrators would recoup time and money, which could potentially free up more money for research funding," explained Dominy.