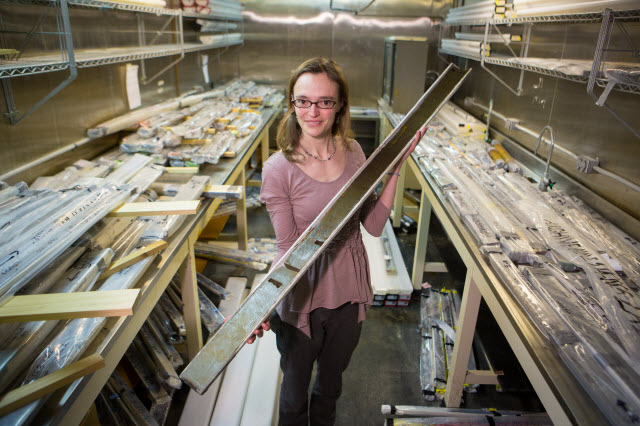 UB researcher Elizabeth Thomas holds half of a sediment core collected from the lake in western Greenland where the study was sited. Such sediment cores contain aquatic leaf waxes that reveal information about the history of precipitation at a site.Photo Credit: Douglas Levere

BUFFALO, N.Y. — The history of Greenland’s snowfall is chronicled in an unlikely place: the remains of aquatic plants that died long ago, collecting at the bottom of lakes in horizontal layers that document the passing years.

Using this ancient record, scientists are attempting to reconstruct how Arctic precipitation fluctuated over the past several millennia, potentially influencing the size of the Greenland Ice Sheet as the Earth warmed and cooled. 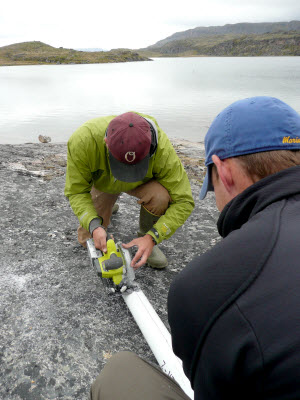 While more research needs to be done to draw conclusions about ancient precipitation patterns across Greenland, the new results are consistent with the hypothesis that global warming could drive increasing Arctic snowfall—a trend that would slow the shrinkage of the Greenland Ice Sheet and, ultimately, affect the pace at which sea levels rise.

“As the Arctic gets warmer, there is a vigorous scientific debate about how stable the Greenland Ice Sheet will be. How quickly will it lose mass?” says lead researcher Elizabeth Thomas, PhD, an assistant professor of geology in the University at Buffalo College of Arts and Sciences who completed much of the study as a postdoctoral fellow at the University of Massachusetts Amherst.

“Climate models and observations suggest that as temperatures rise, snowfall over Greenland could increase as sea ice melts and larger areas of the ocean are exposed for evaporation. This would slow the decline of the ice sheet, because snow would add to its mass,” Thomas says. “Our findings are consistent with this hypothesis. We see evidence that the ratio of snow to rain was unusually high from 6,000 to 4,000 years ago, which is what you would expect to see if sea ice loss causes snowfall to increase in the region.”

The research was published on May 23 in Geophysical Research Letters, a journal of the American Geophysical Union.

Aquatic plant leaf waxes as a record of snowfall

Thomas’ research looks to understand how precipitation changed in the past, with an eye toward better predicting how modern warming will affect the Earth.

“We are using the past to see what might happen in the future,” she says.

To understand how aquatic leaf waxes function as a historical record, you need to know a little about aquatic plants. In the Arctic, these organisms survive on lake water, and use hydrogen atoms from this water to produce wax coatings on leaves. 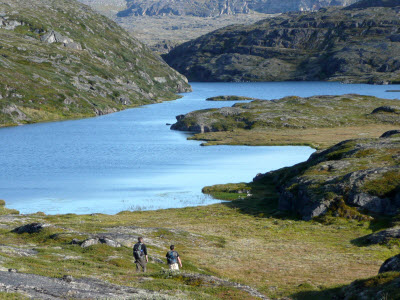 A new study uses aquatic leaf waxes to study the history of precipitation at this lake in Western Greenland.Photo Credit: Jason BrinerThese hydrogen atoms are the key to studying precipitation: In years when the ratio of summer rain to winter snow in a region is high, lake water and aquatic leaf waxes end up containing high levels of a rare form of hydrogen called deuterium, which is heavier than “normal” hydrogen. (This is because summer rain holds more deuterium than winter snowfall.)

This is what Thomas and her colleagues saw when they extracted a long, cylindrical sediment sample from a lake bottom in western Greenland. The mud contains ancient leaf waxes, with the oldest at the base of the column and the youngest at the top.

By dating and analyzing thin slices of the sample, the team determined that aquatic leaf waxes had low levels of deuterium from 6,000 to 4,000 years ago.

This is exactly what researchers would expect to see if the warm temperatures of that time had fueled sea ice loss, leading to increased Arctic snowfall and a decline in deuterium in lakes, Thomas said. She acknowledged that it’s possible that a drop in summer rainfall accounted for the changes in deuterium, but says a rise in winter snowfall is the more likely explanation, as scientists have found independent evidence that the region was wetter 6,000 to 4,000 years ago.

The research team included UB associate professor of geology Jason Briner; undergraduate student John J. Ryan-Henry from Brown University, the University of Rhode Island, and the Roger Williams University School of Law; and Professor Yongsong Huang from Brown University and the Chinese Academy of Sciences. The study was funded by the National Science Foundation and research grants from the Geological Society of America.