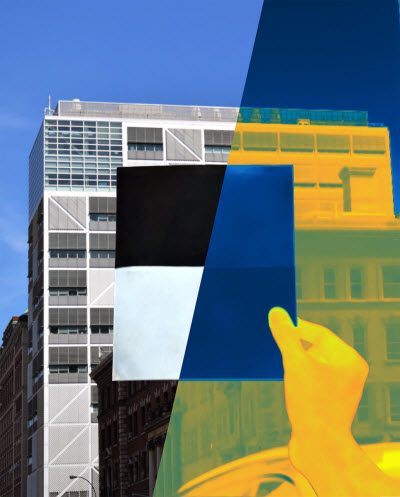 The selective solar absorber (SSA) developed by the researchers appears black, and thus absorptive, under sunlight (as shown on the photograph on the left). However, for thermal radiation, it behaves like a non-emissive metal mirror (reflecting the dark blue sky, as shown on the thermograph on the right), and prevents the absorbed solar energy from being radiated away and lost.Figure courtesy of Jyotirmoy Mandal and Yuan Yang/Columbia EngineeringNew York, NY—August 28, 2017 — Researchers led by Yuan Yang, assistant professor of materials science and engineering at Columbia Engineering, along with colleagues at the Department of Chemistry at Columbia University, and Stanford University have developed a new, scalable, and low-cost “dip and dry” method for fabricating a highly efficient selective solar absorber (SSA) that can harness and convert sunlight to heat for use in a wide range of energy-related applications, from heating water and generating steam to residential heating.

The team’s method is outlined in a new paper, “Scalable, ‘Dip-and-dry’ Fabrication of a Wide-Angle Plasmonic Selective Absorber for High-efficiency Solar-thermal Energy Conversion,” published in Advanced Materials on Aug. 28.

The authors determined that the plasmonic-nanoparticle-coated foils created by their method perform as well or better than existing SSAs and maintain high efficiency throughout the day, regardless of the angle of the sun, due to the wide-angle design. They propose that the simple, inexpensive, and environmentally friendly process provides an appealing alternative to current SSA fabrication methods.

“We saw an unmet need for a facile, inexpensive, and sustainable method for fabricating high-performance SSAs,” said Yuan Yang. “We were pleased that our relatively simple process produced SSAs that performed on par with commercial SSAs and designs reported in other research. To our knowledge, this is the first time a plasmonic SSA has been made using such a process, and the scalability and cost of this approach brings us closer to making solar energy a practical reality for more people.”

Harvesting sunlight for renewable energy remains a primary objective for scientists. Solar-thermal converters, which can absorb light across the entire solar spectrum and convert it to heat at remarkably high efficiencies, offer a highly promising pathway for solar-energy harvesting. However, attaining high-efficiency solar-thermal conversion at low cost remains a challenge.

As a surface component of solar-thermal converters, SSAs are ideal because they have contrasting optical properties for solar and thermal radiation. They are very black across all colors of sunlight (from UV to visible to near infrared light) and can therefore absorb almost all the light and become very hot. However, unlike common black surfaces, they are metallic, i.e. non-emissive, when it comes to thermal radiation (mid- to far-infrared light). Heat is therefore not lost as radiation and can be used, for example, to heat water or generate steam.

Most SSAs are made using more sophisticated, energy-expensive, or hazardous manufacturing processes such as vacuum deposition or electroplating. This increases both the environmental footprint and cost while limiting their accessibility. As a basis for manufacturing SSAs, the dip-and-dry process is an attractive option, as it yields SSAs that are highly efficient, while bypassing the costs and environmental hazards associated with other approaches. 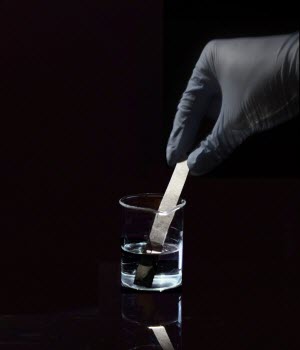 The researchers make their SSAs using a dip-and-dry technique which is considerably simpler than common manufacturing methods for SSAs.Photo courtesy of Jyotirmoy Mandal and Yuan Yang/Columbia EngineeringWorking with instruments and facilities in Columbia Engineering laboratory space and the Columbia Nano Initiative (CNI), the researchers were able to fabricate metal-based plasmonic SSAs using an inexpensive process that can tune the SSAs to suit different operating conditions, and is compatible with industrial manufacturing methods.

By dipping strips coated with a reactive metal (zinc) into a solution containing ions of a less reactive metal (copper), solar-absorbing nanoparticles of copper can be easily formed on the zinc strips by a galvanic displacement reaction.

“The beauty of the process is that it can be done very simply,” said Jyotirmoy Mandal, lead author of the study and a doctoral student in Yuan Yang’s group. “We only needed strips of metals, scissors—to cut the strips to size—a salt solution in a beaker, and a stopwatch to time the dipping process.”

With its wide angle, the SSA addressed another long-standing problem faced by solar-absorbing surfaces:  the ability to absorb sunlight throughout the day from sunrise to sunset. In tests, the resulting SSAs showed a significantly higher solar absorption at all angles (~97% absorption when the sun is above, ~80% when near the horizon) than existing designs.

Ronggui Yang, a professor and S.P. Chip and Lori Johnson Faculty Fellow in the Department of Mechanical Engineering at the University of Colorado at Boulder, who was not involved in the study, noted that significant challenges exist in obtaining wide-angle high solar absorptance materials with low thermal emittance.

“A low-cost and scalable approach is much sought after by various researchers,” he said. “I am excited that Yang's research team demonstrated a scalable and environment-friendly process based on the ‘dip-and-dry’ technique. Their durable and high performance plasmonic solar absorber will find immediate applications in solar-thermal systems.”

The team plans to test other combinations of metals besides zinc-copper and zinc-silver and explore ways to further increase efficiencies. They are especially excited about the potential for the simple and affordable process to be utilized for solar conversion in developing countries.

“It is crucial for scientists to find practical ways to address energy- and environment-related problems in communities where they are most acute, like in South Asia,” said Mandal.

”This is a promising instance of how novel optical surfaces for energy-related applications can be developed relatively simply, cheaply, and sustainably,” said Yuan Yang. “Easy-to-manufacture solar absorbers could play an important role in bringing about a renewable energy future.”

The research was conducted by researchers from Columbia Engineering, the Department of Chemistry at Columbia University, and Stanford University.