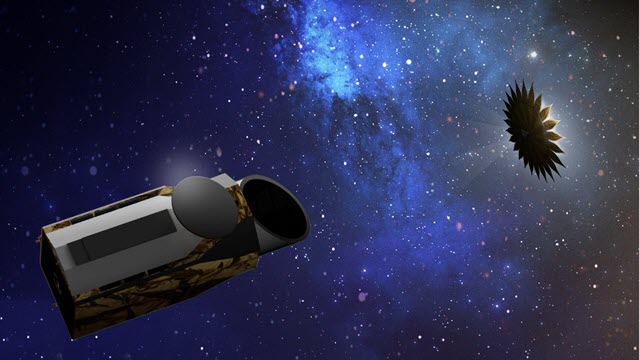 HabEx is one of four mission concepts proposed by NASA to be “the next Great Observatory” – a large-scale mission that will play an important role in the space science the United States invests in over the next decade.Credit: Scott Gaudi

Astronomers are making the case for a new mission to search for Earth-like planets outside our solar system.

The mission, nicknamed “HabEx” for “The Habitable Exoplanet Observatory,” would use a telescope with a mirror larger than Hubble’s, and would employ origami techniques to utilize an external “starshade,” which would block the light from the parent star and enable the search for and characterization of dim planets orbiting that star, according to a presentation at the annual meeting of the American Geophysical Union.

“Our goal is to see if we can find a planet that is similar to Earth—one that can support life,” said Scott Gaudi, one of the project’s co-chairs. “While we’ve identified a number of planets outside our solar system, so far, none have conclusively been shown to have the elements necessary for habitability.”

Gaudi, who is an astronomy professor at The Ohio State University, said the mission would be “the next logical step” in the search for planets similar to our Earth.

The project is one of four mission concepts proposed by NASA to be “the next Great Observatory”—a large-scale mission that will play an important role in the space science the United States invests in over the next decade. The federal Decadal Survey intends to make its recommendation on which project—if any—should receive funding by 2021. If prioritized, the mission would likely not launch until the 2030s.

HabEx would have a mirror that is four meters wide—as compared to Hubble’s 2.4-meter mirror—and would be used in conjunction with a starshade to search the skies for light from other planets. That light is typically drowned out by brighter light from nearby stars, including our sun, Gaudi said. But HabEx would deflect starlight using the starshade, a 52-meter flower-shaped disk that would go into space folded origami-like into a tight spiral.

The starshade would unfold once the satellite reached its orbit and fly nearly 77,000 kilometers from the telescope, blocking light from stars but allowing light reflecting off other planets to reach the telescope’s instruments.

The telescope would then search nearby stars that are similar to the sun for signs of planets that have water or carbon dioxide—two signs that a planet might be habitable. The telescope would also have a a very powerful camera that could take pictures of nearby planetary systems.

Those pictures would be the first “family portraits” of those systems, Gaudi said.

The telescope would have additional instrumentation as well, including a coronagraph, a piece of equipment that can also characterize planets outside our solar system and record images of them.

The mission is designed to collect data on exoplanets for about a decade. The telescope would also run other experiments to attempt to understand more about our own solar system.

One of the other three mission concepts under consideration by NASA would also search for habitable exoplanets, but on a larger scale and with a heftier price tag than HabEx. (HabEx is estimated to cost about $7 billion over 10 years.)

The HabEx mission was designed by astronomers, physicists and engineers from around the country, including the NASA Jet Propulsion Laboratory in California. If it is selected, the mission would likely require international collaboration among universities, governments, and corporations to be successful, Gaudi said, similar to other large-scale space missions in the past.

The four mission concepts are the finalists for the next Decadal Survey, a program that identifies flagship space missions and experiments by surveying scientists who study space and asking them to identify priorities for space exploration. The next flagship mission after the James Webb Space Telescope, the Wide Field Infrared Survey Telescope, or WFIRST, is in the planning stages. Ohio State astronomers have played an important role in that mission as well.