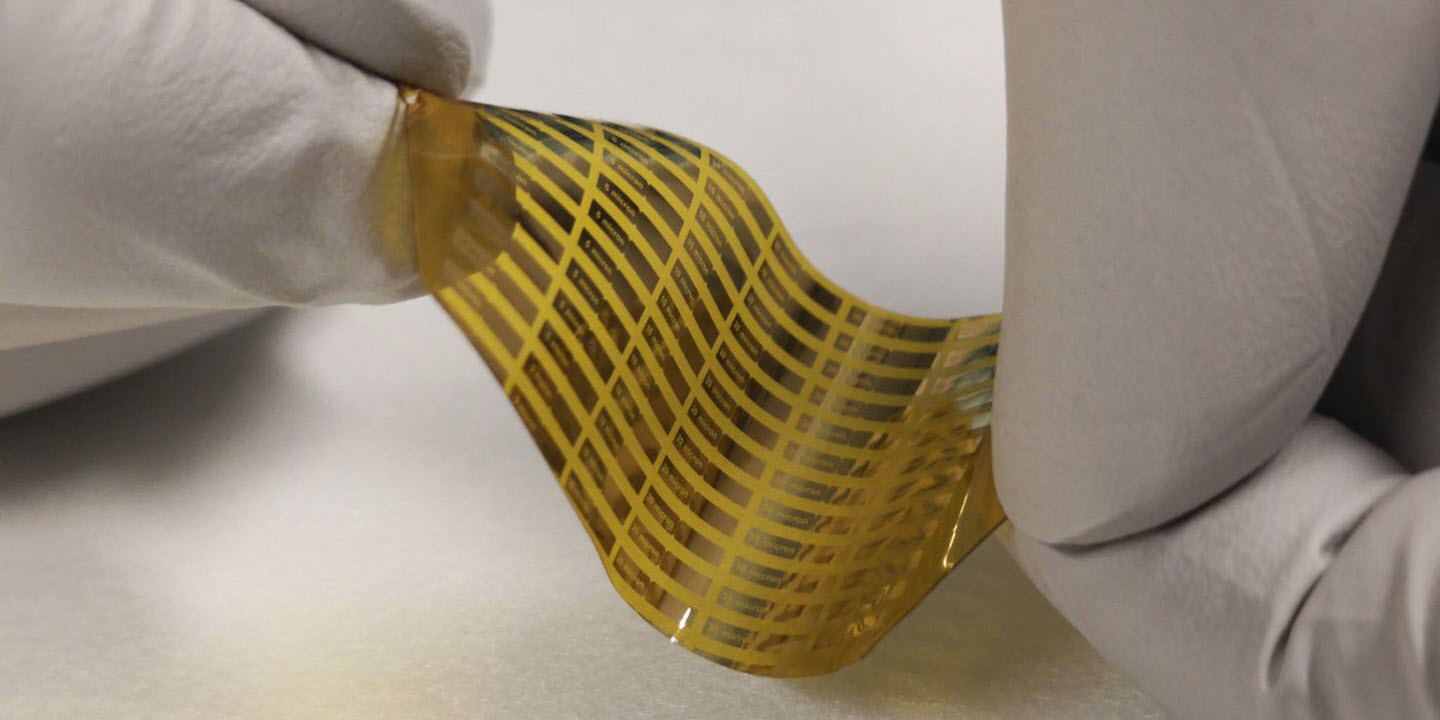 The nanoscale terahertz wave generator can be implemented on flexible substrates.
© EPFL / POWERlab

Terahertz (THz) waves fall between microwave and infrared radiation in the electromagnetic spectrum, oscillating at frequencies of between 100 billion and 30 trillion cycles per second. These waves are prized for their distinctive properties: they can penetrate paper, clothing, wood, and walls, as well as detect air pollution. THz sources could revolutionize security and medical imaging systems. What's more, their ability to carry vast quantities of data could hold the key to faster wireless communications.

THz waves are a type of non-ionizing radiation, meaning they pose no risk to human health. The technology is already used in some airports to scan passengers and detect dangerous objects and substances.

Despite holding great promise, THz waves are not widely used because they are costly and cumbersome to generate. But new technology developed by researchers at EPFL could change all that. The team at the Power and Wide-band-gap Electronics Research Laboratory (POWERlab), led by professor Elison Matioli, built a nanodevice (1 nanometer = 1 millionth of a millimeter) that can generate extremely high-power signals in just a few picoseconds—or one trillionth of a second—which produces high-power THz waves.

The technology, which can be mounted on a chip or a flexible medium, could one day be installed in smartphones and other hand-held devices. The work first-authored by Mohammad Samizadeh Nikoo, a PhD student at the POWERlab, has been published in the journal Nature.

The compact, inexpensive, fully electric nanodevice generates high-intensity waves from a tiny source in next to no time. It works by producing a powerful "spark," with the voltage spiking from 10 V (or lower) to 100 V in the range of a picosecond. The device is capable of generating this spark almost continuously, meaning it can emit up to 50 million signals every second. When hooked up to antennas, the system can produce and radiate high-power THz waves.

The device consists of two metal plates situated very close together, down to 20 nanometers apart. When a voltage is applied, electrons surge towards one of the plates, where they form a nanoplasma. Once the voltage reaches a certain threshold, the electrons are emitted almost instantly to the second plate. This rapid movement enabled by such fast switches creates a high-intensity pulse that produces high-frequency waves.

Conventional electronic devices are only capable of switching at speeds of up to one volt per picosecond—too slow to produce high-power THz waves.

The new nanodevice, which can be more than ten times faster, can generate both high-energy and high-frequency pulses. "Normally, it's impossible to achieve high values for both variables," says Matioli. "High-frequency semiconductor devices are nanoscale in size. They can only cope with a few volts before breaking out. High-power devices, meanwhile, are too big and slow to generate terahertz waves. Our solution was to revisit the old field of plasma with state-of-the-art nanoscale fabrication techniques to propose a new device to get around those constraints."

According to Matioli, the new device pushes all the variables to the extreme: "High-frequency, high-power and nanoscale aren't terms you'd normally hear in the same sentence."

"These nanodevices, on one side, bring an extremely high level of simplicity and low-cost, and on the other side, show an excellent performance. In addition, they can be integrated with other electronic devices such as transistor. Considering these unique properties, nanoplasma can shape a different future for the area of ultra-fast electronics," says Samizadeh.

The technology could have wide-ranging applications beyond generating THz waves. "We're pretty sure there'll be more innovative applications to come," adds Matioli.