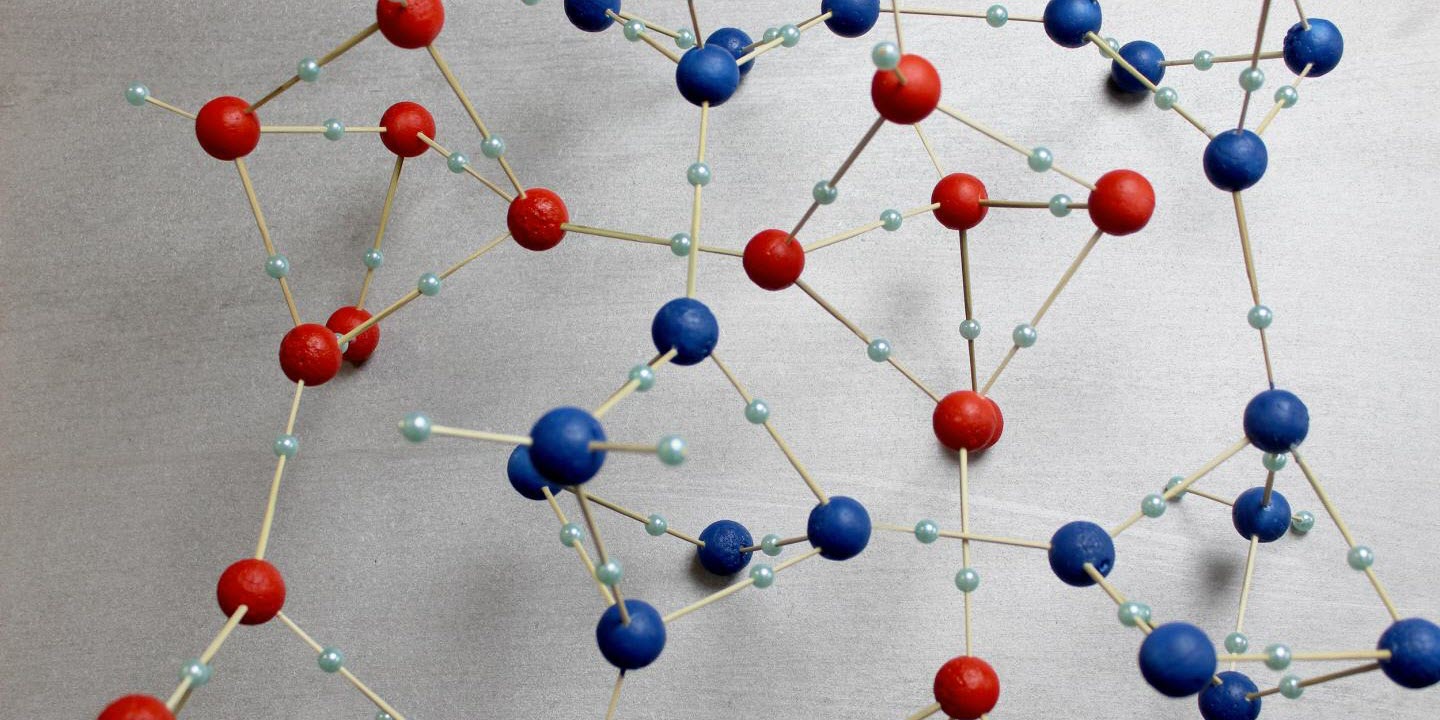 Ice is a very versatile material. In snowflakes or ice cubes, the oxygen atoms are arranged hexagonally. This ice form is called ice one (ice I). "Strictly speaking, however, these are not actually perfect crystals, but disordered systems in which the water molecules are randomly oriented in different spatial directions," explains Thomas Loerting from the Institute of Physical Chemistry at the University of Innsbruck, Austria.

Including ice I, 18 crystalline forms of ice were known so far, which differ in the arrangement of their atoms. The different types of ice, known as polymorphs, form depending on pressure and temperature and have very different properties. For example, their melting points differ by several hundred degrees Celsius. "It's comparable to diamond and graphite, both of which are made of pure carbon," the chemist explains.

When conventional ice I is cooled strongly, the hydrogen atoms can arrange themselves periodically in addition to the oxygen atoms if the experiment is conducted correctly. Below minus 200 degrees Celsius, this can lead to the formation of so-called ice XI, in which all water molecules are ordered according to a specific pattern. Such ordered ice forms differ from the disordered parental forms, especially in their electrical properties. In the current work, the Innsbruck chemists deal with the parent form ice VI, which is formed at high pressure, for example in the Earth's mantle. Like hexagonal ice, this high-pressure form of ice is not a completely ordered crystal.

More than 10 years ago, researchers at the University of Innsbruck produced a hydrogen-ordered variant of this ice, which found its way into textbooks as ice XV. By changing the manufacturing process, three years ago Loerting's team succeeded for the first time in creating a second ordered form for ice VI. To do this, the scientists significantly slowed down the cooling process and increased the pressure to around 20 kbar. This enabled them to arrange the hydrogen atoms in a second way in the oxygen lattice and produce ice XIX. "We found clear evidence at that time that it is a new ordered variant, but we were not able to elucidate the crystal structure." Now his team has succeeded in doing just that using the gold standard for structure determination—neutron diffraction. 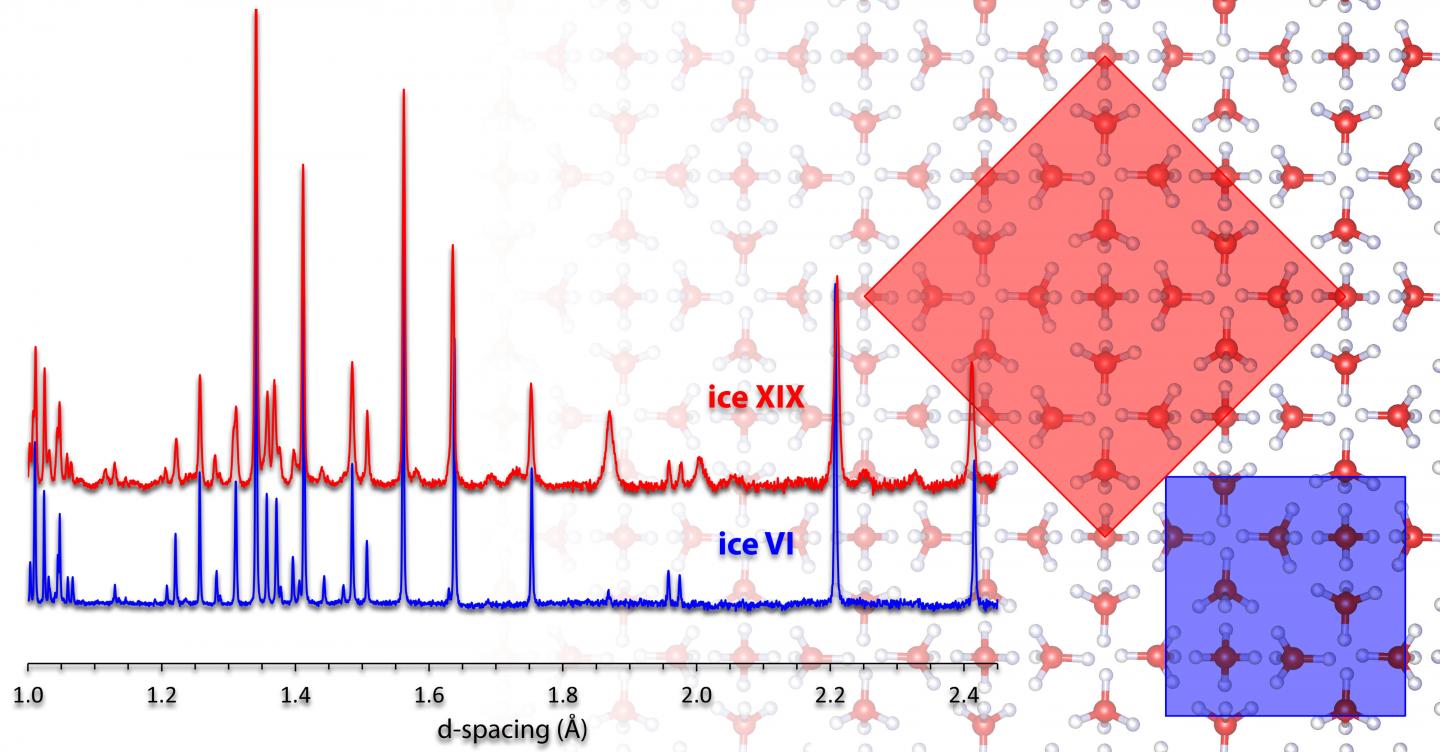 Illustration showing the relationship between the ice VI and XIX unit cells viewed down their c-axes, and the differences in their diffraction patterns, with color coding red for ice XIX and blue for ice VI.
Uni Innsbruck

For the clarification of the crystal structure, an essential technical hurdle had to be overcome. In an investigation using neutron diffraction, it is necessary to replace the light hydrogen in water with deuterium ("heavy hydrogen").

"Unfortunately, this also changes the time scales for ordering in the ice manufacturing process," says Loerting. "But PhD student Tobias Gasser then had the crucial idea of adding a few percent of normal water to the heavy water—which turned out to speed up the ordering immensely."

With the ice obtained in this way, the Innsbruck scientists were finally able to measure neutron data on the high-resolution HRPD instrument at the Rutherford Appleton Laboratory in England and painstakingly solve the crystal structure of ice XIX. This required finding the best crystal structure out of several thousand candidates from the measured data—much like searching for a needle in a haystack. A Japanese research group confirmed the Innsbruck result in another experiment under different pressure conditions. Both papers have now been published jointly in Nature Communications.

While conventional ice and snow are abundant on Earth, no other forms are found on the surface of our planet—except in research laboratories. However, the high-pressure forms ice VI and ice VII are found as inclusions in diamonds and have therefore been added to the list of minerals by the International Mineralogical Association (IMA). Many varieties of water ice are formed in the vastness of space under special pressure and temperature conditions. They are found, for example, on celestial bodies such as Jupiter's moon Ganymede, which is covered by layers of different ice varieties.

Ice XV and ice XIX represents the first sibling pair in ice physics in which the oxygen lattice is the same, but the pattern how hydrogen atoms are ordered is different.

"This also means that for the first time it will now be possible to realize the transition between two ordered ice forms in experiments," Loerting is pleased to report. Since the 1980s, researchers at the University of Innsbruck, Austria, are now responsible for the discovery of four crystalline as well as two amorphous ice forms.

The current research work was carried out within the framework of the Research Platform for Materials and Nanoscience at the University of Innsbruck and was financially supported by the Austrian Science Fund FWF.

- This press release was originally published on the University of Innsbruck website. It has been edited for style