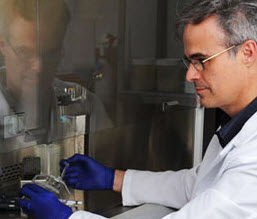 “Vitamin D engaged with known longevity genes—it extended median lifespan by 33 percent and slowed the aging-related misfolding of hundreds of proteins in the worm,” said Gordon Lithgow, PhD, senior author and Buck Institute professor. “Our findings provide a real connection between aging and disease and give clinicians and other researchers an opportunity to look at vitamin D in a much larger context.”

The study shines a light on protein homeostasis, the ability of proteins to maintain their shape and function over time. It’s a balancing act that goes haywire with normal aging—often resulting in the accumulation of toxic insoluble protein aggregates implicated in a number of conditions, including Alzheimer’s, Parkinson’s, and Huntington’s diseases, as well as type 2 diabetes and some forms of heart disease. “Vitamin D3, which is converted into the active form of vitamin D, suppressed protein insolubility in the worm and prevented the toxicity caused by human beta-amyloid which is associated with Alzheimer’s disease,” said Lithgow. “Given that aging processes are thought to be similar between the worm and mammals, including humans, it makes sense that the action of vitamin D would be conserved across species as well.”

Postdoctoral fellow Karla Mark, PhD, led the team doing the experiments. She says the pathways and the molecular network targeted in the work (IRE-1/XBP-1/SKN-1) are involved in stress response and cellular detoxification. “Vitamin D3 reduced the age-dependent formation of insoluble proteins across a wide range of predicted functions and cellular compartments, supporting our hypothesis that decreasing protein insolubility can prolong lifespan.”

“We’ve been looking for a disease to associate with vitamin D other than rickets for many years and we haven’t come up with any strong evidence,” said Clifford Rosen, MD, the director of the Center for Clinical and Translational Research and a senior scientist at the Maine Medical Center Research Institute studying osteoporosis and obesity. “But if it’s a more global marker of health or longevity as this paper suggests, that’s a paradigm shift. Now we’re talking about something very different and exciting.”

“This work is really appealing and challenging to the field,” said Janice M. Schwartz, MD, a professor of medicine and bioengineering and therapeutic sciences the University of California, San Francisco, and a visiting research scientist at the Jewish Home in San Francisco. She has studied vitamin D supplementation in the elderly. “We focus on vitamin D and the bones because that’s where we can measure its impact. I believe that vitamin D is as crucial for total body function and the muscles as it is for bones. Vitamin D influences hundreds of genes—most cells have vitamin D receptors, so it must be very important.”

How much vitamin D do humans need and how do they best get it? The issue is confusing with disagreement rampant among experts. The Institute of Medicine’s (IOM) latest recommendations (from 2011) pertain only to vitamin D’s role in bone health and fracture reduction. Experts concluded that evidence for other proposed benefits of vitamin D was inconsistent, inconclusive, or insufficient to set recommended intakes. The IOM recommends a daily intake of 600 International Units (IU) for people between 1 and 70 years old, and 800 IU daily for those older. The upper limit—the levels above which health risks are thought to increase—was set at 4,000 IU per day for adults. Excess vitamin D can raise blood levels of calcium which leads to vascular and tissue calcification, with subsequent damage to the heart, blood vessels, and kidneys.

Many vitamin D researchers and some health organizations, including the Endocrine Society and the International Osteoporosis Foundation, disagreed with the IOM’s recommendations for daily intake, instead recommending supplementation of 800 to 2,000 IU per day, at least for people known or likely to have low blood levels. The disagreement highlights another difficulty: measuring blood levels of vitamin D is problematic given a lack of standardization and reliability among labs. Blood levels of the precursor to the active vitamin D are measured in nanograms per milliliter (ng/mL) in the U.S. Many researchers and expert groups have argued that a blood level of at least 30 ng/mL is optimal; some call for optimum levels to be set at 40 or 50 ng/mL. But the IOM report concluded that blood levels starting at 20 ng/mL would be adequate for bone health in the vast majority of people.

Based on problems with laboratory standards and a lack of agreed-upon meaning of results, both Rosen and Schwartz agree that the costs of universal testing for vitamin D levels would outweigh the benefits. Instead, both recommend universal supplementation of between 800 – 1000 IU of vitamin D daily for adults. “It’s safe, there’s no reason for anyone not to take it,” said Schwartz, who has written about vitamin D for the popular press.

Schwartz says older adults may be particularly prone to vitamin D deficiency because the skin’s ability to manufacture vitamin D from sun or UV light exposure declines with age, adding that the elderly are less likely to spend time in the sun, are more likely to have diets lacking in sources of vitamin D, and may suffer from gastrointestinal disorders that make it harder to absorb vitamin D. Others prone to vitamin D deficiency include those with darker skin and those who live in higher latitudes where the sun’s angle is low in the sky.

Bringing it back to aging

Given adequate funding, senior author Lithgow plans to test vitamin D in mice to measure and determine how it affects aging, disease and function—and he hopes that clinical trials in humans will go after the same measurements. “Maybe if you’re deficient in vitamin D, you’re aging faster. Maybe that’s why you’re more susceptible to cancer or Alzheimer’s,” he said. “Given that we had responses to vitamin D in an organism that has no bone suggests that there are other key roles, not related to bone, that it plays in living organisms.”

Lithgow gave a shout out to the tiny, short-lived nematode worms which populated this study. “Working in these simple animals allows us to identify novel molecular pathways that influence how animals age,” he said. “This gives us a solid starting point to ask questions and seek definitive answers for how vitamin D could impact human health. We hope that this work will spur researchers and clinicians to look at vitamin D in a larger, whole-person context that includes the aging process.”