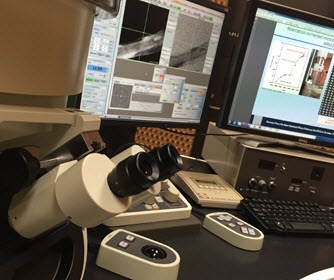 Helenita, the transmission electron microscope that allowed Ponce to identify Borophene.Photo courtesy of the University of Texas at San Antonio(Jan. 4, 2016) -- In a new study published in Science, Arturo Ponce, assistant professor of physics at the University of Texas at San Antonio, details how he has expanded on a Nobel Prize-winning project. Using UTSA’s facilities, Ponce has identified and characterized a 2-D layer of boron atoms that could have tremendous impact on the electronics world.

“This is an incredibly exciting time,” Ponce said. “This discovery will tremendously help in the development of future electronic devices.”

In 2010, scientists at the University of Manchester won the Nobel Prize in Physics for their work on graphene, a 2-D material which is essentially a net of carbon atoms. Ponce, along with his PhD student, Diego Alducin, and his colleague, Miguel Yacaman, chair of the UTSA Department of Physics, has taken this work a step further by working with boron, a smaller atom than carbon that is incredibly hard to identify, using the power of UTSA’s massive electron microscope, Helenita.

The 2-D layer of boron atoms, now known as Borophene, was made at Northwestern University and sent to Ponce to analyze with Helenita. The microscope magnifies atoms up to atomic resolution. Because Borophene is so small and light, Ponce said that the material has the ability to significantly effect every day electronics, like cell phones.

Similar 2-D materials are already making waves in the electronics world. Flexible devices like the Apple Watch are a result of growing and identifying these tiny layers. Because Borophene is so thin, it can act as a semiconductor and send anisotropic electronic signals much faster than other materials, such as graphene. That could result in smarter, quicker cell phones that could even be foldable.

“In electronics, the idea is to reduce the size of these devices,” Ponce said. “A cell phone is made up of several layers, and boron is very small so you can make these layers even thinner and more flexible.”

Depending on how the technology develops, Borophene could be a part of the average person’s every day electronics in ten to 20 years.

As no one had ever seen Borophene before, Ponce had to develop a new method to identify the material under the microscope. He used aberration-corrected electron microscopy, an experimental technique that allowed him to see the Borophene more clearly by looking at the space around the atoms rather than the atoms themselves. He also used Helenita to photograph the substance in several different ways so that he could compare the different images and look for aberrations. He used a layer of silver to make the Borophene stand out in contrast.

The possibility to register columns of atoms becomes a challenge when the columns are confined in an atomic layer of atoms. Particularly, light atoms are very sensitive to the electrons used to image their arrangement. In this way, a region of scattered electrons can provide the atomic information eliminating the strong contribution of other type of electrons, such as the high angle scattered or transmitted electrons. This region, called annular bright field, was calibrated in Helenita for this successful analysis.

“Dr. Ponce’s work is a source of immense pride and demonstrates the top-tier work conducted by leading researchers using state of the art instruments at UTSA,” said George Perry, dean of the College of Sciences.