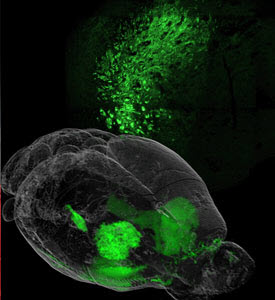 “This is the first step in the development of a treatment for patients with major depressive disorder using this new strategy,” said senior author Dr. James Bibb, Professor of Psychiatry, and Neurology and Neurotherapeutics at UT Southwestern.

Major depressive disorder (MDD) may be triggered or exacerbated by severe or chronic stress. Depression affects more than 120 million people worldwide. Between 20 percent to 40 percent of people with depression are not helped by existing therapies, highlighting the need for new treatments and approaches.

The study was supported by the Center for Depression Research and Clinical Care at UT Southwestern. The Center, established with a $5 million lead gift from the Hersh Foundation earlier this year, combines basic research, translational clinical research in genetics, functional brain imaging, and treatment research across the entire age span, with a special focus on treatment of resistant, chronic, or recurrent depression. 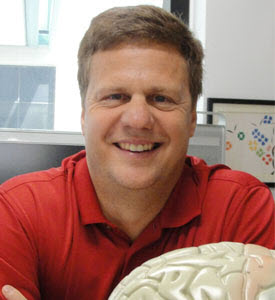 Dr. James BibbPhoto courtesy of the UT Southwestern Medical Center“These exciting findings could help us develop very novel treatments to reduce stress response and prevent or treat depression effectively in the future,” said Dr. Madhukar Trivedi, Director of the Center for Depression Research and Clinical Care, Chief of the Division of Mood Disorders, Professor of Psychiatry, and holder of the Betty Jo Hay Distinguished Chair in Mental Health.

The chemical changes occurred in a region of the brain called the nucleus accumbens, which has a significant role in the processing of motivation, pleasure, and reward.

Researchers found that levels of cAMP can be elevated by disrupting the activation of an enzyme called phosphodiesterase-4 (PDE4). Knocking out the regulatory protein kinase Cdk5 in brain cells disrupted PDE4 function and elevated cAMP levels. This positively affected behavioral responses of the mice to stress-inducing experiments.

The researchers then developed a drug-like peptide that selectively blocked PDE4 function and increased the struggling response of mice to a test of acute stress commonly used to assess antidepressant efficacy.