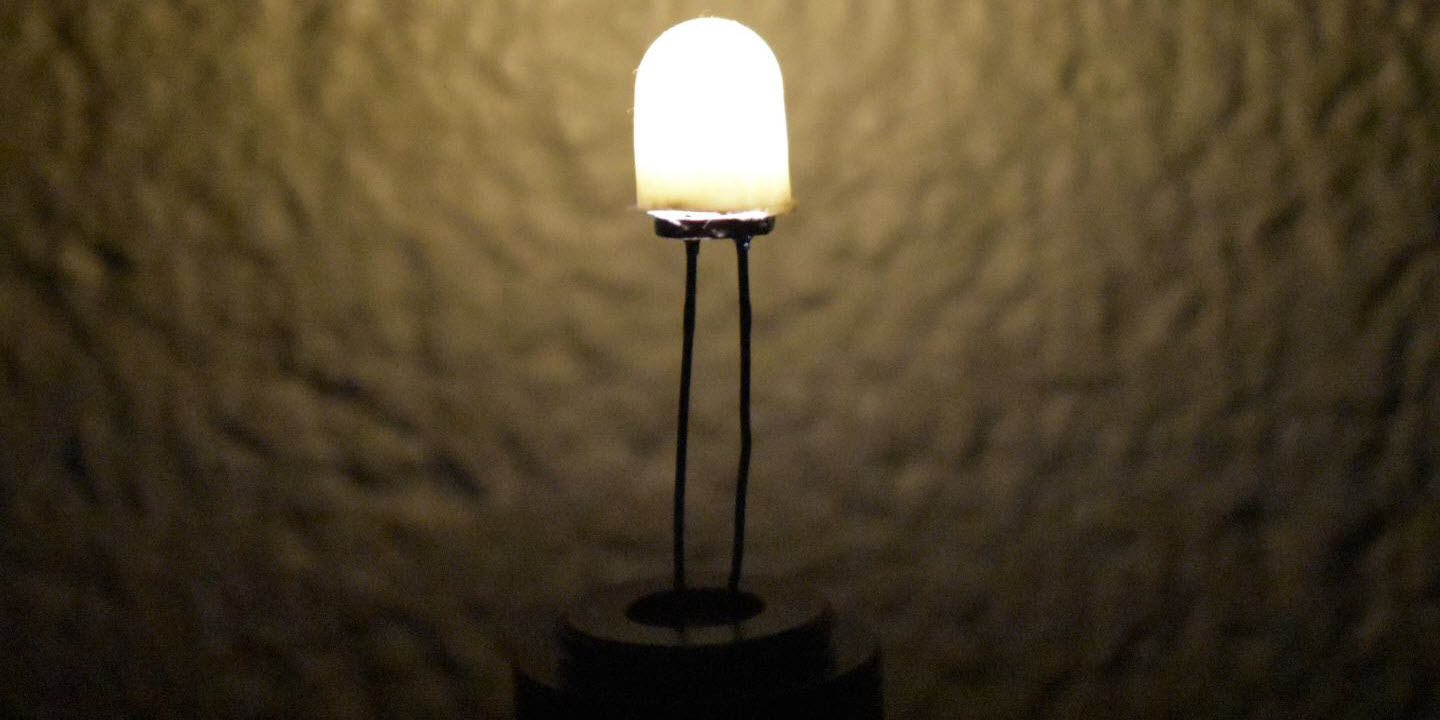 This prototype device creates a warm white light without the blue hues that can cause health problems.
Jakoah Brgoch

To be more energy efficient, many people have replaced their incandescent lights with light-emitting diode (LED) bulbs. However, those currently on the market emit a lot of blue light, which has been linked to eye troubles and sleep disturbances. Now, researchers reporting in ACS Applied Materials & Interfaces have developed a prototype LED that reduces—instead of masks—the blue component, while also making colors appear just as they do in natural sunlight.

LED light bulbs are popular because of their low energy consumption, long lifespan and ability to turn on and off quickly. Inside the bulb, an LED chip converts electrical current into high-energy light, including invisible ultraviolet (UV), violet or blue wavelengths. A cap that is placed on the chip contains multiple phosphors—solid luminescent compounds that convert high-energy light into lower-energy visible wavelengths. Each phosphor emits a different color, and these colors combine to produce a broad-spectrum white light. Commercial LED bulbs use blue LEDs and yellow-emitting phosphors, which appear as a cold, bright white light similar to daylight. Continual exposure to these blue-tinted lights has been linked to cataract formation, and turning them on in the evening can disrupt the production of sleep-inducing hormones, such as melatonin, triggering insomnia and fatigue. To create a warmer white LED bulb for nighttime use, previous researchers added red-emitting phosphors, but this only masked the blue hue without getting rid of it. So, Jakoah Brgoch and Shruti Hariyani wanted to develop a phosphor that, when used in a violet LED device, would result in a warm white light while avoiding the problematic wavelength range.

As a proof of concept, the researchers identified and synthesized a new luminescent crystalline phosphor containing europium ((Na1.92Eu0.04)MgPO4F). In thermal stability tests, the phosphor's emission color was consistent between room temperature and the higher operating temperature (301 F) of commercial LED-based lighting. In long-term moisture experiments, the compound showed no change in the color or intensity of light produced. To see how the material might work in a light bulb, the researchers fabricated a prototype device with a violet-light LED covered by a silicone cap containing their luminescent blue compound blended with red-emitting and green-emitting phosphors. It produced the desired bright warm white light while minimizing the intensity across blue wavelengths, unlike commercial LED light bulbs. The prototype's optical properties revealed the color of objects almost as well as natural sunlight, fulfilling the needs of indoor lighting, the researchers say, though they add that more work needs to be done before it is ready for everyday use.

- This press release was supplied by the American Chemical Society. It has been edited for style