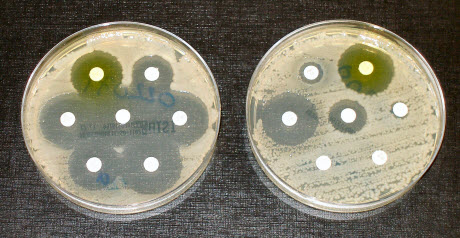 Photo credit: Dr Graham Beards, Wikimedia CommonsSASKATOON – A University of Saskatchewan (U of S) research team has discovered a way to prevent bacteria from developing resistance to antibiotics, potentially helping to blunt the edge of a looming threat to public health around the world.

“Bacteria have a remarkable ability to acquire resistance against antibiotics,” said U of S biochemist Ron Geyer, who led the study published Mar. 17 in the journal Cell Chemical Biology. “We need new strategies to block development of resistance and to prolong the life of antibiotics, and we believe our work has revealed a promising direction.”

It’s an urgent problem. In 2014, the World Health Organization reported that antibiotic resistance “is now a major threat to public health,” and warned of a return to a pre-antibiotic era, where “common infections and minor injuries which have been treatable for decades can once again kill.”

The U of S team looked at the “SOS response,” which happens when bacteria are attacked by antibiotics. The bacterial cell stops its normal cycle in order to repair its DNA. The process is quite error-prone, so there are a lot of mutations—plus the response allows the bacteria to pick up genes from other bacteria in a process called horizontal gene transfer.

Since there are millions of bacteria, there are bound to be a few whose mutations make some of them resistant to antibiotics. These resistant bacteria survive and multiply.

Geyer and his team developed compounds that prevented the SOS response, made the antibiotics more effective, reduced mutations, and blocked horizontal gene transfer.

“Our results suggest the inhibitors should be useful with a broad spectrum of bactericidal antibiotics in Gram-negative or Gram-positive bacteria,” Geyer said.

He cautioned that much work remains to be done, for example, to tailor methods to better deliver inhibitors.

The U of S has applied for a patent for the inhibitor technology and is currently seeking partners to license and develop it. The work is supported by the Natural Sciences and Engineering Research Council of Canada.