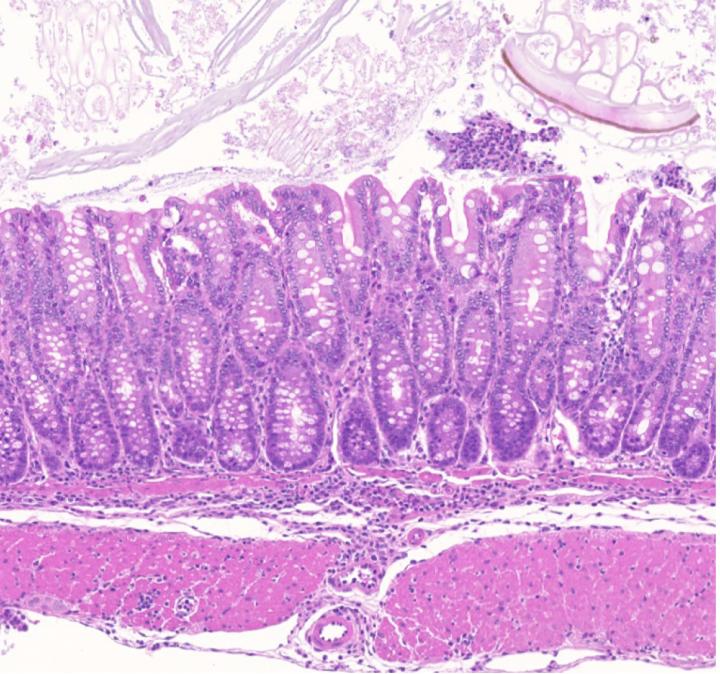 Gut inflammation in mice lacking a homolog of a distal enhancer found at the human chromosome 11q13.5 disease risk locus.
The Babraham Institute

A study led by researchers at the Babraham Institute in collaboration with the Wellcome Sanger Institute has uncovered how variations in a non-protein coding 'dark matter' region of the genome could make patients susceptible to complex autoimmune and allergic diseases such as inflammatory bowel disease. The study in mice and human cells reveals a key genetic switch that helps immune responses remain in check. Published May 13 in the leading scientific journal Nature, the research, involving collaborations with research institutions in the UK and worldwide, identifies a new potential therapeutic target for the treatment of inflammatory diseases.

Over the last 20 years, the genetic basis of susceptibility to complex autoimmune and allergic diseases, such as Crohn's disease, ulcerative colitis, type 1 diabetes, and asthma, has been narrowed down to a particular region of chromosome 11. This work has involved large scale genome-wide association studies (GWAS), a genome-wide 'spot-the-difference' comparison between the genomes of individuals with or without a disease, to highlight regions of variation in the DNA code. This can identify potential genetic causes, and reveal possible drug targets.

However, most of the genetic variations responsible for the susceptibility to complex immune and allergic diseases are concentrated within regions of the genome that don't encode proteins—the genome's 'dark matter.' This means there's not always a clear gene target for further investigation and the development of treatments.

Recent advances in sequencing-based approaches have shown that these disease-associated genetic changes are concentrated within regions of DNA called enhancers, which act as switches to precisely regulate the expression of genes. Further technological developments have allowed scientists to map physical interactions between different remote parts of the genome in 3D, so they can connect enhancers in non-coding regions with their target gene.

To gain insight into inflammatory disease, a large team of researchers used these methods to study an enigmatic non-protein-coding region of the genome whose genetic variations are associated with increased immune disease risk. They identified an enhancer element that is required for the immune system's 'peace-keepers' and immune response mediators, regulatory T cells (Tregs), to balance an immune response.

"The immune system needs a way of preventing reactions to harmless self- and foreign substances and Treg cells play a vital role in this," said lead researcher and Babraham Institute group leader Dr Rahul Roychoudhuri. "They're also crucial in maintaining balance in the immune system, so that our immune responses are kept in check during infections. Tregs only represent a small percentage of the cells making up our complete immune system but they're essential; without them we die from excessive inflammation. Despite this important role, there has been little evidence that unequivocally links the genetic variations that cause certain individuals to be susceptible to inflammatory diseases to changes in Treg function. It turns out that non-protein-coding regions provided us with the opportunity to address this important question in the field."

Evolution gave the researchers a helping hand. The researchers took advantage of an approach called shared synteny, where not just genes are conserved between species, but a whole section of the genome. Similar to finding part of your book collection duplicated in your neighbor's house, including the order of their arrangement on the bookshelf.

They used this genomic similarity to translate what was known about the enhancer in the human genome and find the corresponding region in mice. They then explored the biological effect of removing the enhancer using mouse models.

The researchers found that the enhancer element controls the expression of a gene in Treg cells, which encodes a protein called GARP (Glycoprotein A Repetitions Predominant). They showed that deleting this enhancer element caused loss of the GARP protein in Treg cells, and an uncontrolled response to a triggered inflammation of the colon lining. This demonstrated that the enhancer is required for Treg-mediated suppression of colitis, with a role for the GARP protein in this immune system control.

There was a similar effect in human Treg cells from healthy blood donors. The researchers identified an enhancer region whose activity was impacted by genetic variation specifically in Treg cells. The enhancer directly interacted with the human form of the same gene, and the genomic variations occurring in the enhancer element were associated with reduced GARP expression.

"Genetic variation provides important clues into disease processes that can be targeted by drugs," said Dr. Gosia Trynka, a senior author on the paper from the Wellcome Sanger Institute and Open Targets. "In our joint efforts here, we combined human and mouse research to gain invaluable insight into complex processes underlying immune diseases. This has identified GARP as a promising new drug target and brings us a step closer to developing more efficient therapies for people suffering from diseases such as asthma or inflammatory bowel disease."

Roychoudhuri concludes: "Decades of research have now identified the variations in our genomes that make some of us more susceptible to inflammatory diseases than others. It has been very difficult, however, to make sense of how these variations relate to immune disease since many of them occur in non-protein-coding regions, and therefore the implications of these changes are poorly understood. Studies such as these will enable us to link the genetic switches that commonly reside in such disease-associated non-coding regions with the genes they control in different cell types. This will yield new insights into the cell types and genes underlying disease biology and provide new targets for therapeutic development."

- This press release was originally published on the Babraham Institute website