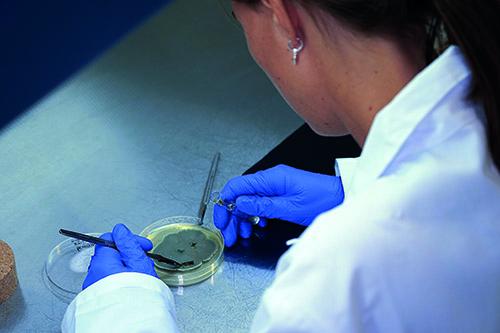 The agricultural industry relies heavily on chemical fungicides to protect crops. Many of these products have a detrimental effect on human and animal health. As a result, some of the most effective fungicides are under consideration to be banned in a number of geographic areas, especially in Europe.

"Despite efforts to develop natural protection, very few efficient solutions have been commercialized," explained Sylvain Dubey, a plant pathologist based in Switzerland. "And there are still no effective environmentally friendly methods of combating the fungal pathogens that infect large groups of crops."

Dubey and colleagues were inspired by earlier research in which they showed that compounds with antifungal activities can be found in various organisms from prokaryotes to eukaryotes such as plants, with oil mixtures containing terpenes, phenols and alcohols, glycosides, alkaloids, and recently discovered glucosinolate derivatives. These latter compounds are primarily present in the Brassicaceae family.

"Because of these results, we investigated the fungitoxic activity of natural isothiocyanate derivatives of glucosinolates as well as semi-synthetic derivatives and their synergy."

In a recent study published in PhytoFrontiers journal, they confirmed that 13 natural and semi-synthetic glucosinolate derivatives are efficient fungicides alone or when used in combination against widespread genetically distant species of fungal plant pathogens. Combinations of these compounds showed strong synergistic fungitoxic effects.

"Interestingly, physico-chemical characteristics of fungitoxic glucosinolate derivatives differ from those showing no activities or from those that are known for their insecticidal or insect attractive properties," explained Dubey. "Indeed, fungitoxic compounds exhibit significantly higher bioaccumulation potential and are more lipophilic than compounds with no fungitoxic activities. It is therefore possible to anticipate the potential function of glucosinolate derivatives based on their physico-chemical properties and the differences in the way compounds will interact with the surrounding environment and hence organisms."

Dubey and colleagues hope that their findings will pave the way for parties looking to develop environmentally friendly methods of combating fungal pathogens. Their research mirrors other research that has shown that biological compounds can be used to replace environmentally damaging pesticides. For more information, read "Isothiocyanate Derivatives of Glucosinolates as Efficient Natural Fungicides" published in PhytoFrontiers journal.