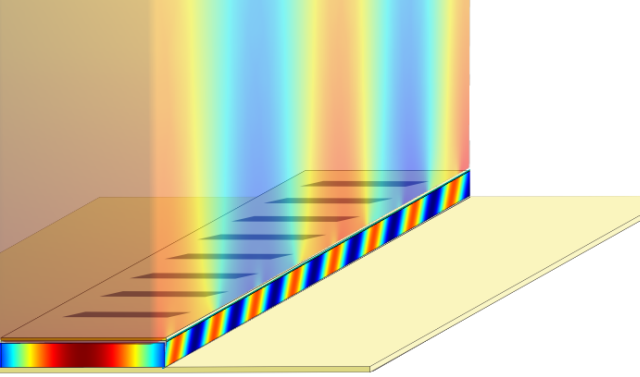 In this illustration of a terahertz plasmonic laser, the laser cavity is enclosed between two metal films (with periodic slits on the top film). The colors represent coherent SPP light waves. One wave is confined inside the 10-micron-thick cavity. The other, with a large spatial extent, is located on top of the cavity.Illustration courtesy of Sushil Kumar

Lasers have become indispensable to modern life since they were invented more than fifty years ago. The ability to generate and amplify light waves into a coherent, monochromatic, and well-focused beam has yielded applications too numerous to count: laser scanners, laser printers, laser surgery, laser-based data storage, ultrafast data communications via laser light, and the list goes on.

Lasers are found in all shapes, sizes and colors. They can be made of gases (gas lasers) or based on solid materials (solid-state lasers). They can emit light of different colors (or wavelengths or frequencies), from X-rays (short wavelengths) to visible to far-infrared (long wavelengths). They can be as big as a building (free-electron lasers) or as small as a laser pointer (semiconductor diode lasers).

In the past decade, researchers have attempted to miniaturize photonic technologies for dense integration onto tiny semiconductor chips. To that end, researchers are seeking to develop even smaller nanolasers, of which plasmonic lasers are the tiniest.

The plasmonic laser, says Sushil Kumar, associate professor of electrical and computer engineering at Lehigh University, uses metal films or nanoparticles to confine light energy inside the cavity from which laser light is generated. By storing light energy inside the cavity through a combination of electron oscillations in the integrated metal films or nanoparticles, plasmonic lasers utilize surface-plasmon-polaritons (SPPs) to store energy in dimensions that can be made smaller than the wavelength of light that they generate.

This unique ability of plasmonic lasers makes them attractive for potential applications in integrated (on-chip) optics, for transporting large swathes of data on-chip and between neighboring chips, and for ultrafast digital information processing.

Several problems need to be solved, however, before plasmonic lasers can be widely used. One of the main issues, says Kumar, is the difficulty of extracting light from the cavity of a plasmonic laser. The lasers are also extremely poor emitters of light, and whatever light does come out is highly divergent rather than focused, which severely limits their usefulness.

While most plasmonic lasers emit visible or near-infrared radiation, Kumar's group develops plasmonic lasers that emit long-wavelength terahertz radiation, which are also known as terahertz quantum-cascade lasers, or QCLs. As the brightest solid-state sources of terahertz radiation, says Kumar, QCLs are uniquely poised to find applications in biology and medicine for sensing and spectroscopy of molecular species, in security screening for remote detection of packaged explosives and other illicit materials, and in astrophysics and atmospheric science.

Kumar and his group have demonstrated that it is possible to induce plasmonic lasers to emit a narrow beam of light by adapting a technique called distributed feedback. They have experimentally implemented a scheme for terahertz plasmonic lasers that emit radiation at extremely long wavelengths (approximately 100 microns). The light energy in their laser is confined inside a cavity sandwiched between two metallic plates separated by a distance of 10 microns. Using a box-shaped cavity measuring 10 microns by 100 microns by 1,400 microns (1.4 millimeters), the group produced a terahertz laser with a beam divergence angle of just 4 degrees by 4 degrees, the narrowest divergence yet achieved for such terahertz lasers.

Kumar, who has conducted four years of experimental and theoretical research on the project, described the results in an article published July 6 in Optica, the journal of the Optical Society of America. “Terahertz plasmonic laser radiating in an ultra-narrow beam” was written by Chongzhao Wu, a PhD candidate in electrical engineering, and coauthored with Sudeep Khanal, also a PhD candidate in electrical engineering, and John L. Reno of the Center of Integrated Nanotechnologies at Sandia National Laboratories in New Mexico.

Distributed feedback (DFB) in lasers was introduced in early 1970s, says Kumar, when scientists learned that implementing periodicity (a patterned structure) enabled lasers to emit light at just one wavelength. The periodicity in the laser cavity provides feedback for sustained laser oscillations in the cavity by the mechanism of Bragg diffraction.

“There are two main reasons for giving lasers a periodic structure,” says Kumar. “The first is to improve spectral selectivity. A laser can emit light in several closely spaced wavelengths, or colors. But a laser with a periodic structure can be forced to emit light at just one wavelength by the mechanism of spectral filtering. Such a spectrally pure, single-mode laser is often indispensable for many applications.

Related Article: Team Refrigerates Liquids with a Laser for the First Time

“A periodic structure can also enhance the quality of the laser beam by channeling light intensely into a tight spot. Such narrow beam lasers can deliver light energy to a location where it is needed most. They can shine for long distances, and are easier to manipulate and re-direct at a desired location using small optical components.”

Many DFB schemes have been developed for different types of lasers. Because plasmonic lasers are relatively new, research to improve them using periodic photonic structures is still in its early stages.

“Our technique allows a plasmonic laser to radiate in a narrow beam, very much like a phased-array antenna,” says Kumar. His group implemented DFB in the laser by making periodic slits or “gratings” in one of the metal claddings that encase the laser cavity. The laser’s unique ability to emit a monochromatic, focused light beam stems from the degree of periodicity.

The group’s DFB technique has two unique aspects. The chosen periodicity is the most important technical contribution and, says Kumar, is distinctly different from previously established DFB design rules for solid-state lasers.

Second, the periodicity establishes an intense SPP wave which “hangs” in the surrounding medium of the laser’s cavity while remaining tied to its metal cladding, and which propagates in tandem with another SPP wave inside the cavity.

“All plasmonic lasers have SPPs inside their cavities,” says Kumar. “Our laser also generates SPPs in the air, or any other medium that may surround the laser. This is something unique which cannot be found in any other laser yet demonstrated.

“The large size of the SPP wave in the surrounding medium leads to a highly directive (narrow) radiation pattern from the plasmonic laser. This derives from the Fraunhofer diffraction formula in optics, which says the light-field distribution far from a light source (far-field) is the Fourier transform of the light-field distribution at the source (near-field). Effectively, when the near field is narrow, the far field is broad, and vice-versa.

“We have created a near field with a large spatial extent; this implies a narrow far-field or a focused beam.”

Kumar and Wu have filed a patent application on their invention, which he says could help plasmonic lasers, especially terahertz QCLs with narrow beams, find commercial applications.

“There is a very strong interest in security spectrometry,” the researchers wrote in an abstract for the recent TechConnect 2016 World Innovation Conference, where they won a TechConnect National Innovation Award. “Approximately 80 to 95 percent of explosives, and all commonly used ones, have unique and identifiable terahertz signatures.”

Kumar’s group fabricates lasers in the clean room of Lehigh’s Center for Photonics and Nanoelectronics. They grow their semiconductor material using molecular beam epitaxy through a collaboration with Reno. Kumar's project was supported by the National Science Foundation (NSF) from 2011-14. Kumar also received the NSF CAREER Award in 2014 to design the semiconductor material that constitutes the terahertz laser cavities. That material is based on alternating layers of gallium-arsenide and aluminum gallium-arsenide.

Kumar recently received another NSF award to improve output from terahertz plasmonic lasers so they emit up to 100 milliwatts of optical power while holding the angular divergence of the laser beam to less than 5 degrees. The group proposes to improve radiative efficiencies by “phase-locking” multiple laser cavities together, so they can operate in tandem and deliver brighter intensities of laser light at the desired location.