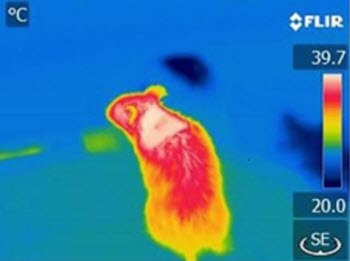 A thermal image of a mouse, with white indicating the location of brown fat (maximum heat generation).Photo credit: Nuria Matesanz, CNICScientists at the Centro Nacional de Investigaciones Cardiovasculares Carlos III (CNIC) have identified a protein that holds promise as a target for therapies to reduce obesity. Drs. Guadalupe Sabio and Nuria Matesanz have demonstrated that MKK6 controls the conversion of fat stores, known as white fat, into brown fat, in which lipids are burned to maintain body temperature and reduce obesity. The study was published Oct. 11 in Nature Communications.

Obesity is a global epidemic, with overweight or obesity affecting an estimated 2200 million people worldwide. The research team led by Guadalupe Sabio analyzed fat tissue samples from obese patients at the University Hospital in Salamanca, and found that these samples contained above-normal levels of the protein MKK6. Detailed analysis of MKK6 function showed that this protein impedes the conversion of fat stores, known as white fat, into brown fat, in which lipids are burned to maintain body temperature.

Brown fat has attracted a lot of interest in recent years among obesity researchers. Body fat is essential for maintaining an appropriate energy balance and regulating body temperature. But not all fat is the same. The body contains two types of fat tissue: white adipose tissue is a store of excess calories, whereas brown adipose tissue is considered a 'good' fat that burns lipids to maintain body temperature. Brown fat can be activated by cold to "generate heat instead of storing fat," explained Sabio. But the most interesting observation is that "white adipose tissue can be converted into brown adipose tissue, thus increasing body temperature." According to Dr. Sabio, this has led to a burgeoning interest in the clinical potential of brown fat, since "activation of this tissue could reduce excess weight." According to Nuria Matesanz, the results of the study indicate that obese individuals lose the ability to activate brown fat or to convert white fat in to brown, and therefore are unable to lose weight via this route.

In addition to the participation of partners at the the University Hospital in Salamanca, the Nature Communications study was conducted in collaboration with the research group led by Dr. José Antonio Enríquez at the CNIC and research teams from the Universidad de Extremadura and the Centro de Investigación en Medicina Molecular y Enfermedades Crónicas (CiMUS) in Santiago de Compostela.

The researchers found that the inability to convert white fat to brown in obese patients is caused by increased amounts of the protein kinase MKK6. Through the use of animal models, the research team was able to demonstrate that MKK6 prevents the conversion white fat into brown. Mice lacking MKK6 have more brown fat; consequently, these mice are protected against obesity and eliminate excess energy as heat.

The research also demonstrated that eliminating MKK6 after mice had become obese stopped the further development of obesity and led to a drop in body weight. These findings all point to the potential of MKK6 as a therapeutic target in the fight against obesity.