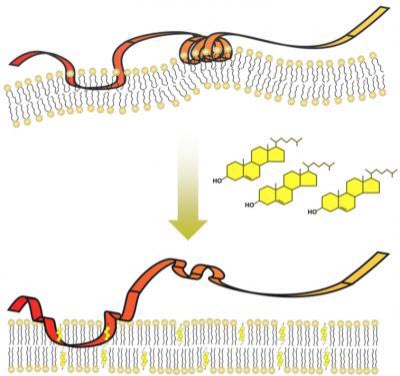 SM is embedded in the membrane of the cell's endoplasmic reticulum (ER), which is composed of fatty molecules including cholesterol. As cholesterol in the cell increases, more and more of it is incorporated into the ER membrane.

Related Article: Researchers Zero in on Cholesterol's Role in Cells

Like all proteins, SM is composed of amino acids, and different sequences of amino acids have different properties. A particular series of twelve amino acids is a "destruction code" that tells the cell's garbage disposal machinery to degrade the SM protein.

Brown's team showed that under typical conditions, the destruction code is hidden by being tucked away inside the endoplasmic reticulum membrane as part of a spring-shaped structure. Using experiments in cell cultures and with isolated proteins and membranes, they also showed that this spring structure could only embed in membranes that contained a low percentage of cholesterol. When the amount of cholesterol making up the membrane increased, the spring popped out, exposing the destruction code.

The researchers speculate that, because the synthesis step carried out by SM is crucial to determining the amount of cholesterol a cell produces, drugs targeting SM could be used to decrease cholesterol as an alternative to the popularly used statins, which target an enzyme earlier in the cholesterol synthesis assembly line. But they also wonder whether the type of cholesterol-responsive spring they discovered might be used by other proteins involved in cholesterol metabolism to sense and adjust cholesterol levels.

"It's perhaps stretching the bow a little too far to make a connection from our little cholesterol spring mechanism to metabolic disorders," Brown said. "But we've found a fundamental cholesterol sensing mechanism, and that's where this work has advanced the field."