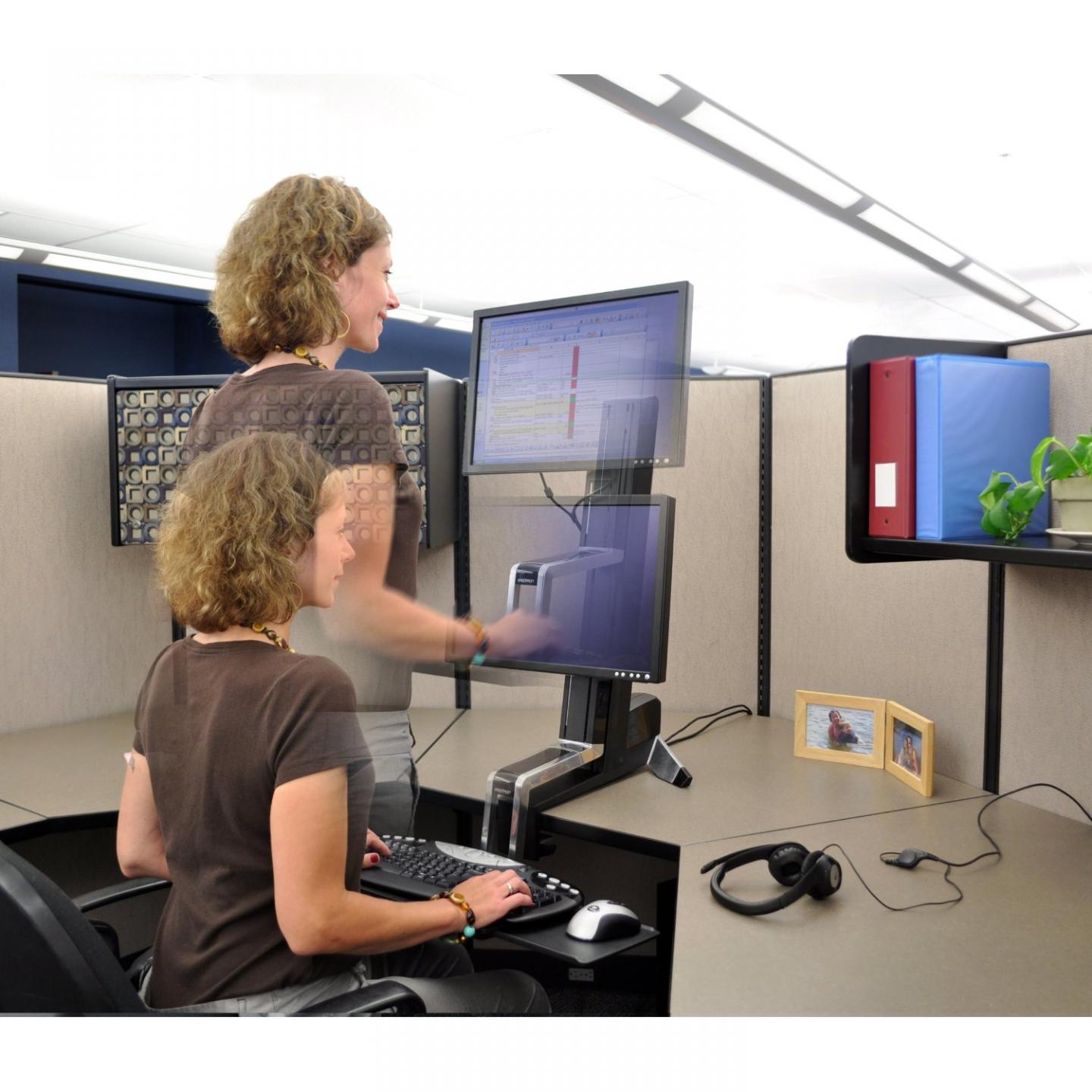 According to a new University of Iowa study, employees with sit-stand desks stood 60 minutes more a day at work compared with their co-workers with sitting desks, and they continued to do so long after their newfangled desks lost their novelty.Image courtesy of UI Department of Health and Human PhysiologyHere's an easy way for office workers to burn a few extra calories and avoid the perils of sitting all day: stand and type.

According to a new University of Iowa study, employees with sit-stand desks stood 60 minutes more a day at work compared to their co-workers with sitting desks, and they continued to do so long after their newfangled desks lost their novelty. Plus, the sit-stand desk users walked an additional six minutes a day at work.

Consequently, the employees with sit-stand desks burned up to 87 more calories a day than their sitting counterparts--a small but significant amount that researchers say could be important in fighting the obesity epidemic in the United States.

"Studies suggest American workers today burn roughly 100 calories-less each day while at work compared to American workers in 1960. This decline in occupational energy expenditure is thought to play a substantial role in the rising obesity epidemic we have observed over that same time period," says Dr. Lucas Carr, an assistant professor in the Department of Health and Human Physiology and member of the Obesity Research and Education Initiative at the UI. "Our findings are important because they support redesigning the traditionally sedentary office environment as a potentially cost-effective approach for fighting the obesity epidemic."

Carr is the corresponding author of the study "Examining the Long-term Use of Sit-stand Desks in a Professional Office Setting," which was published online Oct. 1 by the American Journal of Preventive Medicine.

The cross-sectional study looked at employee activity over a five-day workweek. Participants had their sit-stand desks for an average of 1.8 years prior to the study.

"This study is unique in that we looked at long-term users of these desks whereas previous studies have examined employee's sitting/standing habits immediately after being provided a new sit-stand desk, which is not a true test of whether someone will use the desk over the course of their 20- to 30-year career," Carr says.

Recent studies show sedentary jobs have risen 83 percent since 1960 and now account for 43 percent of all jobs in the United States. The UI study says: "Office workers sit more than 80 percent of the workday, placing them at increased risk for many sedentary-related pathologies."

However, results of the UI study found sit-stand desks could change that by offering "a sustainable approach for reducing sedentary behavior" for office workers whose inactivity puts them at risk for such conditions as cardiovascular disease, high blood pressure, and obesity.

The study involved 69 middle-aged, mostly female employees--31 using sit-stand desks and 38 using sitting desks--in a variety of office jobs including administrative/clerical, statistical/testing, management, marketing, research, and accounting. To measure their physical activity, participants wore a monitor similar to a pedometer around the clock for five work days. The device measured their body positions, movements, and the intensity or pace of their movements.

Though the standing-desk employees burned more calories than those with seated desks, the study found there were no between group differences in cardiometabolic health risk factors such as weight, percent body fat, blood pressure, and heart rate.

However, Carr says more research is needed to examine the impact of replacing sitting with standing on cardiometabolic, musculoskeletal (neck, back, hip discomfort), and cognitive outcomes.

"It is possible that standing for an hour more each day just simply doesn't translate to significant cardiometabolic health risk differences. It might be that it takes several years for standing to provide enough stimulus to see between group differences," Carr says. "It is also possible that this study was too small to detect a difference. The message here is that we need to do more research to determine the true health benefits of replacing sitting with standing."

Carr acknowledges that standing more at work could be important in that it might contribute to a successful weight maintenance, but that standing alone is not likely to cause someone to lose weight.

"Rather, standing at work could be one piece of an individual's larger health plan that also incudes healthy eating and physical activity," he says.