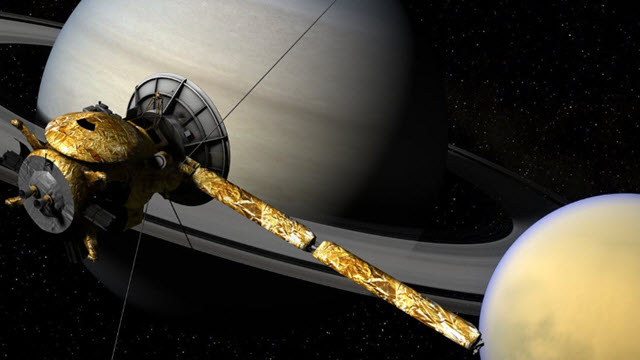 Researchers used data collected from the Cassini mission between 2004 and 2017 to learn more about climate on Titan, Saturn's largest moon.Credit: NASA/Cassini/Kevin Gill

Scientists studying the weather and climate of Titan, Saturn’s largest moon, have reported a significant seasonal variation in its energy budget—that is the amount of solar energy absorbed by the celestial body and the thermal energy it emits.

The findings, reported in the journal Geophysical Research Letters, could lead to new insights about climate on Earth.

Titan is the only body in the solar system, other than Earth, with a significant atmosphere and liquid surface lakes. “By studying Titan, we can learn a lot about Earth,” said Ellen C. Creecy, a doctoral student in the Department of Earth and Atmospheric Sciences at the University of Houston (UH) and first author of the paper.

There are significant differences between the two, as well, she said. The surface liquid on Titan is liquid methane, rather than water, for example. And it takes Saturn and its moons far longer to complete an orbit around the moon.

Liming Li, a physics professor at UH and corresponding author on the paper, said it takes Saturn about 29 Earth years to complete its orbit. Still, he said, learning more about the energy budget of Titan can add to understanding of climate change on Earth.

Related Video: Cassini's Legacy and the Atmospheric Chemistry of Titan

The researchers used data collected from the Cassini mission between 2004 and 2017—the equivalent of about half an Earth year for Saturn and Titan, or portions of three seasons. That data provided the first opportunity to systematically examine the seasonal variations of Titan.

While previous studies have suggested Titan’s energy budget is in balance, the researchers determined that both emitted thermal energy and absorbed solar energy decreased over the 14-year period studied. But thermal emissions dropped less—about 6.8 percent, compared with an 18.6 percent drop in solar energy at Titan. That varied between the northern and southern atmospheres of Titan, as well as depending on the moon’s distance from the sun during its orbit.

The findings suggest the distance between the sun and Earth may play a role in Earth’s energy balance, said Xun Jiang, professor of atmospheric science at UH. She and Li serve as co-doctoral advisors for Creecy, whose future research will be supported by a new $433,210 grant (10/1/2020-9/30/2023) from NASA. Li is principal investigator on that grant.

“Such a mechanism has not been examined for Earth’s energy imbalance,” Jiang said, noting that future work will compare Titan and Earth’s energy budgets in order to better understand the climate systems on each.

In addition to Creecy, Li and Jiang, researchers on the project are C.A. Nixon of the NASA Goddard Space Flight Center and R.A. West and M.E. Kenyon of the Jet Propulsion Laboratory at the California Institute of Technology.

Creecy said additional work will be needed to better understand what the observed energy imbalance means for Titan.

“The possible energy imbalance means that Titan’s atmospheric system keeps evolving,” she said. “There are complicated interaction between the energy budget and atmospheric system, which is being explored by our research.”