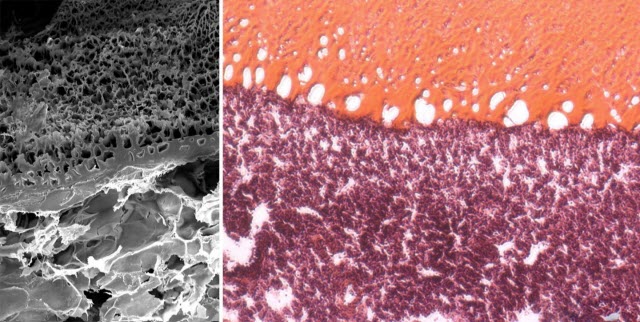 A scanning electron micrograph (on the left) and a histological staining (on the right), both showing how MeTro gel (on top), applied to an injured lung area, bonds, and interlocks with the tissue surface. The elastic tissue is tightly sealed without the need for additional sutures or staples.Image credit: Credit: Wyss Institute at Harvard University

(BOSTON) — To repair ruptured or pierced organs and tissues, surgeons commonly use staples, sutures, and wires to bring and hold the wound edges together so that they can heal. However, these procedures can be difficult to perform in hard-to-reach areas of the body and wounds are often not completely sealed immediately. They also come with the risk that tissues are further damaged and infected. A particular challenge is posed by wounds in fragile or elastic tissues that continuously expand or contract and relax, like the breathing lung, the beating heart, and pulsing arteries.

To remedy some of these problems, biomedical engineers have developed a range of surgical sealants that can bond tissues to stop leakages. Yet, "currently available sealants are not suitable for most surgical applications and they do not work alone without the need for suturing or stapling because they lack an optimal combination of elasticity, tissue adhesion, and strength. Using our expertise in creating materials for regenerative medicine, we aimed to create an actual fix for this problem in a multi-disciplinary effort with clinicians and bioengineers," said Ali Khademhosseini, PhD, associate faculty member at Harvard's Wyss Institute for Biologically Inspired Engineering.

Recently published in Science Translational Medicine, a study performed by a team led by Khademhosseini at the Wyss Institute and Nasim Annabi, PhD, at Northeastern University presents a robust solution for the efficient repair of wounds in mechanically challenging body areas. The team also included researchers from Beth Israel Deaconess Medical Center (BIDMC) in Boston and the University of Sydney in Australia. The researchers demonstrated that a sealant, based on elastin—a human, resilience-imparting protein present in all elastic tissues such as the wall of arteries, skin, and lungs—can be photochemically tuned to effectively seal incisions in arteries and lungs of rats and to repair wounds in the lungs of pigs, all suture and staple-free. Khademhosseini is also a professor at Harvard-MIT's Division of Health Sciences and Technology and Brigham and Women's Hospital and Annabi is assistant professor at the Department of Chemical Engineering at Northeastern University and lecturer at the Harvard-MIT's Division of Health Science and Technology.

In 2013, inspired by the natural abilities and synthesis of elastin fibers, Khademhosseini, Annabi, who at the time was a postdoctoral fellow at the Wyss Institute, and Anthony Weiss, PhD, professor of biochemistry and molecular biotechnology at the University of Sydney's Charles Perkins Centre and Faculty of Science, started to explore the regenerative capabilities of tropoelastin, the precursor protein from which the body derives functional elastin. Essentially mimicking the body's mechanisms, the researchers learned how to produce large amounts of recombinant human tropoelastin in E. coli bacteria and, using a so-called photocrosslinking reagent named methacrylate and a pulse of UV light, they crosslinked different tropoelastin proteins in a solution to create a versatile highly elastic hydrogel they named MeTro. This work showed that MeTro could be used to generate a micro-patterned matrix to which heart cells can adhere, and be grown as tissue constructs for the potential repair of cardiac damages.

For their most recent study, the researchers further teamed up with George Cheng, MD, a pulmonologist and Sidhu Gangadharan, MD, chief of thoracic surgery and interventional pulmonology at BIDMC. "Discussing our earlier findings on MeTro with Sidhu and George, we became aware that lung injuries in particular pose a surgical problem for which there is no convincing solution yet, and started to investigate our materials approach as a sealant for lung and other elastic tissues," said Annabi.

By varying the concentrations of the crosslinking reagent and tropoelastin, the team generated a range of MeTro hydrogels with different elasticities, as well as cohesive and tissue adhesive strengths, and then identified compositions that performed best in animal models with lung and vascular injuries. The idea behind this approach was to find MeTro formulations that would come close to tissues' natural elasticities and strengths and that would bond well to tissue surfaces, even in the presence of fluids like blood, which is a challenge with many other sealants.

These new MeTro gels could seamlessly close incisions in arteries and punctures in lungs of live rats, allowing the animals that otherwise would have succumbed to the procedure to survive. "The beauty of a MeTro formulation is that, as soon as it comes in contact with tissue surfaces, it solidifies into a gel-like phase without running away. We then can further stabilize it by curing it on-site with a short light-mediated crosslinking treatment. This allows the sealant to be very accurately placed and to tightly bond and interlock with structures on the tissue surface," said Annabi.

To translate their findings further toward more human-like lung injuries, the team first tested whether MeTro could also seal incisions in explanted and deflated lungs of pigs. Upon inflation, MeTro was significantly more effective at sealing the leaks under higher pressures than clinically available sealants and sutures. Importantly, this trend held up in in vivo experiments in which MeTro could permanently seal severe pulmonary air and blood leakages, again without applied staples or sutures.

"The potential applications are powerful, from treating serious internal wounds at emergency sites such as following car accidents and in war zones, as well as improving hospital surgeries. We have shown MeTro works in a range of different settings and solves problems other available sealants can't. We're now ready to transfer our research into testing on people. I hope MeTro will soon be used in the clinic, saving human lives," said Weiss.

"In our in vivo studies, MeTro seems to remain stable over the period that wounds need to heal in demanding mechanical conditions and later it degrades without any signs of toxicity; it checks off all the boxes of a highly versatile and efficient surgical sealant with potential also beyond pulmonary and vascular suture and staple-less applications," said Khademhosseini.

"The study is an excellent example of how human biology can be reengineered, tuned in different ways to create a surprisingly broad solution that can be applied back to patients in this case as surgical sealants across different tissues and scales," said Wyss Institute founding director Donald Ingber, MD, PhD, who also is the Judah Folkman Professor of Vascular Biology at HMS and the Vascular Biology Program at Boston Children's Hospital, as well as professor of bioengineering at the Harvard John A. Paulson School of Engineering and Applied Sciences (SEAS).