Feb 11, 2018|5 min readThe Institute of Physical Chemistry of the Polish Academy of Sciences 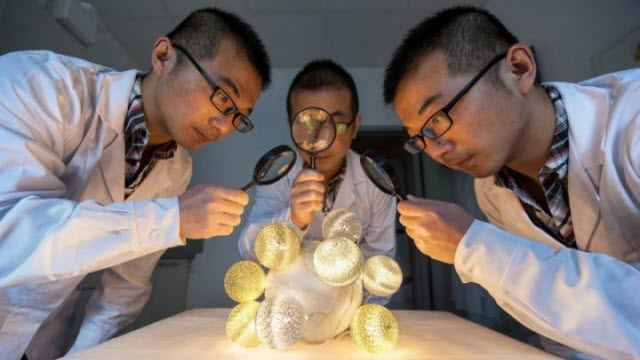 Researchers from the Institute of Physical Chemistry of the Polish Academy of Sciences have demonstrated, using a super resolution microscopic technique, how to follow chemical reactions taking place in very small volumes. The method of analysis developed by the Warsaw physicists in collaboration with PicoQuant GmbH is the first to make it potentially possible to observe reactions not only inside living cells, but even within individual organelles, such as cell nuclei.

The chemical mechanisms responsible for the cell's vital functions still conceal many secrets. There is no surprise in this: only recently have we had the tools to directly look at the chemical phenomena occurring in living cells. However, due to continuing technical limitations, to this day we do not have, for example, such basic knowledge as that about the equilibrium constant values of chemical reactions in cells. In other words, we still do not know how much of a chemical involved in a given reaction in the cell is in an already reacted form and how much is in an unreacted form. The hitherto adversities have been overcome by a group of researchers from the Institute of Physical Chemistry of the Polish Academy of Sciences (IPC PAS) in Warsaw. In collaboration with the Berlin-based company PicoQuant GmbH, they have developed and demonstrated a modification of one of the most modern microscopic techniques: super resolution fluorescence correlation spectroscopy.

"We have been dealing with chemical reactions in cells for a long time. For example, in 2013, we determined the diffusion coefficients of all the proteins in the Escherichia coli bacterium, thanks to which it became possible to determine the rate of reactions taking place with their participation. Here we were interested in a similar issue, but with regard to the situation when we have low concentrations of reagents," says Prof. Robert Holyst (IPC PAS) and continues: "Biological reactions are generally reversible and, where they occur, a certain dynamic equilibrium is usually created between the amount of reacted and unreacted substances. In our attempts to determine the equilibrium constants for various reactions in cells, we looked to super resolution fluorescence correlation spectroscopy. And here we came across an interesting technical problem whose solution opened up new possibilities for us in the study of the chemistry of life."

There are many varieties of microscopy, including those with such phenomenal resolutions that it is possible to see individual atoms. However, when observing cells, optical microscopy remains unbeatable due to its low invasiveness and the ability to visualize the spatial structure of living organisms. For a long time, its basic disadvantage was its relatively poor resolution: fundamental physical constraints (diffraction) make it impossible to distinguish details smaller than about 200 nanometres by standard optical techniques.

One type of optical microscopy is fluorescence microscopy. It involves introducing a fluorescent dye into the sites of the biological sample being studied, and then scanning the sample with a focused laser beam. The dye molecules that are in the focus are stimulated to glow. In 1994, Stefan W. Hell presented a method of exceeding the diffraction limit in fluorescence microscopy by means of STIMulated Emission Depletion (STED). STED requires an additional laser beam, resembling a doughnut in cross-section. Properly used, this beam extinguishes the external areas of the main focus of the laser beam and consequently reduces its size to values below the diffraction limit. With super resolution methods it is now possible to see spatial details of only 10 nm with a time resolution of up to microseconds.

A relatively young branch of optical microscopy is Fluorescence Correlation Spectroscopy (FCS), used to study motion of molecules. In super resolution varieties, the focus of the laser has a volume measured in tens of attoliters (one attoliter is a billionth of a billionth of a liter). The measurement involves measuring the light emitted by a fluorescent dye attached to the tested molecule, excited by a laser beam. Knowing the size of the focus and the duration of fluorescence, and with the assistance of the appropriate theoretical models, it is possible to quite accurately determine the velocity of even individual molecules. 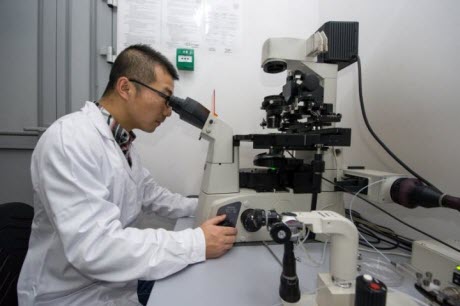 At the Institute of Physical Chemistry of the Polish Academy of Sciences in Warsaw, it was shown how to observe the course of chemical reactions in extremely small volumes, comparable to the size of cell nuclei, by means of super resolution fluorescence correlation microscopy. In the picture, doctoral student Xuzhu Zhang works in the laboratory.Photo credit: IPC PAS, Grzegorz Krzyzewski"For some time it has been known that while super resolution FCS microscopy works well when observing molecules moving in two dimensions, e.g. in lipid membranes, it fails in observations in volumes. Diffusion times, determined on the basis of measurements in 3D, could differ from the predictions from measurements in 2D by an order of magnitude or even more. After a few months of research it became clear to us that for these discrepancies were due to the excessively simplified manner of determining the spatial size of the focus," says Dr. Krzysztof Sozanski (IPC PAS).

On the basis of their own theoretical analyses and experiences, the Warsaw researchers, funded by MAESTRO grant from the Polish National Science Centre and ERA Chairs grant from the European Horizon 2020 programme, constructed a new, universal theoretical model introducing a correction of the spatial shape of the focus and taking into account its impact on the measured signal-to-noise ratio. The correctness of the model was initially verified in measurements of the diffusion rate of various fluorescent probes in solutions.

"We also carried out more advanced experiments. For example, we studied a reversible reaction in which the dye molecules attached themselves to micelles and then detached themselves after some time. The system, composed of relatively large balls of surfactant molecules reacting with the molecules of dye, reflected conditions characteristic of biological structures," says PhD student Xuzhu Zhang (IPC PAS). The measurements were not simple. If the molecules of both reactants were moving slowly, when passing through the focus the dye could repeatedly merge/disconnect with/from the micelles and the emitted light would be averaged. But there could also be a variant of the other extreme: the connection and disconnection reactions could run so slowly that during the transition through the focus there would be no change in the relationship between the reagents—then there would be no averaging. "Our model takes into consideration not only both of the extreme cases, but also all the intermediate ones. And with the knowledge at our disposal about the actual size of the focus, we are able to change its size and experimentally examine all the cases required by the model both in the same chemical system and on the same equipment," emphasizes Zhang.

An important feature of the analytical method developed at the IPC PAS is the fact that no changes in apparatus are needed for its application. After appropriate adaptation, the method can be used to more accurately interpret data recorded by FCS-ready STED microscopes already in production.