Ten years after producing the first sample of the now widely studied family of nanomaterials, called MXenes, Drexel University researchers have discovered a different way to make the atom-thin material that presents a number of new opportunities for using it. The new discovery removes water from the MXene-making process, which means the materials can be used in applications in which water is a contaminant or hampers performance, such as battery electrodes and next-generation solar cells.

The discovery, which was reported recently in the journal Chem, offers a new recipe for the chemical etching solution that carves away layers from a ceramic precursor material, called MAX phase, to create the two-dimensional layered material, MXene.

"Water has been used in the MXene-making processes to dilute the etching acid and as a solvent to neutralize the reaction, but it is not always desirable to have traces of it in the finished product," said Michel Barsoum, PhD, Distinguished professor in Drexel's College of Engineering. "We have been working for some time to explore other etchants for the MAX P-phase and now we have found just the right combination of chemicals to do it."

Typically, they are produced by using a concentrated acid, to carve away atomic layers from a MAX phase material, then washed with water—leaving flakes of the 2D layered material that can be pressed into thin films for microchips and battery electrodes, or used to spray paint antennas and coat devices to block electromagnetic interference. 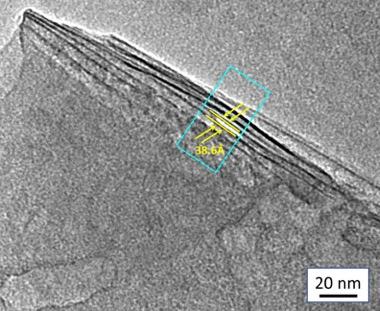 Drexel University researchers have developed a way to produce the promising 2D nanomaterials, MXenes, without using water. This allows the materials to be used for applications like energy storage and solar cells, where the presence of water could degrade performance.
Drexel University

The process reported by Barsoum and his colleagues uses an organic solvent and ammonium dihydrogen fluoride—a chemical commonly used to etch glass—to etch the MAX phase. This solution does the etching, in part because it breaks down into hydrofluoric acid, but it does not require water to dilute it or to wash away the by-products of the etching process.

Making MXenes in this way alters their interior chemical structure in a way that makes them better suited for use in some types of batteries and solar cells - where water could slow the chemical reactions that store and/or convert energy, or in some cases even cause corrosion.

"MXenes have shown tremendous potential for improving energy storage devices, but this discovery makes them even more promising," said Varun Natu, a doctoral researcher in Drexel's College of Engineering and first author of the paper. "It is known that even slight presence of water in lithium or sodium ion batteries using organic electrolytes, can be detrimental to their performance. In this work we show that MXene films synthesized in propylene carbonate—when tested as anodes in a sodium ion battery—exhibit nearly double the capacity of the same composition etched in water. In addition, MXenes can now easily be integrated with materials which degrade in water, like certain polymers, quantum dots, and perovskites."

In addition to better equipping MXenes for these applications, and others yet to be explored, the new process also allows the etching solution to be recovered and reused. This could prove valuable as researchers and companies look into the most efficient way to scale up the production process.

Researchers involved with this work, including Vibha Kalra, PhD, an associate professor in the College of Engineering, have been exploring ways to improve battery performance and safety by developing new types of electrodes. This discovery could bring new options to bear in these efforts, as well as growing Drexel's body of MXene research.

"This finding opens up a huge new field of research: Non-aqueous etching of MXenes. We believe that this work will prove useful not only to the MXene community, but also to researchers throughout the field material science," Barsoum said.

- This press release was originally published on the Drexel Now website