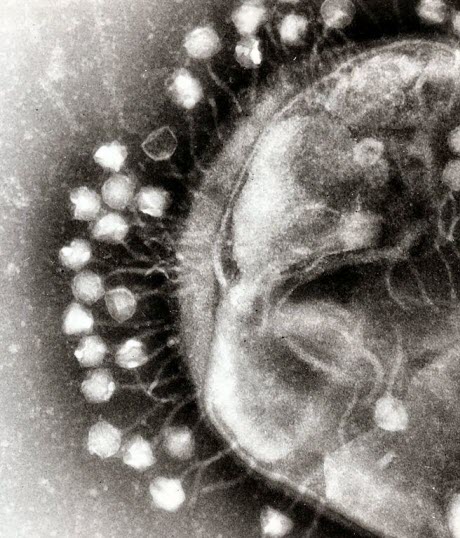 Bacteriophages infect a bacterial cell.Image credit: Dr. Graham BeardsBacteriophages, known informally as phages, are viruses that can attack and kill specific bacteria. They occur everywhere in the natural world. Precisely because they are matched to just one specific type of bacteria, researchers and medics hope that phages can be engineered to combat certain bacterial infections. For example, the food industry is already using these phages to destroy pathogens in food products by natural methods.

However, genetically engineering phages in order to customize them for specific applications continues to be a very challenging and time-consuming process. It is particularly difficult to modify phages to combat Gram-positive bacteria such as Staphylococcus. Incorporating a synthetic phage genome into Gram-positive bacteria has so far been very problematic, as their cell walls are so thick.

A new era may now be dawning in the use of bacteriophages, however, as a team of researchers led by Martin Loessner, professor of food microbiology at ETH Zurich, has just presented a novel technology platform in a paper published in the journal PNAS. This enables scientists to genetically modify phage genomes systematically, provide them with additional functionality, and finally reactivate them in a bacterial "surrogate" —a cell-wall deficient Listeria cell, or L-form.

The new phage workbench allows such viruses to be created very quickly and the "toolbox" is extremely modular: it allows the scientists to create almost any bacteriophages for different purposes, with a great variety of functions.

"Previously it was almost impossible to modify the genome of a bacteriophage," Loessner says. On top of that, the methods were very inefficient. For example, a gene was only integrated into an existing genome in a tiny fraction of the phages. Isolating the modified phage was therefore often like searching for a needle in a haystack.

"In the past we had to screen millions of phages and select those with the desired characteristics. Now we are able to create these viruses from scratch, test them within a reasonable period and if necessary modify them again," Loessner stresses.

Planning phages on the computer

Samuel Kilcher, a specialist in molecular virology, has played a key role in the breakthrough: he used synthetic biology methods to plan the genome of a bacteriophage on the drawing board and assemble it in a test tube from DNA fragments. At the same time new, additional functions were incorporated in the phage genome, such as enzymes to dissolve the bacterial cell wall. In addition, Kilcher is able to remove genes that give a phage unwanted properties, such as the integration into the bacterial genome or the production of cytotoxins.

In order to reactivate a phage from synthetic DNA, the genome was introduced into spherical, cell wall-deficient but viable forms of the Listeria bacterium (L-form Listeria). Based on the genetic blueprint, these bacterial cells then produce all the components of the desired phage and ensure that the virus particles are assembled correctly.

The researchers also discovered that spherical Listeria cells are not only capable of creating their own specific phages, but also those able to attack other bacteria. Usually, a host only generates its own specific viruses. L-form Listeria are therefore suitable as a virtually universal incubator for bacteriophages.

If the Listeria cells are then brought to the point where they rupture (lysis), the bacteriophages are released and can be isolated and multiplied for use in therapy or diagnostics.

Only virulent phages are suitable

"A key prerequisite for using effective synthetic bacteriophages is that their genome is unable to integrate into the host's genome," Kilcher emphasises. If this happens, the virus no longer presents a threat to the bacterium. Using this new method, however, the scientists were able to simply reprogram such integrative phages so that they become interesting again for antibacterial applications.

The two researchers are not particularly worried about potential resistances against the phages. And even if there were any, for example due to a bacterium changing its surface structures to prevent the virus from attaching, the new technology makes it possible to develop a suitable phage against which a bacterium has not yet developed resistance.

The researchers also think the danger of unintended release is very small: because the bacteriophages—both natural and synthetic—are extremely host-specific, they cannot survive for long without their host. This high specificity also prevents the bacteriophages from switching to a new host bacterium. "Adapting to the surface structure of a different host would take an awful long time in nature," Loessner says.

Close to a practical application

With this new technology, Loessner's team has made a giant stride towards applying synthetic bacteriophages for use in therapy, diagnostics, or the food industry. The scientists are thus managing to overcome constraints associated with the use of naturally occurring phages. "Our toolbox could help to exploit the potential of phages," Loessner says. The researchers have applied for a patent for their technology. Now they hope to find licensees to produce the phages for therapy and diagnostics.