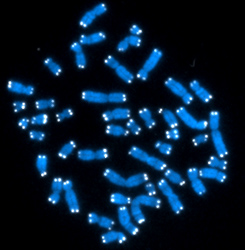 Telomeres glow white at the ends of DNA.Image Credit: National Institutes of HealthResearch led by Johns Hopkins physicians and scientists shows that a test for measuring the length of DNA endcaps, called telomeres, which has a variability rate of five percent, can alter treatment decisions for patients with certain types of bone marrow failure.

In a report published in the Feb. 20 issue of Proceedings of the National Academy of Sciences, the researchers found that telomere length testing results also could help identify people who are at increased risk for developing diseases associated with short telomeres.

A group of heritable diseases, which commonly manifest as lung scarring called pulmonary fibrosis or bone marrow failure, are marked by very short telomeres, according to Mary Armanios, MD, professor of oncology at the Johns Hopkins Kimmel Cancer Center and clinical director of the Telomere Center at Johns Hopkins.

At least 5,000–10,000 Americans have disorders related to short telomeres, according to Armanios. “These diseases affect as many people as certain types of leukemia, and we think the prevalence may be higher than current estimates,” she adds.

“Our goal was to establish a clinically reliable tool for telomere length measurement in a hospital setting and make it available to physicians and their patients for precise diagnosis and treatment recommendations,” says Armanios.

Telomeres protect the ends of DNA like the plastic tubes on the ends of shoelaces, and they normally shorten with aging. Made up of repetitive sequences of DNA, normal telomeres have enough length to withstand the erosion that occurs over the normal lifespan of a cell. Cells with very short telomeres may blow through these endcaps more quickly and this can lead to specific diseases. In addition to pulmonary fibrosis and bone marrow failure, people with short telomeres are prone to developing emphysema, liver disease, myelodysplastic syndrome, and other cancers.

“Typical clinical findings and current tests are not likely to identify most patients with very short telomeres,” says Armanios, “so, there is a need for molecular tests to diagnose this condition, especially since these patients in hospital or clinical settings are more susceptible to side effects of routine medications and procedures.”

The “flow-FISH” test, which stands for flow cytometry and fluorescence in situ hybridization, specifically measures the telomere length in each cell within a patient’s blood sample. The test was developed in 2006 by Canadian researcher Peter Lansdorp, MD, PhD. In flowFISH, scientists poke very tiny holes in the nucleus of each cell and slip in fluorescently labeled DNA that attach to telomeres. Then, scientists use a method called flow cytometry to identify the types of cells in each blood sample and quantify the fluorescent signal in cells one at a time.

For the current study, Armanios worked with Jonathan Alder, PhD, formerly of Johns Hopkins and now at the University of Pittsburgh, and other colleagues at Johns Hopkins to use the flowFISH test to determine a range for normal telomere length among 192 healthy people. All subjects were recruited from The Johns Hopkins Hospital. This control group included blood samples taken from newborns up to people aged 82.

The Johns Hopkins team compared the Baltimore-based data with values published by researchers in Vancouver, Canada, who also used the flowFISH test to measure telomere lengths in 444 healthy people.

Both the Baltimore and Vancouver groups had similar values, within five percent of each other. Moreover, the ranges of normal telomere length, which is between eight and 13 kilobases of DNA at birth, were also similar.

“We think this rate of reproducibility and accuracy for a telomere length measurement tool is ideal for a clinical setting,” Armanios notes.

Then the researchers measured telomere length in 100 people from 60 families who are known to carry mutations in genes linked to telomeres and their associated enzyme, telomerase. Among them, 73 had symptoms of diseases associated with short telomeres, and 27 had no symptoms. Of the 73, the 21 with bone marrow failure were, on average, three decades younger than the 41 who had pulmonary fibrosis or emphysema. Among this group of patients, those with the shortest telomeres tended to develop disease symptoms at a younger age—in their childhood and teens—than those with milder telomere defects.

In addition, among 38 children and adult patients with bone marrow failure due to an unknown cause who were seen at The Johns Hopkins Hospital between 2012 and 2014, Armanios’ team used flowFISH to find that 10 of them had very short telomeres. In nine of those patients, physicians decided to change their treatment to less harsh therapies, including bone marrow transplants with reduced doses of chemotherapy, less use of immunosuppressant drugs or transplant donor screening for defects in telomere-related genes.

“Telomere measurement needs to be precise and reproducible, but even more important is how this information can be used to guide treatment decisions,” says Carol Greider, PhD, the Daniel Nathans Professor and director of the Department of Molecular Biology and Genetics at Johns Hopkins. Greider discovered telomerase, the enzyme that controls telomere lengthening, in 1984 and shared the 2009 Nobel Prize for Physiology or Medicine with Elizabeth Blackburn and Jack W. Szostak for the finding.

Armanios believes that patients with certain forms of unexplained low blood counts should have a flowFISH test to help their physicians decide the best course of treatment.

Recently, some companies have marketed a different type of telomere length test to the public with the idea that a person’s telomere length can predict their biologic “age.”

These over-the-counter telomere length tests use a tool called quantitative polymerase chain reaction (qPCR). The method pools the cells in a patient’s blood sample, extracts their DNA, amplifies the DNA, and measures the amount of repetitive DNA sequences found within the DNA pool.

Armanios’ research, as well as other groups’, has demonstrated that qPCR testing of telomere length carries a variability rate of up to 20 percent depending on the day the test is performed and from lab to lab.

Armanios believes that such over-the-counter telomere tests do not give people accurate or actionable information. “Within the normal telomere length range, it is not possible to determine a person’s exact biologic age, nor is it a good marker of a person’s ‘youthfulness,’” she adds. “In addition, the idea that very long telomeres are better for your health may not be true. Evidence suggests that such lengthy telomeres may be associated with greater cancer risk.”

The qPCR test costs about $100 to process one blood sample, compared with $400 for flowFISH.

According to Armanios, Johns Hopkins is believed to be the only U.S. hospital to offer flowFISH telomere length testing.