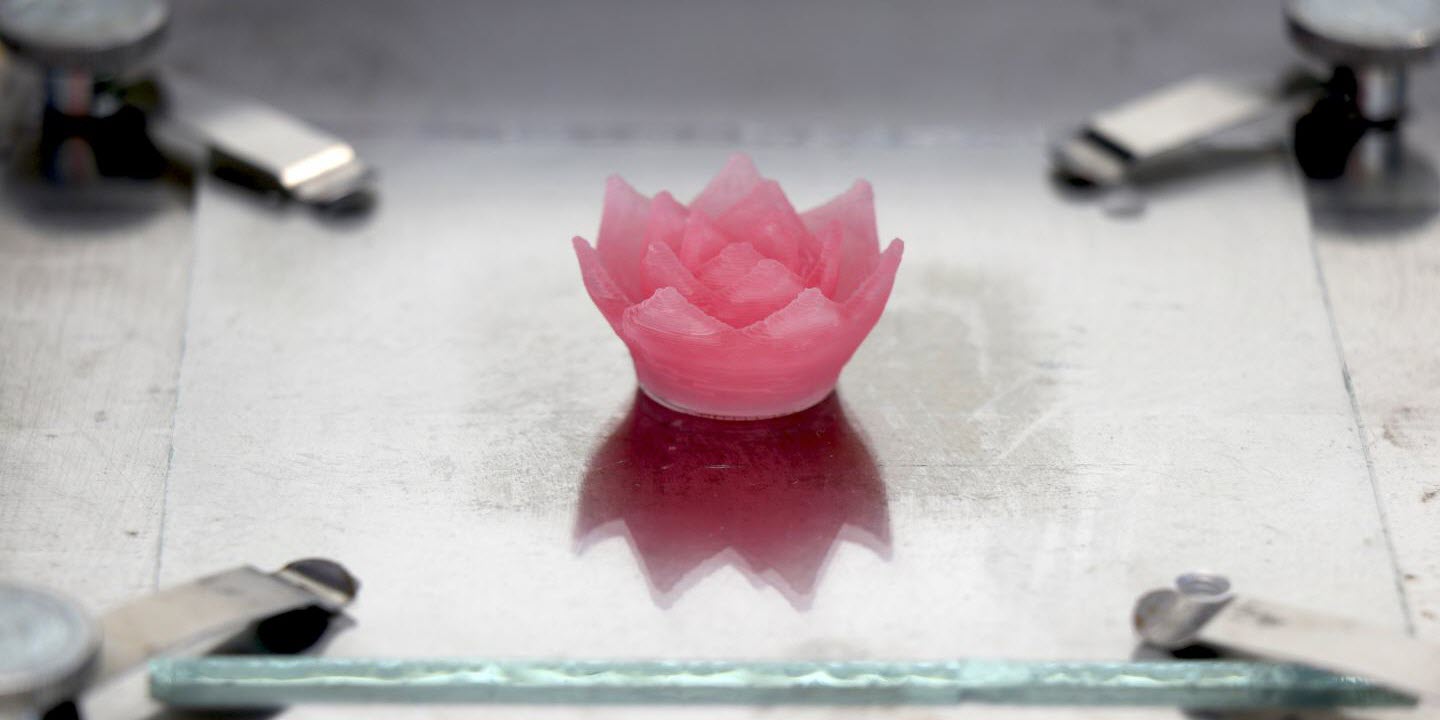 To demonstrate that fine aerogel structures can be produced in 3D printing, the researchers printed a lotus flower made of aerogel.
Empa

Behind the simple headline "Additive manufacturing of silica aerogels" of an article published on July 20th in Nature, a groundbreaking development is hidden. Silica aerogels are light, porous foams that provide excellent thermal insulation. In practice, they are also known for their brittle behavior, which is why they are usually reinforced with fibers or with organic or biopolymers for large-scale applications. Due to their brittle fracture behavior, it is also not possible to saw or mill small pieces out of a larger aerogel block. Directly solidifying the gel in miniaturized molds is also not reliable, which results in high scrap rates. This is why aerogels have hardly been usable for small-scale applications.

An Empa team led by Shanyu Zhao, Gilberto Siqueira, Wim Malfait, and Matthias Koebel have now succeeded in producing stable, well-shaped microstructures from silica aerogel by using a 3D printer. The printed structures can be as thin as a tenth of a millimeter. The thermal conductivity of the silica aerogel is just under 16 mW/(m*K)—only half that of polystyrene and even significantly less than that of a non-moving layer of air, 26 mW/(m*K). At the same time, the novel printed silica aerogel has even better mechanical properties and can even be drilled and milled. This opens up completely new possibilities for the post-processing of 3D printed aerogel moldings.

With the method, for which a patent application has now been filed, it is possible to precisely adjust the flow and solidification properties of the silica ink from which the aerogel is later produced, so that both self-supporting structures and wafer-thin membranes can be printed. As an example of overhanging structures, the researchers printed the leaves and blossoms of a lotus flower. The test object floats on the water surface due to the hydrophobic properties and low density of the silica aerogel—just like its natural model. The new technology also makes it possible for the first time to print complex 3D multi-material microstructures.

Insulation materials for microtechnology and medicine

With such structures, it is now comparatively trivial to thermally insulate even the smallest electronic components from each other. The researchers were able to demonstrate the thermal shielding of a temperature-sensitive component and the thermal management of a local "hot spot" in an impressive way. Another possible application is the shielding of heat sources inside medical implants, which should not exceed a surface temperature of 37 degrees in order to protect body tissue. 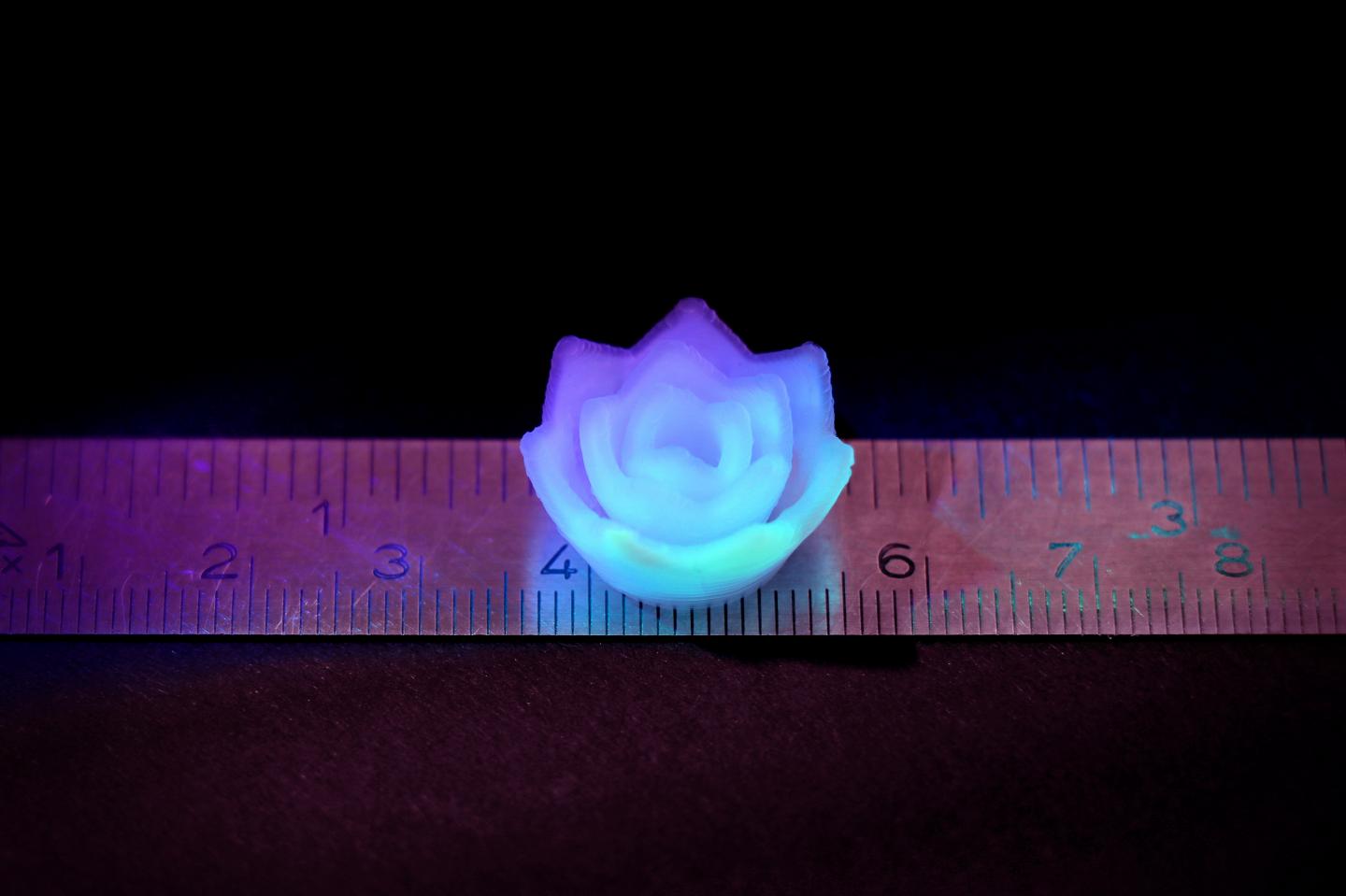 A lotus flower made of aerogel.
Empa

3D printing allows multilayer/multi-material combinations to be produced much more reliably and reproducibly. Novel aerogel fine structures become feasible and open up new technical solutions, as a second application example shows: Using a printed aerogel membrane, the researchers constructed a "thermo-molecular" gas pump. This permeation pump manages without any moving parts at all and is also known to the technical community as a Knudsen pump, named after the Danish physicist Martin Knudsen. The principle of operation is based on the restricted gas transport in a network of nanoscale pores or one-dimensional channels of which the walls are hot at one end and cold at the other. The team built such a pump from aerogel, which was doped on one side with black manganese oxide nanoparticles. When this pump is placed under a light source, it becomes warm on the dark side and starts to pump gases or solvent vapors.

These applications show the possibilities of 3D printing in an impressive way: 3D printing turns the high-performance material aerogel into a construction material for functional membranes that can be quickly modified to suit a wide range of applications. The Knudsen pump, which is driven solely by sunlight, can do more than just pump: If the air is contaminated with a pollutant or an environmental toxin such as the solvent toluene, the air can circulate through the membrane several times and the pollutant is chemically broken down by a reaction catalyzed by the manganese oxide nanoparticles. Such sun-powered, autocatalytic solutions are particularly appealing in the field of air analysis and purification on a very small scale because of their simplicity and durability.

- This press release was originally published on the Empa website