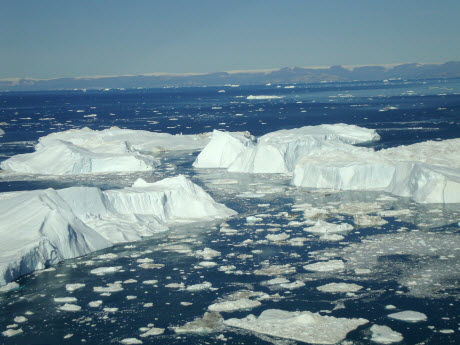 Jakobshavn, one of Greenland's most famous glaciers.Photo Credit: Beata CsathoBUFFALO, N.Y. — The climate accord reached in Paris this month aims to cut planet-warming emissions worldwide with the goal of averting the most disastrous effects of climate change.

But even if the deal’s ambitious targets are met, there will still be a lot of uncertainty about how global warming could affect some of the world’s most vulnerable populations: island nations and other coastal communities.

That’s because scientists still have a lot of questions about how much—and how quickly—sea levels will rise in coming years, says University at Buffalo geologist Beata Csatho, PhD, an expert on the Greenland Ice Sheet. More research needs to be done, she says, before we can understand how global warming could affect people who live in areas impacted by rising oceans.

New insights this week in Nature

Csatho is an expert on the Greenland Ice Sheet, the second largest block of ice on Earth. If this northern giant melted completely, oceans could rise an estimated 20 feet, inundating seaside cities around the globe. 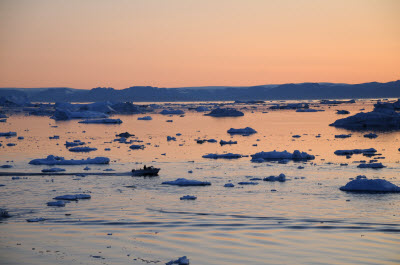 Icebergs in Ilulisat, Greenland.Photo Credit: Beata CsathoSmaller amounts of ice loss could still have serious consequences, but major gaps remain in our understanding of how the ice sheet will respond to a warming world.

This week in the journal Nature, Csatho writes a “News and Views” analysis that comments on the latest research in this area: A new study in Nature by Kristian K. Kjeldsen, Niels J. Korsgaard, Kurt H. Kjær and colleagues, who used aerial photographs, remote-sensing observations and geological evidence to estimate the Greenland Ice Sheet’s mass loss during three time periods since the start of the 20th century: 1900-83, 1983 to 2003 and 2003-10.

Kjær, Kjeldsen and Korsgaard’s team shows that the ice sheet “contributed substantially to sea level rise throughout the 20th century, providing at least 25 ± 9.4 millimeters of the total global mean rise,” writes Csatho, an associate professor of geology in UB’s College of Arts and Sciences, in her News and Views analysis. “Furthermore, rates of mass loss during 2003–10 were twice those during the 20th century, mostly because of increasing water run-off from the surface.”

Studies of this kind, which explore the ice sheet’s past behavior, are critical to developing better predictions of how it will evolve in the future, Csatho says.

Though scientists are making progress on understanding the Greenland Ice Sheet, large gaps in knowledge remain.

In December 2014, for example, Csatho and colleagues published a study revealing that glaciers undergo patterns of thinning and thickening that current models of ice loss and sea level rise fail to address. The project used satellite and aerial data from NASA to reconstruct how the height of the Greenland Ice Sheet changed at nearly 100,000 locations from 1993 to 2012. 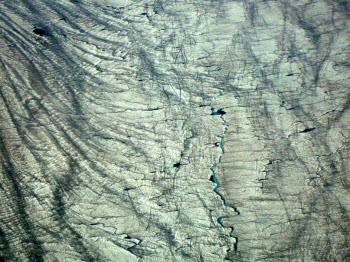 The surface of the Greenland Ice Sheet.Image Credit: Beata CsathoChanges prior to the 1990s are more difficult to determine due to a lack of remote sensing observations via satellite and high-altitude aircraft before that time.

But research is possible, Csatho says. Kjær, Kjeldsen and Korsgaard’s team relied, in part, on decades-old aerial photography of Greenland. As Csatho explains in her News and Views piece, the scientists reprocessed the old snapshots using modern photogrammetric methods, enabling the team to tease out details that provided insight on the ice sheet’s historical boundaries.

Similarly, in a study published in 2008, Csatho and colleagues combined historical photos with other data to analyze the 20th-century history of Jakobshavn Isbrae, a fast-shrinking Greenland glacier.

She concludes her News and Views piece with a call for more research.

A wealth of historical imagery exists for Greenland, and scientists could use this data to develop even more detailed histories of the ice sheet, and to determine whether the Greenland Ice Sheet was at equilibrium—not losing or gaining mass—in recent times. If it was, what were the conditions, including temperature, under which this state was achieved?

“Once the timing of equilibrium conditions for the Greenland Ice Sheet is verified, a detailed reconstruction for that period could serve as a steady-state ice sheet surface for initializing ice sheet models,” Csatho writes in the News and Views article. “Establishing such a steady-state surface is a prerequisite for deriving projections of future ice sheet evolution that are more credible than currently available projections.”