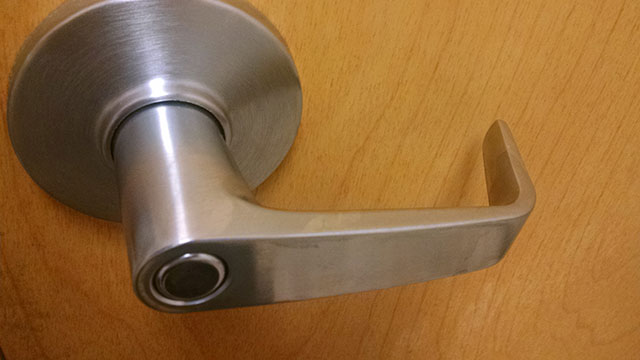 During the course of the study, 400 toilet door handles in 136 airports in 59 countries were sampled.

Münster — Airports are international travel hubs visited by large numbers of people. London Heathrow, for example, has an average of 205,400 travelers every day and saw 75 million people arriving and departing from all over the world in 2015. A study just published in the journal Clinical Microbiology and Infection suggest that international travelers can acquire antimicrobial-resistant bacteria and may spread these bacteria in their home countries after returning from abroad

It seems plausible that drug-resistant bacteria from an individual traveler could be transferred to inanimate surfaces and then picked up by others but studying and quantifying this is fraught with problems. A group of researchers led by Frieder Schaumburg from the University Hospital Münster, Germany, came with an ingenious approach.[1]

Every time a member of their research group traveled internationally and passed through an airport, they swabbed the surface of an internal airport toilet door, preserving the swab for later culture when they returned to the lab.

The study demonstrates that travel through airports does have the potential to introduce antibiotic-resistant bacteria onto surfaces that could pose a public health risk. However, as the authors point out, the study does have many limitations, not least the small sample numbers, the time delay between sampling and culture as well as the lack of information about the type of door handle and the cleaning protocols in use at each facility.

Lead author Schaumburg notes that “the ST672-MRSA-V (PVL-negative) is an emerging community-associated MRSA clone from the Indian subcontinent and has been very rarely reported elsewhere. Although our finding suggests that the MRSA was imported to France from the Indian sub-continent, scientists, politicians, stakeholders and opinion-leaders should not play the blame game. Almost every geographic region has its problems with antimicrobial resistance, which are not limited to MRSA but also includes vancomycin-resistant enterococci, carbapenem-resistant Acinetobacter or Enterobacteriaceae or so-called extended-spectrum beta-lactamase producers. These challenges are not restricted to industrialized regions. A joint strategy that brings together low, middle and high income countries is probably the most important aspect in the fight against antimicrobial resistance.”

During the course of the study, 400 toilet door handles in 136 airports in 59 countries were sampled in this way. 60 percent of the samples were taken in the men’s room with 40 percent in the women’s toilets and, on average, the time between sampling and culture in the lab was seven days. Samples were taken in the airport of arrival (80.75%) a stop-off point (2.75%), or the destination (16.5%) and the results make fascinating reading.

The vast majority of the bacteria cultured from the swabs were Staphylococcus aureus, which were present in 5.5 percent of the samples. Staphylococcus maltophilia was found in 2 percent and bacteria of the Acinetobacter baumannii complex were found in 1.3 percent. The other bacteria isolated were mainly enterococci and other Gram-negative rod bacteria, bugs that are common signs of faecal contamination.

Importantly, other pathogens of major concern, including Pseudomonas aeroginosa, Enterococcus species resistant to the antibiotic vancomycin (VRE) or extended-spectrum beta-lactamase (ESBL)-producing Enterobacteriaceae were not detected, the researchers wrote in their paper.

The bacteria that were isolated were then subjected to further study to find out if they were resistant to antibiotics.

- 2/8 of the S. maltophilia isolates were resistant to trimethoprim and sulfamethoxazole.

- 2/5 of the A. baumannii complex isolates were resistant to trimethoprim and sulfamethoxazole but all were susceptible to quinolones and gentamicin.

- One isolate of S. aureus showed multiple resistance to antibiotics, so was classed as MRSA (mecA-positive, ST672, t1451, SCCmec type V, PVL-negative). This was isolated from a toilet door in a Paris airport and was resistant to aminoglycosides, quinolones, macrolides, clindamycin and trimethoprim/sulfamethoxazole, but was susceptible to glycopeptides, linezolid and rifampicin.