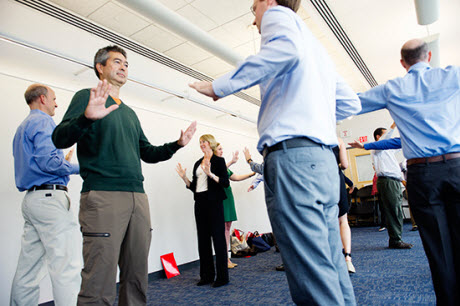 Nathan Philips, a CAS professor of earth and environment (second from left), participates in an improv exercise called “mirror,” designed to teach scientists how to interpret the needs of others.Photos credit: Jackie RicciardiAnyone who peeked into a ninth floor room at the Photonics Center last Friday would have seen a curious sight: 14 staid scientists, standing in pairs, silently mirroring each other’s movements, like well-dressed practitioners of rudimentary tai chi. Gloria Waters, Boston University vice president and associate provost for research, crossed and uncrossed her arms slowly above her head, as Tyler Perrachione, a Sargent College assistant professor of speech, language, and hearing sciences, followed her motions, brow furrowed in concentration. Other distinguished scientists—including Ronald Corley, director of the National Emerging Infectious Diseases Laboratories (NEIDL) and a School of Medicine professor and chair of microbiology, Michael Hasselmo, a College of Arts & Sciences professor of psychological and brain sciences, and Elke Mühlberger, a MED associate professor of microbiology and NEIDL researcher—waved arms, balanced on one leg, and twirled in circles, as their partners tried to duplicate their moves.

The improv exercise, called “mirror,” designed to teach scientists how to understand and interpret the needs of others, was part of a daylong science communication workshop presented by the Alan Alda Center for Communicating Science. The Alda Center, established by actor Alan Alda in 2009 at Stony Brook University, trains scientists and health professionals to communicate more effectively with the public, policy makers, and the media. The workshop, cosponsored by Waters and BU Marketing & Communications, invited 40 scientists from the Charles River and the Medical Campus to learn how to communicate research to a sometimes uninterested—or even hostile—public with clarity, passion, empathy, and enthusiasm.

“It’s really important for scientists to be able to communicate with laypeople, especially given the current funding climate. It’s incumbent upon us to explain why our work is important,” said Waters during a break between the “zip-zap-zop” and “time traveler” improv exercises. “These exercises are really interesting,” she added. “We researchers are used to teaching in a really didactic way. It’s surprising to learn skills this way.”

“I really need this,” said Ian Sue Wing, a CAS professor of earth and environment. “I have a hard time making my work seem interesting to regular people.” When prompted that his work—which focuses on CO2 emissions and their relationship to global warming—may actually be quite interesting to the general public, he sighed and said, “I’m not so sure.”

The workshop, which included group discussions and pitch sessions as well as improv, began with presentations showing scientists how the public perceives their work. A sobering moment came when attendees watched a short video of man-on-the-street interviews. When asked questions like: “What is physics?” “What is basic research?” or “What is nanotechnology?” many people in the video could not answer. When the interviewer asked one young woman, “Where is DNA located?” she answered, “In your hair?”

The scientists’ reactions ran from surprise to dismay.

“Those poor people,” said one scientist.

“Poor us,” added another.

“It was very disappointing,” piped a scientist from the back of the room. “It points to the challenges we face.”

Next, virologist John Connor attempted to explain his work on Ebola to a group of four nonscientists. After his listeners tried, unsuccessfully, to decipher a dense abstract from one of his papers, Connor, a MED associate professor of microbiology and a NEIDL researcher, stepped in and talked directly to the puzzled laypeople: “Have any of you heard of Ebola virus?” he began. “How many of you want to get Ebola? Me neither. That’s part of what my research is about.”

When Connor finished, one of the four nonexperts, Scott Paré, BU deputy director of public safety and deputy police chief, accurately summed up the scientist’s work: “So, some people can fight Ebola off, some people can’t. How can you tell who’s who? That’s what you want to know, right?” Right, nodded Connor. 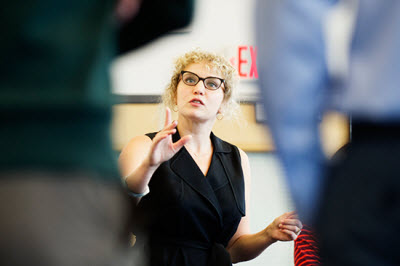 “A lot of scientists think they need to stand up, put on their expert science suit, and be formal,” says Alda Center improv instructor Louisa Johnson, “but it doesn’t work.”Photo credit: Jackie RicciardiThe scientists next split into groups, where facilitators led them through a series of improv exercises, a key part of the workshop. In addition to the mirror exercise, the scientists played catch with imaginary Ping-Pong balls, and explained smartphones and X-rays to visitors from 1700. As the sometimes straightlaced scientists opened up and expressed themselves, they also learned valuable lessons about the importance of storytelling and about tactics for connecting with an audience.

“I see improv as an exercise in authenticity—taking something off as opposed to putting something on,” said Alda Center improv instructor and trained actor Louisa Johnson, who led one of the groups. “A lot of scientists think they need to stand up, put on their expert science suit, and be formal, but it doesn’t work. Even they don’t like it.” Through the exercises, Johnson urged the scientists to talk to an audience the way they speak to their friends and kids, and to use the whole “conversational toolkit” they use in daily life: eye contact, interaction, humor, storytelling, and empathy.

While some of the scientists thought the improv sessions were “a little too touchy-feely,” others found them valuable. “I thought they were great,” said Tim Gardner, a CAS assistant professor of biology and a College of Engineering assistant professor of biomedical engineering. “They gave me an experiential memory of an important lesson—how to connect with an audience and change tactics in real time.” Gardner said he’s given some of his best scientific lectures after forgetting his PowerPoint presentation and winging it on a whiteboard. While he’s not ready to ditch his slides altogether—“Improv has its limits,” he says—he’d like to find a way to work more flexibility, spontaneity, and interaction into his presentations.

The exercises also led to deeper conversations among the scientists about the importance of connecting with the public, their worries about seeming inauthentic, their concern that communication skills are not rewarded in academia, and their frustration at being shouted down by vitriolic, ill-informed bloggers. Many of the scientists requested more workshops and ongoing media training.

“I grew up in a time when everyone understood the importance of science and scientists,” said Corley. “But we went through a couple of decades where we didn’t feel the need to communicate with the public, and now we’ve lost them. We need to find new ways to engage them and make our message heard.”