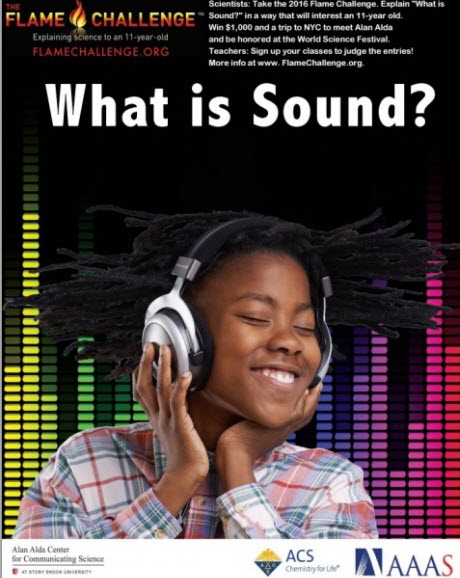 Alan Alda’s 2016 ‘Flame Challenge”: What Is Sound?Image courtesy of the Alan Alda Center for Communicating ScienceNewswise — STONY BROOK, NY, November 2, 2015 –After reviewing hundreds of questions submitted by children from around the world, the 2016 Flame Challenge will ask the burning question, “What is sound?” The Alan Alda Center for Communicating Science at Stony Brook University is challenging scientists to answer that resounding question in video or written form.

An international contest now in its fifth year, the Flame Challenge is judged by 11-year-olds around the world, challenging scientists at every level – from graduate students to senior researchers – to answer and communicate familiar yet complex concepts in a way that is understandable to an 11-year-old.

"I came up with this contest as a fun challenge for scientists to explain a complex thing like a flame in a way that would make it clear to an 11-year-old,” said actor, writer and science advocate Alan Alda, a visiting professor at Stony Brook University. “The idea was to urge scientists to communicate more clearly. I didn't realize what an extraordinary learning experience it was going to be for the 11-year-olds. By now, tens of thousands of kids from all over the world have excitedly delved into the mysteries of nature as they've judged the scientists' entries.

"There are so many ways in which sounds affect us, so many ways that different animals use sound, and so many kinds of sound,” Alda said. “I can't wait to see how creatively scientists will explain exactly what sound is. The kids and I are all ears."

The Flame Challenge offers a $1,000 cash prize for scientists in each category. The winning scientists will also receive a trip to New York City where they will meet Alan Alda and be honored at the 2016 World Science Festival. The Flame Challenge is sponsored by the American Chemical Society (ACS) and the AAAS.

"The ingenuity of the Flame Challenge is that participating students bring a new source of creativity and take away the lesson that science is fun," said 2016 ACS President Donna Nelson.

Keziah Job, an 11-year-old sixth grade student from Lynbrook South Middle School in Lynbrook, New York, was one of the students who came up with this year’s question.

"I hope that they tell me what sound is,” said Keziah, when asked what she hopes the contest’s scientists will tell her about her question. “I'm speaking and I want to know what makes up the sound."

Aidan Green, a fifth grade student from Maungatapu Primary School in Tauranga, New Zealand, also asked this year’s question. "I like to listen to the sounds around me and wonder how they all sound different?” said Aidan. “What makes them do that?"

The Flame Challenge began in 2011 Alda, an actor and science advocate, proposed to scientists his childhood query: What is a flame? Since then, children have submitted thousands of questions, out of which the contest questions have been selected. In 2014, scientists wrestled with “What is color?” In 2015, they took on “What is sleep?”

Last year, 20,000 students from states, including New York, Texas and California, as well as countries, such as India, Germany and New Zealand registered through their schools to serve as Flame Challenge judges.

The 2015 contest winners were Brandon Aldinger of Renfrew, Pennsylvania and Eric C. Galicia of Des Plaines, Illinois. For Aldinger, the contest was a chance to inspire kids.

“Science is an incredibly rewarding profession and pastime,” Aldinger said. “It is critical to expose kids to science in a way that they can understand, especially as they dream about careers that will guide their later schooling.”

“I've always been a big advocate of being able to explain advanced topics in physics to anybody, especially children,” said Galicia. “One of my chemistry teachers once said, ‘If you can't explain it to a five-year-old, then you don't know what you're talking about.’ I believe this to be true.”

For information on how to enter the contest, scientists looking to enter the contest and for 5th-grade teachers who are interested in having their classes participate as judges visit, www.FlameChallenge.org. The website also contains past winning entries and tips from previous winners about crafting a good entry.