Experiments in mice by researchers at Johns Hopkins suggest that if the goal is to ease or extinguish fearful emotional memories like those associated with post-traumatic stress disorder, alcohol may make things worse, not better. Results of their study demonstrate, they say, that alcohol strengthens emotional memories associated with fearful experiences and prevents mice from pushing aside their fears. 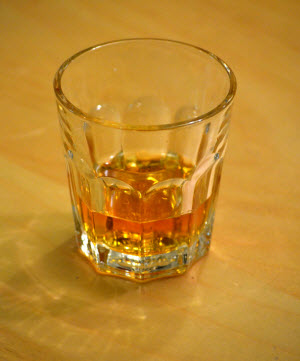 "If the effects of alcohol on memories to fearful responses are similar in humans to what we observe in mice, then it seems that our work helps us better understand how traumatic memories form and how to target better therapies for people in therapy for PTSD," researcher says.Photo credit: Guinnog, Wikimedia CommonsIn a summary of their findings, published online Jan. 3 in Translational Psychiatry, the researchers say their experiments also identified what they believe is the molecular mechanism responsible for alcohol-related fear relapses and successfully used a drug, perampanel—currently used to treat epileptic seizures—that reverses the malingering effects.

"If the effects of alcohol on memories to fearful responses are similar in humans to what we observe in mice, then it seems that our work helps us better understand how traumatic memories form and how to target better therapies for people in therapy for PTSD. In fact, binge drinking or other attempts to use alcohol to self-medicate could be sabotaging any therapy efforts," says Norman Haughey, PhD, professor of neurology at the Johns Hopkins University School of Medicine. Researchers estimate that 60 to 80 percent of people with PTSD binge drink as a means of "self-medication."

To explore the effect of alcohol on the ability to extinguish fear responses from unpleasant memories, the investigators placed mice in cages with an electrified floor grid and played six tones paired with an electric shock—the "fear training" needed as a model for PTSD. The next day, mice were split into two groups: one control group received water, and the other received water mixed with 20 percent ethanol—drinking alcohol—in their water bottles for two hours.

Then, mice were placed in a different textured box into which researchers played the tone to retrieve the memory of the situation the day before. After 15 minutes, the researchers moved the mice back to the cages with the special floor grids and played 18 tones at 10-second intervals without a shock to try to "dissociate" the fear response to the tones.

Both groups of mice showed less "freezing" behavior—a stock-still stance suggesting fear—the longer the tones played. The next day, the mice were moved back to the special cages, where they heard four more tones. The researchers used motion-sensitive software to measure the percent of the time the mice froze in place.

Next, the team observed how alcohol affected fear relapse at the molecular level. Based on past studies from several animal researchers, the Johns Hopkins team knew that extinguishing fearful memories requires receptors for the neurotransmitter glutamate. When chemical phosphate groups are added to the receptors, they move from the cytoplasm and cluster on the edges of nerve cells along synapses—the spaces between nerve cells where messages transmit from one cell to another.

The researchers took samples of brain tissue from the mice given the alcohol and those given only water at different points in the experiment: after the fear training, after the reminder of the fear with the tones, after the training to dissociate the fear of tone from the shock, and the next day when they retested them for fear relapse. They then used antibodies against the glutamate receptor GluR1, including some that specifically detected GluR1 with the phosphate groups at the edge of synapses.

Next, the researchers wanted to see if blocking the GluR1 receptors from receiving signals from the chemical messenger glutamate would allow the mice given alcohol to forget their fear by dissociating the emotional response from the memory. They gave the mice 5 milligrams per kilogram of the glutamate receptor blocker perampanel after the point in the experiment when they were reminded of the fear, at the time when there were much higher levels of GluR1 receptor at the synapses. They then tested the rodents' fear relapse responses using the motion-sensitive software that detected freezing as the tones played. In this set of experiments, the mice given alcohol and the drug froze a little over 20 percent of the time, and mice given alcohol without the drug froze about 40 percent of the time. The researchers say that the glutamate receptor blocker drug seemed to reduce fear relapses in the mice given alcohol.

"It may be possible to improve the effectiveness of psychotherapy in people with PTSD by using glutamate receptor blockers during desensitization sessions when patients re-enact or remember the fearful situation," says Haughey.

His team plans to continue examining the details of this pathway under varying conditions. "The reality is that people with PTSD are a lot more complex than mice in a lab, and someone with PTSD may be on a variety of antianxiety medications, antidepressants or even sleep aids," he says. "These drugs, together with alcohol, may affect the ability to let go of fearful memories in different ways." They are also reaching out to drug industry partners to investigate the potential of initiating human trials to test glutamate blockers as PTSD therapeutics, which may take several years to assemble.

According to the National Center for PTSD in the U.S. Department of Veterans Affairs, about eight percent of the population will have PTSD at some point in their lives. Anywhere from 11 to 20 percent of U.S. veterans have PTSD in any given year.