This diagram depicts the major milestones in the evolution of the Universe since the Big Bang, about 13.8 billion years ago. It is not to scale. The Universe was in a neutral state at 400 thousand years after the Big Bang and remained that way until light from the first generation of stars started to ionize the hydrogen. After several hundred million years, the gas in the Universe was completely ionized.Image Courtesy of: NAOJ

A team of astronomers has used the Atacama Large Millimeter/submillimeter Array (ALMA) to detect glowing oxygen in a distant galaxy seen just 700 million years after the Big Bang. This is the most distant galaxy in which oxygen has ever been unambiguously detected, and it is most likely being ionized by powerful radiation from young giant stars. This galaxy could be an example of one type of source responsible for cosmic reionization in the early history of the Universe.

The astronomers used ALMA to observe one of the most distant galaxies known. SXDF-NB1006-2 lies at a redshift of 7.2, meaning that we see it only 700 million years after the Big Bang. 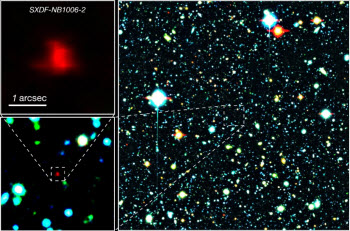 Color composite image of a portion of the Subaru XMM-Newton Deep Survey Field. Right panel: The red galaxy at the center of the image is the very distant galaxy, SXDF-NB1006-2. Left panels: Close-ups of the distant galaxy.Image Courtesy of: NAOJThe team was hoping to find out about the heavy chemical elements [1] present in the galaxy, as they can tell us about the level of star formation, and hence provide clues about the period in the history of the Universe known as cosmic reionization.

"Seeking heavy elements in the early Universe is an essential approach to explore the star formation activity in that period," said Akio Inoue of Osaka Sangyo University, Japan, the lead author of the research paper, which is being published in the journal Science. "Studying heavy elements also gives us a hint to understand how the galaxies were formed and what caused the cosmic reionization," he added.

In the time before objects formed in the Universe, it was filled with electrically neutral gas. But when the first objects began to shine, a few hundred million years after the Big Bang, they emitted powerful radiation that started to break up those neutral atoms—to ionize the gas. During this phase—known as cosmic reionization—the whole Universe changed dramatically. But there is much debate about exactly what kind of objects caused the reionization. Studying the conditions in very distant galaxies can help to answer this question.

Before observing the distant galaxy, the researchers performed computer simulations to predict how easily they could expect to see evidence of ionized oxygen with ALMA. They also considered observations of similar galaxies that are much closer to Earth, and concluded that the oxygen emission should be detectable, even at vast distances [2].

They then carried out high-sensitivity observations with ALMA [3] and found light from ionized oxygen in SXDF-NB1006-2, making this the most distant unambiguous detection of oxygen ever obtained [4]. It is firm evidence for the presence of oxygen in the early Universe, only 700 million years after the Big Bang.

Oxygen in SXDF-NB1006-2 was found to be ten times less abundant than it is in the Sun. “The small abundance is expected because the Universe was still young and had a short history of star formation at that time,” commented Naoki Yoshida at the University of Tokyo. “Our simulation actually predicted an abundance ten times smaller than the Sun. But we have another, unexpected, result: a very small amount of dust.” 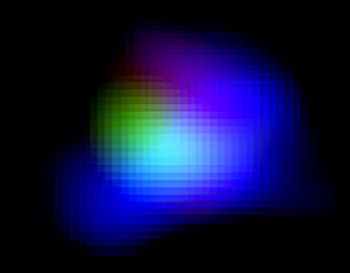 Color composite image of distant galaxy SXDF-NB1006-2. Light from ionized oxygen detected by ALMA is shown in green. Light from ionized hydrogen detected by the Subaru Telescope and ultraviolet light detected by the UK Infrared Telescope (UKIRT) are shown in blue and red, respectively.Image Courtesy of: NAOJThe team was unable to detect any emission from carbon in the galaxy, suggesting that this young galaxy contains very little un-ionized hydrogen gas, and also found that it contains only a small amount of dust, which is made up of heavy elements. “Something unusual may be happening in this galaxy,” said Inoue. “I suspect that almost all the gas is highly ionized.”

The detection of ionized oxygen indicates that many very brilliant stars, several dozen times more massive than the Sun, have formed in the galaxy and are emitting the intense ultraviolet light needed to ionize the oxygen atoms.

The lack of dust in the galaxy allows the intense ultraviolet light to escape and ionize vast amounts of gas outside the galaxy. “SXDF-NB1006-2 would be a prototype of the light sources responsible for the cosmic reionization,” said Inoue.

"This is an important step towards understanding what kind of objects caused cosmic reionization,” explained Yoichi Tamura of the University of Tokyo. “Our next observations with ALMA have already started. Higher resolution observations will allow us to see the distribution and motion of ionized oxygen in the galaxy and provide vital information to help us understand the properties of the galaxy."

[1] In astronomical terminology, chemical elements heavier than lithium are known as heavy elements.

[2] The Japanese infrared astronomy satellite AKARI had found that this oxygen emission is very bright in the Large Magellanic Cloud, which has an environment similar to the early Universe.

[4] Earlier work by Finkelstein et al. suggested the presence of oxygen at a slightly earlier time, but there was no direct detection of an emission line, as is the case in the new work.

This research was presented in the paper titled: “Detection of an oxygen emission line from a high redshift galaxy in the reionization epoch” by Inoue et al., published in the journal Science.