University of Virginia School of Medicine researchers have identified promising drugs that could lead to the first antidote for radiation exposure that might result from a dirty bomb terror attack or a nuclear accident such as Chernobyl.

Some of the compounds, including the drug rapamycin, have previously been shown to extend life in organisms such as worms and flies, though it’s unknown if they would have the same benefit in humans. UVA’s research suggests that these compounds, or similar drugs, might counter the deadly effects of ionizing radiation. 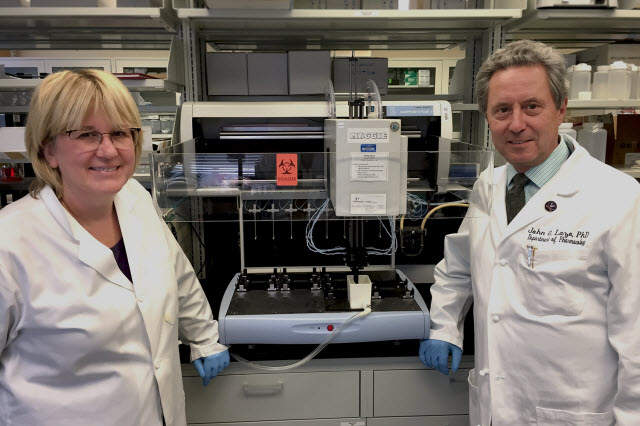 Elizabeth R. Sharlow and John S. Lazo are developing what would be the first antidote to radiation exposure.Photo courtesy of the University of Virginia

Currently there is no cure for exposure to lethal doses of radiation; for such patients, doctors can only try to ease their suffering until death. “If you’re exposed to a very, very high dose, it’s rapid deterioration and immediate death,” said John S. Lazo, of UVA’s Department of Pharmacology. “It’s the lower doses that people, particularly governments, are concerned about—the type of exposure that might result from a dirty bomb or a nuclear accident. How do we alleviate the effects? What’s the antidote? Right now, we just don’t have anything.”

Lazo and his colleague Elizabeth R. Sharlow screened a library of more than 3,400 existing drugs, vitamins, and other compounds to identify ones that might help cells withstand the effects of radiation exposure. The goal was to keep stem cells—the cells that produce the various cell types in the body—alive long enough to repair the damage caused by radiation.

“We wanted to find already approved drugs that would potentially keep stem cells, or progenitor cells, alive after radiation exposure,” Sharlow said. “That’s very much of interest to the [National Institutes of Health] right now: How can we keep those self-renewing populations alive so they can actually help heal the effects of radiation exposure?”

After they identified potential leads, Sharlow created 3-D computer models to compare the substances’ chemical structures. That analysis identified a cluster of promising compounds with similar structures—a tantalizing lead in the quest for an antidote.

“If you’re a drug hunter, the way we are, this is really cool information,” Lazo said. “Because you can say, ‘Now I will look in the universe of 40 million compounds. What else looks like that? Are they useful?’”

He noted that it is unlikely any one drug or compound will work on its own. “A lot of us in this field think it will be a cocktail of things you take,” he said. “And if you think you need cocktails, you need the individual ingredients. That’s why we think this is pretty important—because it’s providing new ingredients for that cocktail.”

The work was supported by the National Institutes of Health’s National Institute of Allergy and Infectious Diseases [1U19AI68021], the Fiske Drug Discovery Fund, the Owens Family Foundation, and the Cure Alzheimer’s Fund.