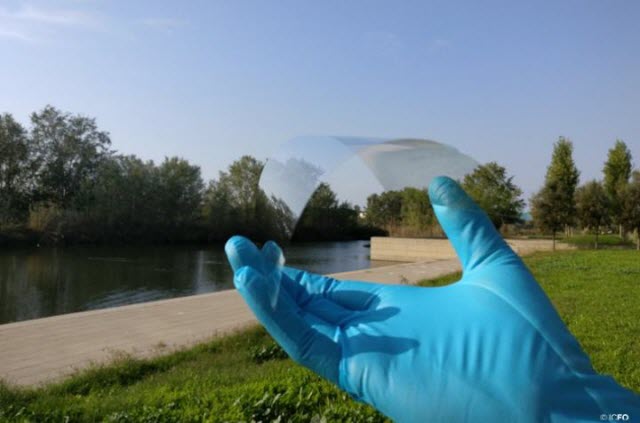 Transparent conductors are one of the key elements of today's electronic and optoelectronic devices such as displays, light emitting diodes, photovoltaic cells, smart phones, etc. Most of the current technology is based on the use of the semiconductor Indium Tin Oxide (ITO) as a transparent conducting material. However, even though ITO presents several exceptional properties, such as a large transmission and low resistance, it still lacks mechanical flexibility, needs to be processed under high temperatures and is expensive to produce.

An intensive effort has been devoted to the search of alternative TC materials that could definitively replace ITO, especially in the search for device flexibility. While the scientific community has investigated materials such as Al-doped ZnO (AZO), carbon nanotubes, metal nanowires, ultrathin metals, conducting polymers and most recently graphene, none of these have been able to present optimal properties that would make them the candidate to replace ITO.

In their study, ICFO researchers applied an Al doped ZnO overcoat and a TiO2 undercoat layer with precise thicknesses to a highly conductive Ag ultrathin film. By using destructive interference, the researchers showed that the proposed multilayer structure could lead to an optical loss of approximately 1.6% and an optical transmission greater than 98% in the visible. As Pruneri states, "we have used a simple design to achieve a transparent conductor with the highest performance to date and at the same time other outstanding attributes required for relevant applications in industry." This result represents a record fourfold improvement in figure of merit over ITO and also presents superior mechanical flexibility in comparison to this material.

The results of this study show the potential that this multilayer structure could have in future technologies that aim at more efficient and flexible electronic and optoelectronic devices.