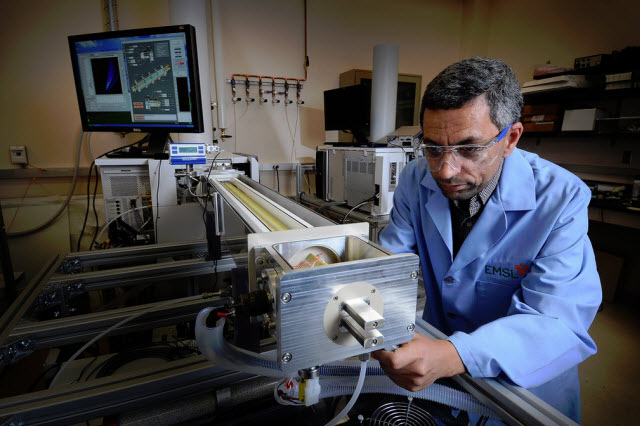 Yehia Ibrahim, a scientist at Pacific Northwest National Laboratory, is part of a team that developed the new Ion Mobility Spectrometry-Mass Spectrometry Proteomics system at EMSL, the Environmental Molecular Sciences Laboratory, a national scientific user facility at PNNL. A suite of analytical technologies that incorporate mass spectrometers developed at PNNL and EMSL recently realized $10 million in licensing income for PNNL and its operator Battelle.Pacific Northwest National LaboratoryRichland, Wash – A suite of analytical innovations used to detect and measure very low levels of compounds and elements for environmental, national security and health applications has topped $10 million in licensing income for Pacific Northwest National Laboratory and its operator Battelle.

Most of the money has been directly reinvested in new research programs, demonstration projects, laboratory equipment and staff at the Department of Energy national laboratory in Richland, or reinvested by Battelle in research-related activities consistent with its non-profit mission.

The technologies were developed at PNNL as well as at EMSL, DOE's Environmental Molecular Sciences Laboratory on the PNNL campus.

It's the first time that income tied to a specific technology developed at PNNL has reached this level. The income was earned from multiple licenses over nearly a 20-year period. The annual amount has steadily increased over the past five years.

Since 1989, dozens of PNNL researchers have been enhancing the performance of mass spectrometers — at first for use in PNNL's own environmental, national security and health-related research programs, and then as part of efforts to improve the science impact of mass spectrometers in the marketplace.

Mass spectrometry is an ultra-sensitive analytical technique that helps identify and measure the amount and type of elements, molecules and isotopes present in samples ranging from soils to proteins. It's widely used to analyze samples in the biotechnology, environmental, biofuel, national security, medical and drug testing fields. The technology is used in early detection of disease biomarkers and environmental contaminants, quality assurance and the development of new products.

Through licenses, PNNL has transferred the technology enhancements to many companies, including Agilent Technologies in Santa Clara, Calif.; Bruker Daltonics in Billerica, Mass.; Thermo Fisher Scientific in Waltham, Mass., and several others. These firms are manufacturing and selling mass spectrometers to customers worldwide.

"Based upon the royalty rates in the various licenses, it is estimated that the royalties received by PNNL represent more than 5,000 mass spectrometer instruments sold to date that were based in part on PNNL intellectual property," said Bruce Harrer, a PNNL commercialization manager.

"We've benefited greatly from PNNL's developments," said John Fjeldsted, Agilent Technology's senior director of ion mobility for Agilent's Mass Spectrometry Division. "One of the PNNL technologies — the ion funnel — has made significant contributions to the sensitivity of our top-tier products, including those involving ion mobility and time-of-flight measurements."

PNNL works with mass spectrometer manufacturers to develop and commercialize these technologies through an active program of collaborative research and development projects. "We have had a number of collaborative R&D projects with PNNL over the past 20 years, many of which have led to important advances in the field," said Iain Mylchreest, vice president for research and development in Thermo Fisher's Chromatography and Mass Spectrometry Division.

"Much of the licensing proceeds have been reinvested at PNNL and, by extension, have benefited the Mid-Columbia region," explained Cheryl Cejka, director of Technology Deployment & Outreach at PNNL.

Under Battelle's contract to manage and operate PNNL for DOE, Battelle and DOE may share the costs of bringing a technology to the point that it can be licensed and then share in any proceeds. This long-term partnership has enabled substantial reinvestment in the form of new research projects and additional capabilities at PNNL, such as new mass spectrometer instruments.

"In addition to advancing scientific discovery, this arrangement is a win-win for taxpayers, DOE and Battelle," said Cejka. "Taxpayers and society at large benefit from the deployment of new products in the marketplace. The government benefits from the investments made into federally-owned laboratory capabilities. Battelle benefits from the reinvestment of net proceeds into new facilities, equipment, staff capabilities or further research and technology development projects."

The Beat Goes On

At PNNL and EMSL researchers continue to further develop and utilize mass spectrometry technology. Researchers in PNNL's Biological Sciences Division have recently been awarded several patents for developing a new technology capable of separating and manipulating ions, which can be used to improve the sensitivity and power of mass spectrometers.

Mass spectrometers are also being further developed and extensively used in PNNL's national security programs, including those directed at detecting and classifying radioactive materials and explosive compounds.

At EMSL, researchers use more than a dozen mass spectrometers — some PNNL-designed and built, others purchased — to advance understanding and make discoveries in the fields of biofuels, health, climate and environmental remediation. EMSL's new 21 Tesla Fourier Transform Ion Cyclotron Resonance Mass Spectrometer, manufactured by Agilent and co-developed with EMSL, is one of the two strongest in the world.