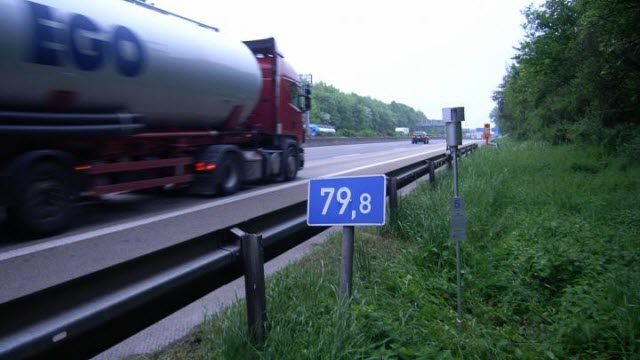 Sampling containers collected airborne particles from the sides of highways in Germany as part of a study led by the University of Pennsylvania's Reto Gieré. The findings suggest that tire wear is a major contributor to roadside pollution.Courtesy of Reto Gieré

Everyone knows that cars contribute to air pollution. And when most people consider the source, exhaust is usually what comes to mind.

However, new research led by the University of Pennsylvania's Reto Gieré, working with collaborators across the world, is helping to illuminate another significant culprit when it comes to traffic-related air pollution: Tiny bits of tires, brake pads, and road materials that become suspended in the air when vehicles pass over.

"More and more I've noticed that we don't know enough about what is on our roads," says Gieré, professor and chair of Penn's Department of Earth and Environmental Science in the School of Arts and Sciences. "If you have lots of traffic, cars, and trucks driving by, they re-suspend the dust on the roads into the atmosphere, and then it becomes breathable. To understand the potential health implications of these dust particles, it's really important to understand what's on the road."

While regulatory efforts have helped make cars cleaner and more efficient, those restrictions do not address the pollution that arises from tire and brake wear. Increasing urban congestion stands to aggravate these as sources of pollution and possibly adverse health effects.

"About 4 million people die prematurely from air pollution each year," says Gieré. "From unsafe water the number is 2 million. Yet we have a United Nations Sustainable Development Goal about water pollution but not one about the air."

To shed light on the contents of traffic-related dust and the conditions that make it more likely to accumulate, Gieré has teamed with German colleagues from the Federal Highway Research Institute, the German Meteorological Service, and the University of Freiburg to sample and analyze the air along roadsides. In 2017, they published the findings of a year-long sampling effort along two highly frequented motorways in Germany, one subject to more stop-and-go traffic and another in a more rural area bordered by agricultural fields.

To passively collect the dust along the roadsides, they used customized cylindrical samplers with a transparent sticky foil at the bottom to trap particles that make their way in. The researchers checked the collection points and switched out the sticky "trap" weekly.

Using optical microscopy to analyze the collected airborne particles, the team found that the site with busier traffic patterns had 30 percent more particles overall, with a greater fraction derived from tire wear. Weather factored significantly into the patterns they observed; dry and warm conditions were associated with a greater build-up of particles.

"At higher temperatures we saw more tire abrasion, more pollution than at intermediate temperatures," Gieré says. "This was exactly analogous to what two laboratory studies found."

With higher temperatures and more dry spells predicted under climate change, Gieré notes that this problem of tire abrasion may only get worse, "which is significant," he says, "because nearly 30 percent of the microplastics released globally to the oceans are from tires."

In a more recent study, published last month in Aerosol and Air Quality Research, Gieré and colleagues used powerful scanning electron microscopy to more precisely identify the make-up of the particles collected from the two motorways studied in the 2017 report as well as a third collection site, at an urban highway with slower-moving traffic.

"The optical microscope gives us a first approximation," Gieré says, "while the scanning electron microscope allows us to distinguish between tire abrasion, brake abrasion, carbon, or find out if there are minerals in there."

Taking a further step, the team also ran samples through an analysis that provides information about the elements that compose each specimen, called energy-dispersive X-ray spectroscopy.

This study focused on the "super coarse" particles collected, those greater than 10 micrometers in size. (For comparison, a human hair is roughly 75 micrometers in diameter.) While still tiny, these particles pose less of a health threat than those even smaller, which are more easily inhaled. Still, these larger particles can wind up in waterways and soil, affecting wildlife or possibly even agricultural crops.

Ninety percent of the dust particles collected from the three sites were traffic-related and the researchers again saw differences between the sites. The slower-moving traffic on the urban road generated fewer particles from brake wear but more from tires; they noted that the tire rubber became encrusted with minerals and other materials from the roads. The highway with more stop-and-go traffic generated more brake particles.

Tire and brake pad manufacturers do not disclose all the contents of their products, but it's known that zinc, lead, antimony, silicates, cadmium, and asbestos are used by some. These are chemicals that can pose a health risk if they get into the environment or, if the tires are burned as they sometimes are by coal plants, the atmosphere.

"These coarse particles aren't going to be transported very far, so pollution is going to be restricted to the vicinity of these roads, especially during congestion," Gieré says. "But they do also collect on the road and then wash into rivers. Our team believes that's a major pathway of how microplastics get into waterways."

One way to reduce this avenue of pollution would be traffic-calming measures, such as coordinated traffic lights, that reduce the amount of starting and stopping that drivers must perform. Gieré and colleagues, including Ph.D. student Michael O'Shea, are also performing similar experiments on the streets of Philadelphia and comparing the pollution levels between different neighborhoods to see what is happening a little closer to home.