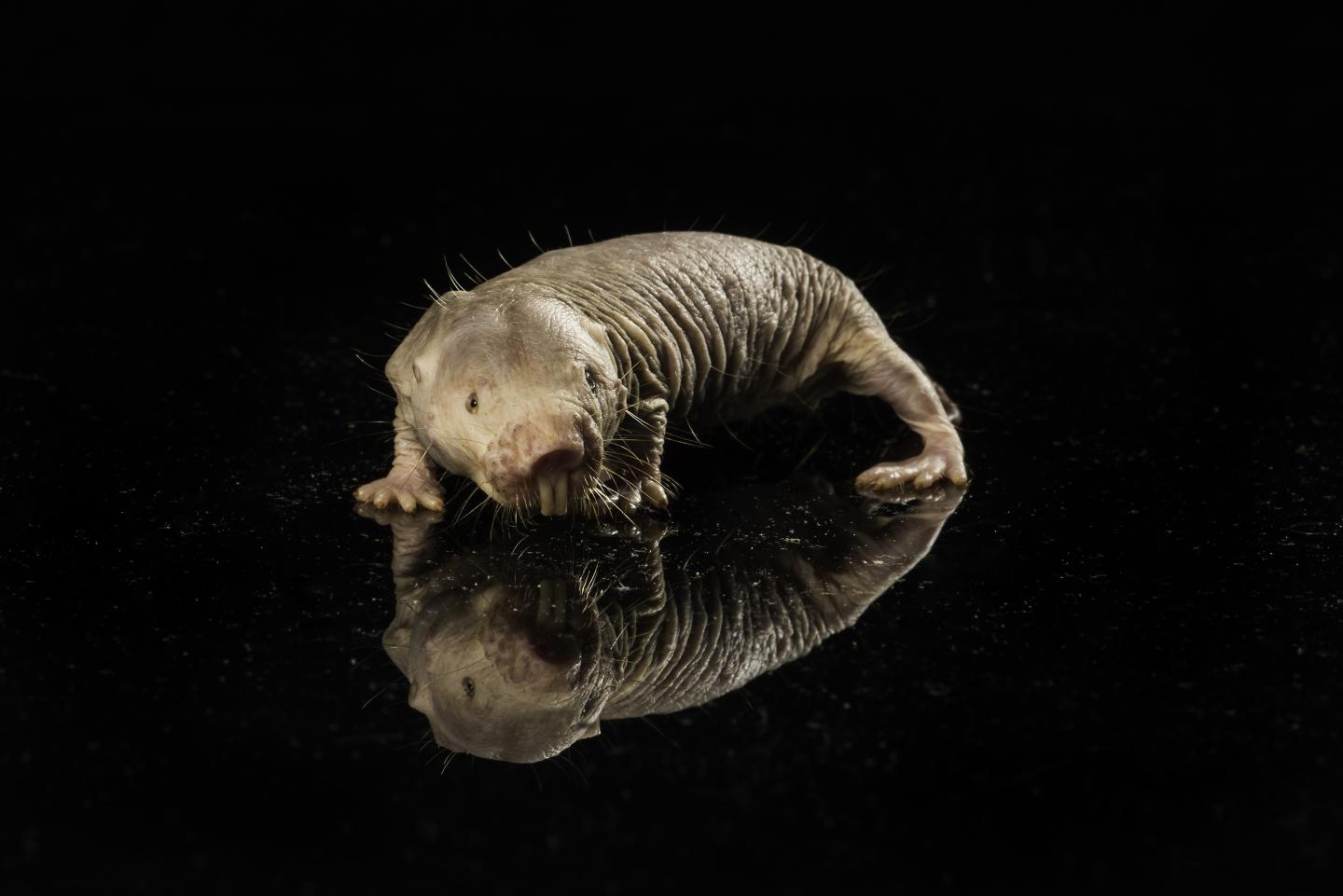 Naked mole rats are intriguing for researchers for a variety of reasons: they have the longest life span of rodents (average lifespan is 30 years), they are resistant to a variety of age-related diseases such as cancer, and they tend to remain fit and active until very advanced ages. The Gorbunova Lab at the University of Rochester studies these rodents in the hopes of unraveling their unique anti-cancer properties.Photo Source: University of Rochester photo/J. Adam Fenster

With their large buck teeth and wrinkled, hairless bodies, naked mole rats won't be winning any awards for cutest rodent. But their long life span—they can live up to 30 years, the longest of any rodent—and remarkable resistance to age-related diseases, offer scientists key clues to the mysteries of aging and cancer.

That's why University of Rochester biology professors Vera Gorbunova and Andrei Seluanov and postdoctoral associate Yang Zhao studied naked mole rats to see if the rodents exhibit an anticancer mechanism called cellular senescence—and, if so, "how the mechanism might work differently than in short-lived animals, like mice," says Zhao, the lead author of the study, published in PNAS.

Cellular senescence is an evolutionary adaptation that prevents damaged cells from dividing out of control and developing into full-blown cancer. However, senescence has a negative side too: by stopping cell division in order to prevent potential tumors, it also accelerates aging.

Previous studies indicated that when cells that had undergone senescence were removed from mice, the mice were less frail in advanced age as compared to mice that aged naturally with senescent cells intact.

But is eliminating senescence actually the key to preventing or reversing age-related diseases, namely cancer?

"In humans, as in mice, aging and cancer have competing interests," Gorbunova says. "In order to prevent cancer, you need to stop cells from dividing. However, to prevent aging, you want to keep cells dividing in order to replenish tissues."

Gorbunova and Seluanov have long researched cancer and its relation to aging and DNA repair. They have identified several mechanisms that contribute to longevity and cancer resistance in naked mole rats, including the chemical HMW-HA (high molecular weight hyaluronan). But they believe there are more pieces to the puzzle.

In their recent study, Zhao, Seluanov, Gorbunova, and their collaborators compared the senescence response of naked mole rats to that of mice, which live a tenth as long—only about two to three years. "We wanted to look at these animals that pretty much don't age and see if they also had senescent cells or if they evolved to get rid of cell senescence," Seluanov says.

Their unexpected discovery? Naked mole rats do experience cellular senescence, yet they continue to live long, healthy lives; eliminating the senescence mechanism is not the key to their long life span. "It was surprising to us that despite its remarkable longevity the naked mole rat has cells that undergo senescence like mouse cells," Gorbunova says.

The researchers found that although naked mole rats exhibited cellular senescence similar to mice, their senescent cells also displayed unique features that may contribute to their cancer resistance and longevity.

The cellular senescence mechanism permanently arrests a cell to prevent it from dividing, but the cell still continues to metabolize. The researchers found that naked mole rats are able to more strongly inhibit the metabolic process of the senescent cells, resulting in higher resistance to the damaging effects of senescence.

Although evolution of a long life span does not eliminate senescence, the more structured response to senescence may have an evolutionary basis, Zhao says: "We believe there was some strategy during the evolution of naked mole rats that allowed them to have more systematic changes in their genes and have more orchestrated pathways being regulated. We believe this is beneficial for longevity and cancer resistance."