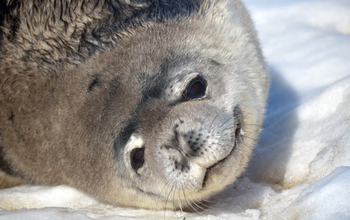 A Weddell seal in Antarctica.Peter Rejcek, NSFWeddell seals have biological adaptations that allow them to dive deep--as much as of hundreds of meters--while hunting, but also an uncanny ability to find the breathing holes they need on the surface of the ice. Now, researchers supported by the National Science Foundation (NSF) believe they have figured out how they do it--by using the Earth's magnetic field as a natural GPS.

"This animal, we think, may be highly evolved with an ability to navigate using magnetic sense in order to find ice holes some distance apart and get back to them safely," explained Randall Davis of the Department of Marine Biology at Texas A&M University.

If the hypothesis turns out to be true, it would represent the first evidence of such a trait in a marine mammal.

Highlights of the research have been captured on video in underwater images and in interviews by Peter Rejcek and Ralph Maestas of the Antarctic Sun newspaper, which is published by the U.S. Antarctic Program (USAP). NSF manages the USAP, which coordinates all U.S. research on the Southernmost continent.

The question of how seals navigate is more than academic. It's about life and death for the animals, which like all mammals, require oxygen to breathe, despite their mostly aquatic environment. Time spent looking for a new place to surface after each dive would not only be inefficient given the energy required to swim and hunt, but failure to locate a hole in the ice means the animal would drown.

"These animals are doing a remarkable amount of exercise all while on breath hold," noted Terrie Williams, a professor of ecology and evolutionary biology at the University of California, Santa Cruz. She is an expert on physiology in the Weddell seal, an animal whose apparent lethargy on the surface of the sea ice belies an amazing athleticism below it.

"The reason a seal wants to be efficient is that they have a limited amount of oxygen onboard," she explained. "The trick is conserving that 'scuba tank' on a dive."

Davis, Williams and another colleague, Lee Fuiman, associate director of the University of Texas' Marine Science Institute in Port Aransas, have been studying the behavior of Weddell's for decades.

The idea that Weddell seals can an unerringly follow magnetic lines dates back to the late 1990s when the team first started working together in Antarctica. Fuiman said he was struck by data from the very beginning that showed the seals returning to dive holes with amazing precision.

"The animal always found its way back. It's like he knew exactly where the hole was," Fuiman said. "I couldn't figure out how they would do that. How did they know where they were by the time they turned around?"

The behavior from dive profiles is intriguing but not conclusive. So, how to determine whether Weddell seals, like homing pigeons, are using magnetic lines to weave their way back home?

For the next three years, the team will work with a handful of Weddell seals. Each animal will be outfitted with a Video and Data Recorder and released into three areas over the course of a couple of weeks in McMurdo Sound, where researchers have precisely mapped the magnetic field.

"There should be changes in behavior when an animal is in a different magnetic field," Fuiman explained.

In other words, comparing the magnetic anomaly maps of McMurdo Sound with dive profiles from the video and data recorder should provide some answers.

"That will give us the amount of data that we need to statistically analyze the information to look for these hypothesized behaviors," Davis said.

Next year, the group will return to Antarctica in August toward the end of the Antarctic winter, when there are still 24 hours of darkness. Davis said it's possible Weddells may be using other strategies for relocating holes in the sea ice with apparent ease. One possible explanation involves the idea of piloting--using under-ice visual features, such as cracks in the ice, to navigate.

However, without light penetrating the ice during winter darkness, the team can eliminate another factor.

"Magnetic sense isn't the only sense that seals use for orientation," Davis said. "What we're trying to do is separate pilotage from navigation."

Another sense that may be in place is hearing. Seals may be receiving acoustic cues on where breathing holes are located from other Weddells. In that case, Davis explained the team is using a directional hydrophone to pinpoint the direction of vocalization.

"Being able to travel reliably between sparsely located breathing holes is absolutely critical for their ability to live under this ice," Davis said. "We're trying to take away as many other potential orientation abilities of this animal and focus on this one aspect, which is the magnetic orientation."

The research was supported by collaborative NSF awards to Davis, Fuiman and Williams.