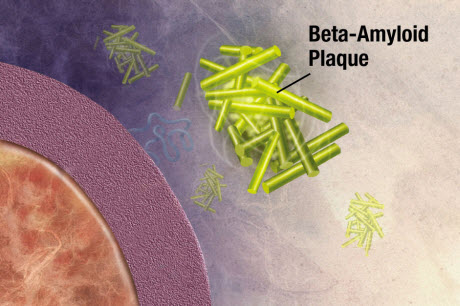 Enzymes act on the APP (amyloid precursor protein) and cut it into fragments. The beta-amyloid fragment is crucial in the formation of senile plaques in Alzheimer's disease.National Institute on Aging, Wikimedia CommonsLong-term treatment with broad spectrum antibiotics decreased levels of amyloid plaques, a hallmark of Alzheimer's disease, and activated inflammatory microglial cells in the brains of mice in a new study by neuroscientists from the University of Chicago.

The study, published July 21, 2016, in Scientific Reports, also showed significant changes in the gut microbiome after antibiotic treatment, suggesting the composition and diversity of bacteria in the gut play an important role in regulating immune system activity that impacts progression of Alzheimer's disease.

"We're exploring very new territory in how the gut influences brain health," said Sangram Sisodia, PhD, Thomas Reynolds Sr. Family Professor of Neurosciences at the University of Chicago and senior author of the study. "This is an area that people who work with neurodegenerative diseases are going to be increasingly interested in, because it could have an influence down the road on treatments."

Two of the key features of Alzheimer's disease are the development of amyloidosis, accumulation of amyloid-ß (Aß) peptides in the brain, and inflammation of the microglia, brain cells that perform immune system functions in the central nervous system. Buildup of Aß into plaques plays a central role in the onset of Alzheimer's, while the severity of neuro-inflammation is believed to influence the rate of cognitive decline from the disease.

For this study, Sisodia and his team administered high doses of broad-spectrum antibiotics to mice over five to six months. At the end of this period, genetic analysis of gut bacteria from the antibiotic-treated mice showed that while the total mass of microbes present was roughly the same as in controls, the diversity of the community changed dramatically. The antibiotic-treated mice also showed more than a two-fold decrease in Aß plaques compared to controls, and a significant elevation in the inflammatory state of microglia in the brain. Levels of important signaling chemicals circulating in the blood were also elevated in the treated mice.

While the mechanisms linking these changes is unclear, the study points to the potential in further research on the gut microbiome's influence on the brain and nervous system.

"We don't propose that a long-term course of antibiotics is going to be a treatment—that's just absurd for a whole number of reasons," said Myles Minter, PhD, a postdoctoral scholar in the Department of Neurobiology at UChicago and lead author of the study. "But what this study does is allow us to explore further, now that we're clearly changing the gut microbial population and have new bugs that are more prevalent in mice with altered amyloid deposition after antibiotics."

The study is the result of one the first collaborations from the Microbiome Center, a joint effort by the University of Chicago, the Marine Biological Laboratory, and Argonne National Laboratory to support scientists at all three institutions who are developing new applications and tools to understand and harness the capabilities of microbial systems across different fields. Sisodia, Minter, and their team worked with Eugene B. Chang, Martin Boyer Professor of Medicine at UChicago, and Vanessa Leone, PhD, a postdoctoral scholar in Chang's lab, to analyze the gut microbes of the mice in this study.

Minter said the collaboration was enabling, and highlighted the cross-disciplinary thinking necessary to tackle a seemingly intractable disease like Alzheimer's. "Once you put ideas together from different fields that have largely long been believed to be segregated from one another, the possibilities are really amazing," he said.

Sisodia cautioned that while the current study opens new possibilities for understanding the role of the gut microbiome in Alzheimer's disease, it's just a beginning step.

"There's probably not going to be a cure for Alzheimer's disease for several generations, because we know there are changes occurring in the brain and central nervous system 15 to 20 years before clinical onset," he said. "We have to find ways to intervene when a patient starts showing clinical signs, and if we learn how changes in gut bacteria affect onset or progression, or how the molecules they produce interact with the nervous system, we could use that to create a new kind of personalized medicine."

The study, "Antibiotic-induced perturbations in gut microbial diversity influences neuro-inflammation and amyloidosis in a murine model of Alzheimer's disease," was supported by the Cure Alzheimer's Fund and the National Institute of Diabetes and Digestive and Kidney Diseases. Additional authors include Daina Ringus, Xiaoqiong Zhang, Paul Oyler-Castrillo, and Mark Musch from the University of Chicago; Can Zhang, Joseph Ward, and Rudolph Tanzi from Massachusetts General Hospital; and Fan Liao and David Holtzman from Washington University.