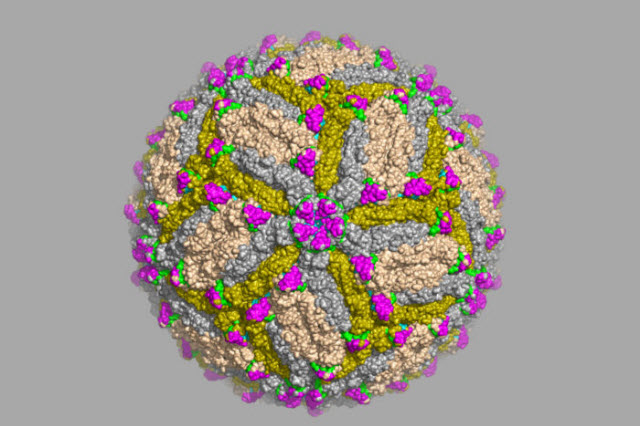 Scientists at Washington University School of Medicine in St. Louis have identified antibodies capable of protecting against Zika virus infection, and located the precise spot on the Zika virus that the antibodies recognize. The work is a significant step toward developing a vaccine, better diagnostic tests and possibly new antibody-based therapies. Shown is an image of Zika virus captured via cryo-electron microscope.Image credit: DAVED FREMONT

Scientists at Washington University School of Medicine in St. Louis have identified antibodies capable of protecting against Zika virus infection, a significant step toward developing a vaccine, better diagnostic tests, and possibly new antibody-based therapies. The work, in mice, helps clarify recent research that also identified protective Zika antibodies but lacked important details on how the antibodies interact with the virus.

In a study published July 27 in Cell, the researchers identified the precise spot on the virus that the antibodies recognized, information that could be used to develop a vaccine against Zika. The antibodies bound exclusively to Zika and not to related viruses, which means they are specific enough to be used in diagnostic tests.

“Importantly, some of our antibodies are able to neutralize African, Asian, and American strains of Zika virus to about the same degree,” said Daved Fremont, PhD, a professor of pathology and immunology and a co-senior author on the paper. A vaccine designed to elicit similar antibodies might be able to protect people from Zika strains worldwide.

Fremont, co-senior author Michael Diamond, MD, PhD, and colleagues identified six antibodies that bound strongly to Zika virus and used a technique called X-ray crystallography to zero in on the binding site. They locked the virus and the antibodies into place together—or crystallized them—and visualized the adjacent structures by bouncing X-rays off them. The two most protective antibodies bound to the same region of the viral envelope protein that covers the surface of the virus.

“We think that this piece of the viral envelope protein alone would be able to elicit a protective immune response to Zika,” Fremont said, referring to the possibility of making a vaccine from an engineered viral protein rather than the whole virus.

Vaccines made from live, weakened viruses are common and effective, but can’t be given to pregnant women. Pregnancy suppresses a woman’s immune system, so a weak virus that safely immunizes most people could make pregnant women ill. In the case of Zika—where viral infection of pregnant women can cause devastating birth defects or miscarriage—a live-virus vaccine would be unusable, but a protein-based vaccine could be a lifesaver.

Despite having recently developed a mouse model of Zika infection during pregnancy, the researchers have not yet tested whether vaccinating mothers with a portion of the Zika envelope protein could protect a fetus from infection.

“The mouse is just not an ideal model for those kind of experiments,” said Diamond, the Herbert S. Gasser Professor of Medicine. In pregnant women, maternal antibodies are transported efficiently across the placenta to protect the fetus. The same is not true in mice, which obtain their mothers’ antibodies mostly after birth. Diamond said that studies to determine whether vaccinating pregnant women against Zika could protect their fetuses likely would need to be done in primates.

The study’s findings are in agreement with a paper published July 14 in Science that identified the same general section of the viral envelope protein as a key site for antibody binding. However, the previous paper lacked the detailed description of how the antibodies interact with the virus, information that could aid in designing a Zika vaccine.

The antibodies described in this study, which reliably distinguished Zika from closely related viruses, also could be incorporated into a diagnostic test. Zika currently is diagnosed primarily by detecting the viral genome, which requires high levels of the virus in the blood and only identifies people who have been infected within a week of being tested. A complementary test would measure the amount of Zika-specific antibodies in people’s blood, which could identify people infected months or years prior. Developing such a test has been hampered by a lack of Zika-specific tools.

Added Fremont, “This is particularly important for pregnant women who want to know whether they were infected with Zika earlier in their pregnancy. The current tests won’t tell us that.”

The antibodies—which protected mice from a lethal dose of Zika in this study—also potentially could be used to treat high-risk patients, such as people with other medical conditions and pregnant women.

“Cost would be an issue, if we’re going to treat a woman for the duration of her pregnancy,” Diamond said. “But in theory, an antibody prophylaxis could protect against infection of the fetus.”

Since the antibodies in this study were obtained from mice, they would need to be modified to be more like human antibodies, before they could be used in people.

The researchers also found a particularly worrisome pattern: Low levels of anti-Zika antibodies—too low to protect against disease—helped the related dengue virus infect cells in a petri dish. People with dengue virus tend to get sicker the second time they are infected, because low levels of antibodies left over from the first infection help the virus invade. Dengue and Zika are both circulating in tropical parts of the Americas, including Brazil. It is possible that people who get infected with dengue after Zika—or after immunization with a Zika vaccine—would develop more severe dengue disease.

“One has to be careful extrapolating from experiments with cells in a lab to what happens to real people,” Diamond said. “Will Zika immunity really exacerbate dengue virus pathogenesis? All we know now is that it’s possible in the laboratory.”