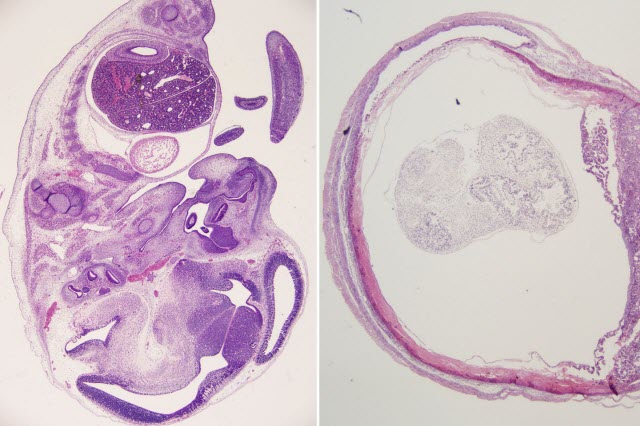 An antibody administered soon after infection with Zika virus protected the fetuses of pregnant mice (left), while the fetuses in infected mice that did not receive the antibody withered away (right). Researchers have identified an antibody that protects against both dengue and Zika disease, a first step toward an antibody-based preventive drug to protect fetuses from brain damage caused by Zika, while also protecting their mothers from Zika and dengue.Image credit: Estefania Fernandez

Brazil and other areas hardest hit by the Zika virus—which can cause babies to be born with abnormally small heads—are also home to dengue virus, which is spread by the same mosquito species.

A new study led by researchers at Washington University School of Medicine in St. Louis shows that an antibody that protects against dengue virus is also effective against Zika in mice.

Antibodies remain in the bloodstream for weeks, so one or a few doses of an antibody-based drug given over the course of a woman's pregnancy potentially could protect her fetus from Zika, with the added benefit of protecting her from both Zika and dengue disease, the researchers said. Dengue causes high fever, severe headaches, and joint and muscle pain in children and adults but does not directly harm fetuses.

"We found that this antibody not only neutralizes the dengue virus but, in mice, protects both adults and fetuses from Zika disease," said Michael S. Diamond, MD, PhD, the Herbert S. Gasser Professor of Medicine and the study's senior author.

The study is published Sept. 25 in Nature Immunology.

Since dengue and Zika are related viruses, the researchers reasoned that an antibody that prevents dengue disease may do the same for Zika. Diamond and graduate student Estefania Fernandez collaborated with Gavin Screaton, MD, DPhil, of Imperial College London, who had generated a panel of human anti-dengue antibodies years before.

The scientists infected nonpregnant adult mice with Zika virus and then administered one of the anti-dengue antibodies one, three or five days after infection. For comparison, another group of mice was infected with Zika virus and then given a placebo. Within three weeks of infection, more than 80 percent of the untreated mice had died, whereas all of the mice that received the anti-dengue antibody within three days of infection were still alive, and 40 percent of those that received the antibody five days after infection survived.

To find out whether the antibody also could protect fetuses from infection, the researchers infected female mice on the sixth day of their pregnancies with Zika virus and then administered a dose of antibody or a placebo one or three days later.

On the 13th day of gestation, the amount of Zika's genetic material was 600,000 times lower in the placentas and 4,900 times lower in the fetal heads from the pregnant mice that were treated one day after infection, compared with mice that received the placebo. However, administering the antibody three days after infection was less effective: It reduced the amount of viral genetic material in the fetal heads nineteenfold and in the placentas twenty-threefold.

These findings suggest that for the antibody to effectively protect fetuses from Zika infection, it must be administered soon after infection. Such a goal may be unrealistic clinically because women rarely know when they get infected.

However, giving women the antibody as soon as they know they are pregnant could provide them with a ready-made defense against the virus should they encounter it. Antibody-based drugs have been used for decades to provide temporary protection against infectious diseases such as rabies when there is no time to vaccinate or, as in the case of Zika, when there is no vaccine available.

The key to using this antibody as a preventive drug would be to make sure that antibody levels in a woman's bloodstream stay high enough to protect her fetus for the duration of her pregnancy.

Diamond and colleagues are working on identifying how much antibody a pregnant woman would need to ensure that her fetus is protected from Zika. They also are exploring ways to extend the antibody's half-life in the blood, to reduce the number of times it would need to be administered.

Having anti-dengue antibodies circulating in the bloodstream for months on end poses a risk, though, because antibodies that protect against one strain of dengue virus sometimes worsen symptoms if a person is infected by another dengue strain.

To avoid the possibility of accidentally aggravating an already very painful disease, the researchers mutated the antibody in four spots, making it impossible for the antibody to exacerbate dengue disease.

"We mutated the antibody so that it could not cause antibody enhancement of dengue infection, and it was still protective," said Diamond, who is also a professor of pathology and immunology, and of molecular microbiology. "So now we have a version of the antibody that would be therapeutic against both viruses and safe for use in a dengue-endemic area, because it is unable to worsen disease."